Friday was a chore day.  Sooner or later it's time to clean the house, unpack suitcases, go get the mail and all of the other mundane things humans have to do once in awhile.  Susun is such a great house keeper.  When she's home, the little straw house practically smiles and shines.  When she's away?  Not so much.

Pee Wee's Big Project yesterday was the SuziQ spare tire.  One of the objectives of our recent road trips has been to find out what shakes loose.  That's why they call such trips "shake down" cruises.  On the Stoneman trip Thursday, the second spare tire got slightly airborne a couple of times when we hit some rough spots going too fast.  In gubmint jargon,  an airborne spare tire is whacha call an "issue of concern."  Soooo....naturally, Pee Wee had to address this "issue of concern" Friday and make sure that space tire stays put.  No more airborne spares, that's our motto!

Luckily, it was a doable one day project and the tire won't fly ever again.  We did a detailed writeup on the Zuki blog this morning.  Click here to read the three now posts there.  Between the housecleaning and the tire gig, the day did fly by. 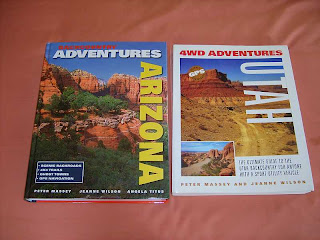 We received two gi-normous books in the mail from Amazon.  The total pages of the two books is 1140! One covers 2760 miles of Arizona back roads and the other covers 3700 miles of Utah back roads.  Our goal over the next ten years is to do them all.  We might not make our goal but we'll sure give it the good ol' college try.

We also finally received an email from teh nice guy who's got the contract for NVUM on the Manti-LaSal Nat'l Forest.  He offered us a mere $120 per interview including transportation and all other expenses.  That's ridiculous.  Last spring we were getting roughly $300 per interview.  We did 7 interviews and grossed $2100.  Our transportation and all other expenses calc'd out to almost $900 so we netted about $1200 of funny money to play for our summertime  camping and river trips.  At the rate of $120 per interview, we'd most likely lose money and actually have to do real work to lose the money. Um...we don't think so.  Apparently the nice guy who got the contract is woefully out of touch with the true cost of doing those interviews.  We're guessing he bid the contract at least $20,000 too low.  We ish him and his company the best of success (and luck, too).  Actually, the more we studied the whole Dark Canyon gig, the more of a "stretch" it became.  Yes, it was doable but it was going to be a real grunt, too.  We had already decided we wouldn't do it for a gross of less than $2000.  We're very happy that chapter is closed and we can now move on with our original travel schedule.

Exactly what is our original travel schedule, anyway?  We're glad you asked.  The question gives us the opportunity to "think out loud" here and actually put the schedule to virtual paper.

We're driving down to Mesa April 6.  On April 7, Susun heads to San Diego for Gage's 3rd birthday while I head to Lafayette, Indiana, to spend time with my Mom.  We both return on April 12 and drive up north the same day.  We will be departing 2nd Chance Ranch no later than April 18.  Hopefully, we will be able to leave earlier than that. We will aim to arrive back in Idaho Falls no later than noon, May 1, the time and date of the Parks & Recreation Commission meeting I must attend to keep in good standing.

So, whazzup with all that time between April 18 and May 1?  Whacha gonna do?  We're glad you asked that.  Our first day will be a drive to Bluff, Utah. There's a real nice RV park there.  It's tidy and secure.  We will spend some time driving various back roads in far southern San Juan County.  Then, we'd work our way through Moab, Green River and Ferron, exploring back roads in Canyonlands and the San Rafael Swell.  Our biggest goal for taking the slow road north is to drive the 68-mile White Rim Trail in Canyonlands National Park.  We finally have the right Samurai rig to navigate that legendary route.  Hopefully, we will be out doing a back road adventure trip every day except for the last two or three days when we have to bolt fast and far north to make it to Idaho Falls in time for the May P&R meeting.  After leaving the Southern Utah's slickrock Disneyland, we'll be heading west on I-70 to Salida and then over to Scipio at I-15 and then north to home in River City.

Well, that's about all the chatter I can muster this morning.  Have a great day & Many Cheers!  jp
Posted by John Parsons at 7:15 AM

What a great trip plan!! How about goin' along? You can tie me down to that rig you've put on top of your 2nd spare!
Regards,
Dave E.