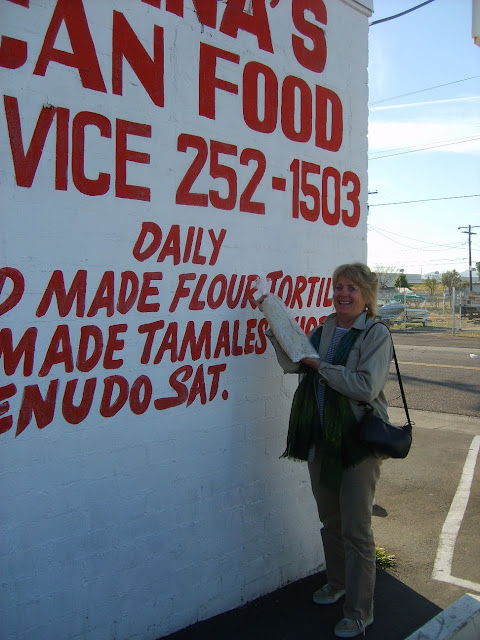 Susun's non-stop flight was due to land at Sky Harbor at precisely 8 am.  I was getting ready to slog through the peak of rush hour traffic and planned to leave at 7:30.  Lo and behold, my cell phone rang and it was Susun calling from Sky Harbor!  Her flight caught a righteous tail wind and came in 30 minutes early.  Imagine--flying from Hawaii straight to Phoenix in less time that it once took us to drive from Rimrock to Rocky Point! Incredible.

Anyway, she was in great spirits, as usual, and happy to be back with us cactus kickers.  So, I took off heading West and she's going like "Where ARE you going?"  By and by, we surfed ashore in Gang Land down at 12th and Mohave and it only took her a nano-second to realize we were going to have breakfast at the famed Carolina's.  WOW--that place is SOOO good.  Their breakfast burros are gigantic, gi-normous creatures for a mere $3.65.  I had chorizo and egg.  They are wrapped in a tortilla the size of a satellite dish.  Their house salsa is tremendous.  YUM.  We bought a dozen of their famous tortillas to treat Roger & Nancy. After yet another circuitous route back here we arrived shortly after 9 am and she is napping now.  Something called jet lag or something like that.

Yesterday was one of those typical days where you feel like you are walking in molasses.  Each step seems twice as difficult as it should be.  I didn't get everything ship shape and get on the interstate until 1:15 pm.  Got down to Fry's Electronics at 2:40 pm and rec'd the bad news from their service dept.  No can do on fixing the laptop "M" key.  Cain't be done.  They want $100 to swap out the keyboard.  Well, we ill use the little stub to strike our "M's."  At least I did pick up a nice car charger for my T-Mobile cell phone for $4.  The same charger in Cottonwood was $25.  Go figure.

It was a real traffic slog from the westside to the eastside that time of day--took nearly an hour.  I bought everything to treat Roger & Nancy to dinner but when I showed up, Roger announced he was grilling fillet mignon.  Oh, bummer.  Anyway, I set up my full outdoor kitchen and at least sauteed some mushrooms to go with Roger's steaks.  I used our digital thermometer to prevent Roger from grilling the life out of them and they turned out great.  We swapped a lot of stories, watched some golf on TV and hit the hay early.

I tried to get two wheels and tires off to a Zuki Guy from Surprise yesterday.  He knew some guy who was supposed to meet me at Fry's.  That didn't happen.  So, this morning, I posted up a note on the state's Zuki club Forum and now I've found three guys over here in the east valley who want to help get the wheels to the far west valley.  I'm sure it will resemble the Pony Express passing mailbags from horse to horse.  Anyway, it's gonna be fun to get this chain of events rolling today.

The NVUM guy has been real communicative and it looks like we're close to making a deal to do a bunch of interview sites at various Dark Canyon Wilderness Trailheads.  Dark Canyon is truly CAT MOAN Country.  No doubt about it.  It's back o' beyond The Bears Ears!

Well, not much else to report.  Many Cheers!  jp

Almost forgot--Here's the weekly stats for this blog. We cross over the 10,000 page view threshold this week.  And that's just since we started counting on June 19.  Daily visitor numbers seemed to have notched up somewhat in the last few weeks and time per visit appears higher as well.

Glad you made it safe. It's quiet and lonely here...It'll take me awhile to get used to it again. Thank you for such a wonder full fun visit!! Love you guys!!