We're picking Miss Susun up a little after 8 am tomorrow at Sky Harbor Airport.  She actually leaves Kauai today (about 11 pm Island Time) but arrives the next day.  The Big Question is whether to stay in Mesa or come up to 2nd Chance Ranch Friday and then drive back down on Sunday or Monday.  Don's funeral is Tuesday and Roger needs some help readying his house for all the people who will be there after the services Tuesday.

So, here we go "thinking out loud" again. (NOTE: This is also for Susun's benefit when she reads it later this morning.)

A cursory glance at the situation would say, "Go north and then come back."  However, it's becoming quite complicated.  First, let's take a look at the Flagstaff  NWS Discussion from 3:50 am this morning:

STORM TOTAL WATER CONTENT (QPF) CAME  OUT AROUND 0.6 TO 0.75 INCHES OF LIQUID WHICH YIELDS STORM TOTAL  SNOWFALL AMOUNTS OF AROUND 8 INCHES BETWEEN 6000 TO 7000 FEET AND  FROM 7000 FEET AND HIGHER A RANGE FROM 8 INCHES TO 18 INCHES. SNOW  LEVELS ARE FORECAST TO START OUT AROUND 5000 FEET IN WESTERN  SECTIONS OF THE STATE TO 6500 FEET OVER THE WHITE MTNS....THEN  FALLING TO AROUND 2000 TO 3000 FEET BY SUNDAY MORNING WHEN THE  COLDEST AIR MOVES OVER THE STATE. A VERY COLD MORNING IS EXPECTED  MONDAY MORNING.

The storm is progged to begin Saturday and lift out Monday. As we all know, a forecast like this turns I-17 into a Maniacal Bumper Car Course so Sunday travel looks to be out of the question with snow levels that low.  Meanwhile, a storm such as this one pretty well confines us to our quarters here.  It's cold and wet.  No blissful campfires each evening!  And, meanwhile, we face a dicey drive on Monday as well.

At this point, I'm voting for staying in Mesa.  The weather will be perfect for Susun and me--temps in the mid to low 60's.  Everyone down there despises such low temps but we love 'em.  The air should be clear and there will be lotsa stuff we can do.  I know Susun's antsy to get home after such a long time on Kauai but this plan is a whole lot more prudent, economical and SAFE than an attempt to get up and back in such a short time frame with such dubious conditions.  Okie, dokie, Smokey?

Yesterday was much more low key than the Too Much Tuesday.  However, it was unique in that we had an NVUM Deja Vu.  Say what?  As most all LRB's know, NVUM seems to have an uncanny knack for popping up to play special roles in our life.  Heck, we're in our 9th year of messing with NVUM in one form or another.  Here's how this episode has played out so far.

Once in awhile when I am really bored, I go to a website called "fbo dot gov."  It generally lists about 20000+ federal business opportunities that potential contractors can bid on.  It's always a fun read. For example, that's where I learned of bids being sought to build the ultimate 10,000 sq. ft. Taj Mahal River Runner warehouse at Grand Canyon's South Rim.  There's always something amusing on that list.  Well, lo and behold, way back in January I stumbled on the bid solicitation for the NVUM process on Utah's Manti-LaSal National Forest. (Think the Monticello-Moab and Wasatch Plateau areas.)  Well, it almost goes without saying that these are two of our favorite areas.  Also, we "Secret Shopped" those Forests in the fall of 2005. So, our antenna perked up and we began watching for the bid award.  Bidding closed January 25th.  Oddly, there was no award issued right away.  Last year, the Sawtooth contract was awarded with a few days after the close of bidding.

Time dragged on.   And on.  I even called the Contracting Officer and asked "whazzup?"  She gave me a very vague answer and said she thought the award should be out by Valentine's Day.  Nope.  Time continued to drag on.  Susun and I speculated that it was because they wanted to give it to somebody besides RJ's outfit and they needed time to make their award bombproof in case RJ appealed.  But who knows why it took so long?  Well, in another footnote to the uniqueness of 2-2-2 on The Tuesday Too Much Day, the gubmint decided to up and award the Manti-LaSal contract February 22nd.  An outfit called Sims and Associates got it.  (Click here to read the award notice.) They are a group of well-educated, highly skilled professionals who do a wide range of mostly what's called environmental and compliance stuff.  You can click here to check them out.

We had already decided we wouldn't remotely consider working with RJ again.  But we both said that if somebody interesting got the contract we'd sure consider it.  Heck, if we like 'em, we might even do more than a few token interviews--assuming, of course, that they like us.  So, after reading up on their company and the key guy's background, I winged 'em out a phone call and got an immediate response.  After dealing with someone who's idea of a reply might be two weeks after a call or email, I was pleasantly shocked.  The guy sounded very cordial and friendly so that was encouraging.  Now it's time to bury my nose in the spreadsheet of the interview dates and see if we can make something happen.  It sure would be fun to take the Slow Road north this spring, ambling along up through Tuba City, Kayenta, Mexican Hat, Bluff, Monticello, Moab, Green River, Ferron, Price and Spanish Fork.  Who knows, we might even go over the San Raphel Swell and then turn north up through Manti to Nephi before going mano-y-mano with the I-15 Salt Lake corridor craziness.  Or, heck, maybe we would blow that off and take Highway 89 up to the turnoff to Provo Canyon and then go through Heber City, Kamas and up to Evanston, Wyoming.  Then we could slip into Idaho Falls through the backdoor via Star Valley, Alpine and Palisades Reservoir.  That would be sweet.

Now that we have The Skamper, we're all set for such an enduro meander-merriment.

Meanwhile, The Goatherder stopped by yesterday to show off his new Coleman stove and saucer. GH bought the stove for Josh's graduation summer road trip into Colorado.  Meanwhile, GH stumbled into The Fabled Missing Saucer.  Hopefully, he will write it up on his own blog so I don't have to.  Speaking of blogs, DF & LBR Wayne R. penned a real classic blog post yesterday.  His posts just seem to be getting better and better but this one is over the top---quite literally, in fact.  Click here to read about Wayne 55-mile Grand Canyon backpack into a place on one ever goes.


Houn Dawg pulled another fast one on me late yesterday and actually convinced me I needed to drive to Cottonwood late in the day.  HD is SUCH a con man.  I've got to keep a better watch out on him.

We rustled up a fine foto fire once again but no one came to visit.  The sunset was medium decent--nothing particularly spectacular but still OK.  The campfire was a whole more photogenic than the sunset so it is below.  Today is all about house cleaning and then we'll boogie outta here hopefully in time to get down to Fry's Electronics by 1-2 pm.  I need to roam around that store and commune with circuit boards for awhile.  I also want a much better hot rod digital voice recorder and I want to fix the freaking "M" on this laptop--the little stub is wearing a hole in my finger.

Have a Great Day & Many Cheers!  jp 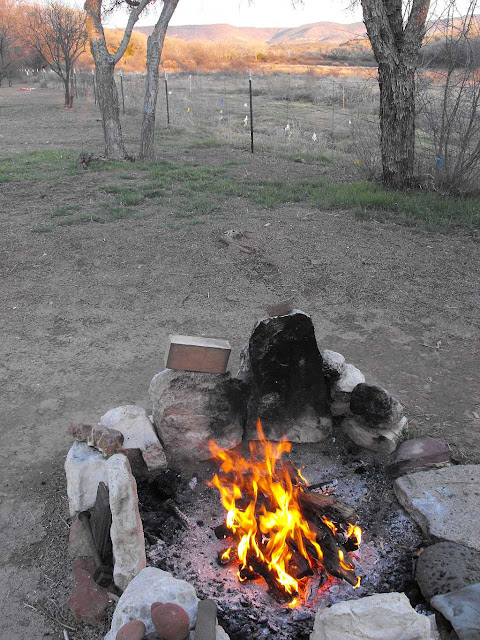 You've got to be kidding me! What with the weather situation that is developing, the many Mexican eateries that exist in the valley, the warmer temps there, the help you can give to Susun's family.

I hope the blog posting helped you come to your senses and decide to STAY in the Valley.

Thank You, Wayne. You are quite right. Plus, the way that you phrased it here puts it all into focus. Thanks for your friendly nudge!

I was amazed at Wayne's tale! What a great trip!
I tried to leave a comment on his blog. Hope it got through.
Dave E.

los dos Molinos
S. Central almost to the mountain
long wait, worth it