The Paddle That Stayed Up The Creek

As anyone who runs rivers knows, mistakes happen.  Actually, there's another word for it that can't be used here on this G-rated family blog.  Most river runners will readily admit they make mistakes, although some resort to blaming the river for causing their mistakes.  It's not fair to blame the river for your mistakes.  It's important to point the finger at yourself and say, "I messed up."  That's the way it should be done according to Roberts Rules of The River Order.

OK, well, I messed up Tuesday.  I lost track of a very important, vital element of a successful canoe trip: the spare paddle.  Opps.  We launched at 11:20 and along about 12:45 we decided to sit in the boat out in the middle of the river below I-17 and eat some snacks and tell some stories.  Lo and behold, I looked down and there was no spare paddle.  It had vanished without a trace or a clue!  I just about upchucked my turkey sausage.  Sheepishly, I kind of looked skyward and up and down and around as I turned a full 360, hoping perhaps the paddle had merely taken its own lunch break and might come skittering back down to earth to rejoin our little trip.  Nope, no such miracle happened.

We remained without a spare paddle.  That sinking feeling of being a clueless nitwit began to creep in on me.  It's one thing to lose a paddle the right and proper way while clawing your way through some bodacious chunk of whitewater.  It's quite another thing to realize you lost something and have absolutely no idea where it might have gone.

Josh, of course, is just getting a brief introduction to River Rules and so the impact of this embarrassing event were largely lost on him.  He wondered how much a new one would cost.  I guessed $50 but it's not the money that's "the thing" here.  One simply doesn't lose paddles while on the river.  It's a huge and major faux paus of the highest order.  Perhaps the only thing worse would be losing your lifejacket without knowing how you lost it.  Or perhaps your boat.  Unfortunately, there's no hole to crawl into and hide on the river so we continued our trip.  The Goatherder (Dad of Josh) ran our shuttle and he was as perplexed as us when he learned the news.  You see, in a past life, GH used to run the equivalent of large commercial trips up on the San Juan in Utah.  So GH knows about spare paddles and oars and such.  Ironically, GH had closely watched us rig the canoe at the put-in and said positive things about our rigging.  The spare paddle had been securely wedged into the very tip of the canoe's stern.  It's not like it could sprout legs and suddenly flee the boat.

As soon as we parted ways at Wendy's, I sped home, changed clothes and jumped in SuziQ.  I knew of one place the paddle might have been left behind.  It might have been near a riffle we portaged at the top of the long gravel bar above the interstate bridge.  Luckily, there's a way to four wheel all the way to the top of that gravel bar.  It was actually kind of fun driving through the water of the river's side channels.  After bouncing upstream through rivulets and big cobbles, I was able to reach the riffle in question.  I scurried up and down the river bank looking for any sign of the paddle.  Nope.  No luck.  Some beer drinking Bubba was nearby and I interrupted his reverie to ask if he had seen a bright yellow paddle.  He looked mighty perplexed and you could tell he was almost ready to spring some crude "up the creek, huh?" kinda comment.  Fortunately, he abstained from making fun of me and between swigs of Bud Lite said, "Nah, I ain't seen no paddle."

So, I put my tail between my legs and ambled back across the gravel bar and drove home in a funk.  The whole situation was clearly and completely MY responsibility.  I could not rest until I had exhausted ALL alternatives and options for finding the paddle.  Wednesday I began thinking the paddle might have decided to stay upstream at our portage of the Verde Ditch diversion dam.  So, I hatched a hair-brain plan to some wade across the river and then bushwhack a half mile downstream to attempt to find the paddle.  I assembled everything I thought I needed to ford the river at Newton Lane and drove back down there.  I took one look at the ugly, jagged concrete of the Newton Lane diversion dam and dropped that idea on the spot.  No way would I risk life and limb for a mere paddle.

So it was back to the drawing boards as another day passed in the (so far) fruitless search for the wayward paddle.  I mulled all my options, even broaching the unthinkable: a frank admission that I lost the paddle and would receive a lifelong sentence to river runner purgatory.  Since it was actually Arizona State property, I knew that I would be needled relentlessly for the rest of my life by State Parks Staff.  I simply couldn't bear to even imagine how utterly painful that scenario would be so I forged on and made a new plan.

This time I took the canoe back to Newton Lane Thursday morning.  Now, mind you, this is one of the most difficult river access points on the entire 30+ mile stretch through the valley.  The access road is rutted and there's a steep, loose gravel hill that drops sharply down to a bench near the river.  There's yet another steep, slippery drop to the river bank.  Dragging a boat DOWN these steep slopes is no problem.  Dragging a boat UP them is quite another matter.  It's a daunting task even for two people and it's double dog daunting for a Senior Citizen with an achy back and dubious knees.

Oh, well, as GH is fond of saying, "If you're in it for a dime, you're in it for a dollar."  It didn't help matter that my cell phone rang just as I was getting ready to turn down the narrow dirt two-track to the river.  It was Susun breaking the news to me of Don's passing.

So, I rolled the dice and put it on the line and drove down the rocky slope to the last bench, huffed the canoe off the truck, slid it downhill into the river and jumped in and took off.  Solo canoe paddling is actually a lot of fun, if one is doing it for fun.  However, when one is simply trying to get from Point A to Point B in the shortest possible time, solo canoe paddling can be "less fun," shall we say.  As I rounded one bend, two river otter stretched their necks high out of the water to peer at me.  That certainly lightened my mood and brightened my day!

As I paddled toward the ugly diversion dam, I kept wondering WTH I would do if the paddle wasn't there.  Imagine my delight when I spotted the paddle.  I felt almost like Little Ralphie getting his Red Ryder BB gun for Christmas.  If I could have leaped for joy there in the canoe, I would have done so.  Luckily, the paddle was close enough to the water that I could reach out from the canoe and grab it.  I didn't even have to get out.  HA!  I threw the paddle back in the canoe and said, "STAY" and took off back upstream.  There actually is some fairly substantial current in this location so it took awhile to get back to Newton Lane.  And it took a lot longer to drag the boat back uphill to the truck and wrassle it up on top of the truck.  It's always real "iffy" whether a two-wheel-drive truck will make it back up the loose gravel cobbles of the Newton Lane hill.  I figured luck and paddle karma were on my side yesterday and gunned my way back to the top.  Whew.  I was so excited to have the paddle back, I even stopped a short distant away to double check the back of the truck to make totally certain sure that it was really sitting there.  Yep, it was.  I toodled home happy as a river clam and the rest of the day sailed along smoothly.

I suppose the real question here is this: Would I have told this story if I had not found the paddle?  Um...probably not.  A Happy Ending sure changes things.  I tell this story today as a form of penance for my egregious mistake Tuesday.  A Trip Leader should never lose any gear, let alone a paddle.  This story is my way of making amends for my mistake and will serve as a constant reminder to do a double beach check at every point of contact with land whether it's a put-in, a take-out, a lunch stop, a scout, a lining route or a portage.  We will never again assume that all our stuff is back in the boat until we double check it each and every time we are out of the boat for any reason.

Now I will go say my ten "Hail Mary's" and sit in the corner with my dunce hat on. 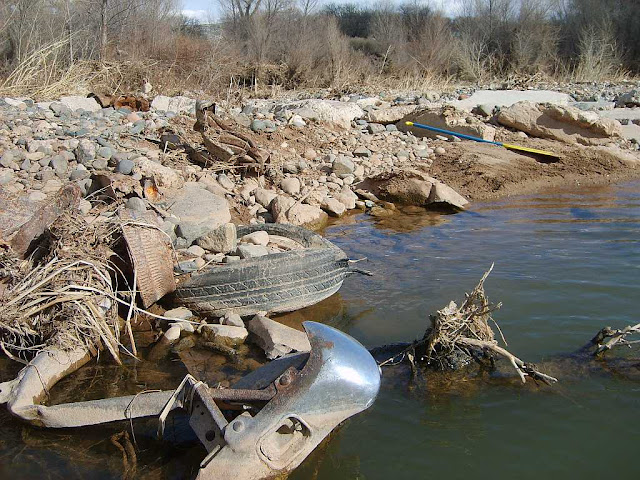 This brings back a great tail of a river ranger over on the Salt river. He was droped off at the end of a very long dirt road at Horse shoe bend. as the truck was long gone he had not even packed a paddle! He had all the honker gear,food water pfd air pump but no papple. So he starts to look through drift wood hoping to find anything that would work. after half the day he found a board and he used his swiss army knife very slowley saw it in to the shape needed. thus the 2nd half of the day. he put in and started around the first bend and it broke into splinters. well he camped a 1/4 mile from the put in. he ended up using a long stick like a pole and did make it to the take out in 2 days. his pride some what broken,He seems to be doing great now,running the whole river ranger show down on the salt.
Deano

You shoulda bought a lottery ticket yesterday. When the river gods deign to give back lost gear, you are truly blessed.