The beat goes on

Here's a slideshow of 165 of Susun's photos from Hawaii.  I will make a better presentation of them tomorrow.  But for your stalwart readers, click here to access all those photos.
'Twas a busy Saturday.  Writing up the "Fun Friday" blog post took quite some time.  Just as I finished writing it, I realized I had to boogie to Goodwill for their half-price sale.  I waited in line with a lot of Latinos and figgered none of them would be heading off to snag one dollar golf clubs.  So, I had this selection of clubs all to myself.  I tried to tell the lady checker what the price should be but she begged to differ. 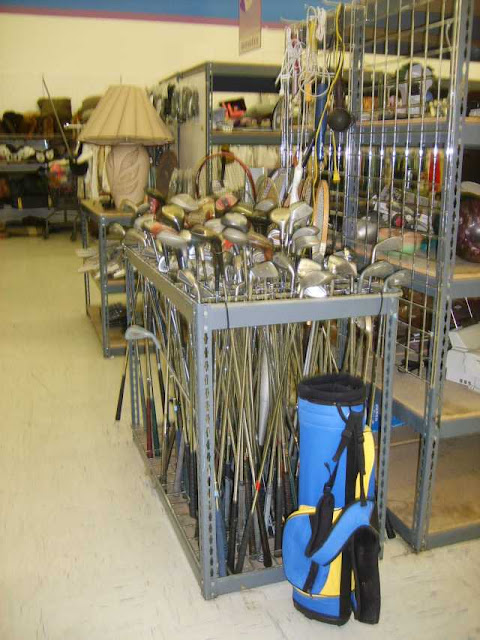 That meant I got 15 clubs and this PING bag for a mere $17.86 instead of the $20 it should have been.  Apparently, she just got tired of ringing up all those clubs and finally gave up after entering 13 instead of 15.  The clubs were supposed to be a buck each and the bag was $5.  It's a real nice assortment with several duplicate clubs and a real nice putter. 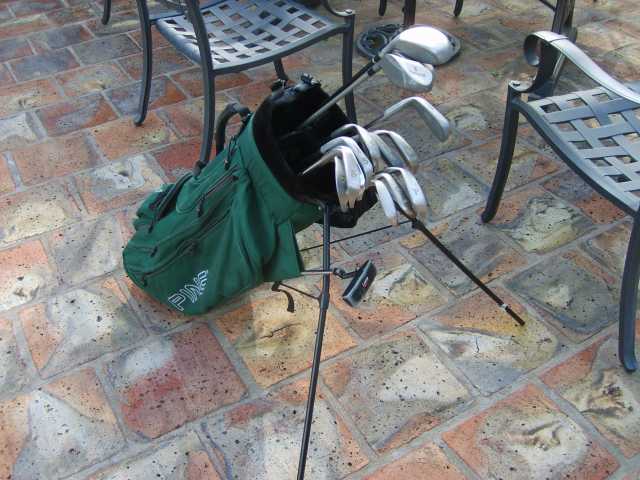 After buying the clubs, I plotted out a wide-ranging day that started out at the most tricked-out Barnes & Noble I've ever seen.  This place looks like a palace for a petty potentate in some Gulf State dictatorship.  It was in a real swanky mall that had a ba-zillion palm trees.  The B&N was filled with your typical suburbanite book buyers--very trendy people.  My tattered jeans and ratty t-shirt provided a welcome contrast for all those upscale people.  I actually paid $43 for a book there so the spendy atmosphere must have been contagious.  Maybe it was all the swaying palms. 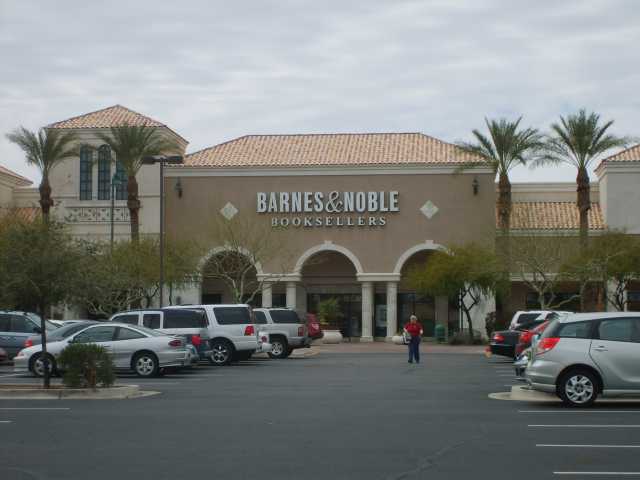 After leaving B&N, I made the first of two trips to my Temple: Harbor Freight.  I bought an 18-inch breaking bar and an impact screwdriver. Then it was off to Fry's Electronics over on the Far West edge of Tempe.  The place was packed with people buying all sorts of big screen gee-gaws and droidy, dweeby baubles.  I picked up two "personal sound amplifiers."  More on them later. 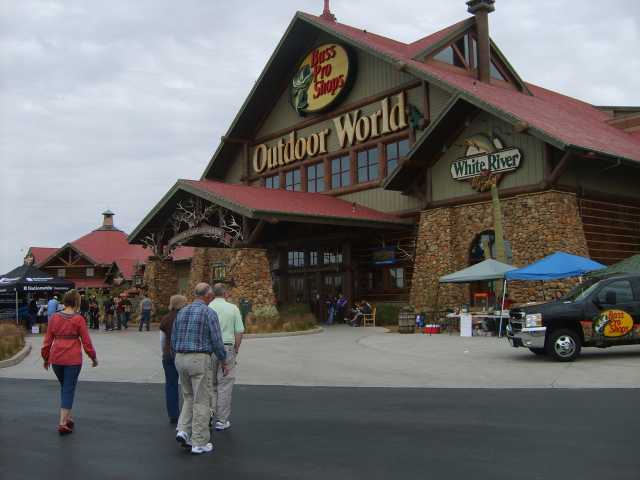 Then it was off to one of this Nation's premier outdoor shops.  Cabela's is probably the best known outdoor mega-store but Good Ol' Boy Bass Pro Shops comes in a close second.  I picked up a nice pair of electronic ear protectors (for the Tuesday Target Shoot) for $30.  These electronic ear muffs can sell for as high as $200. 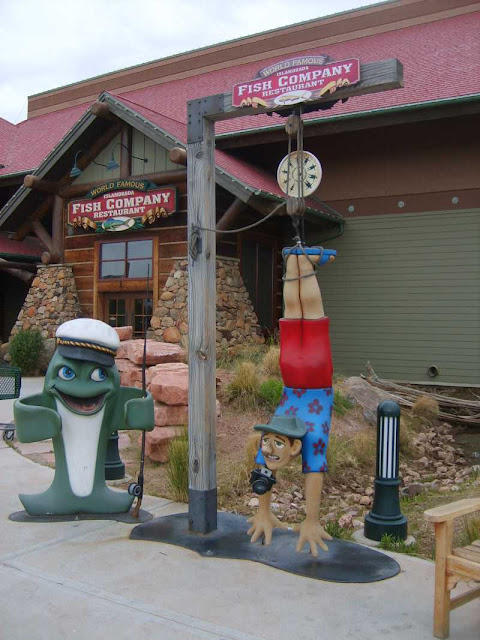 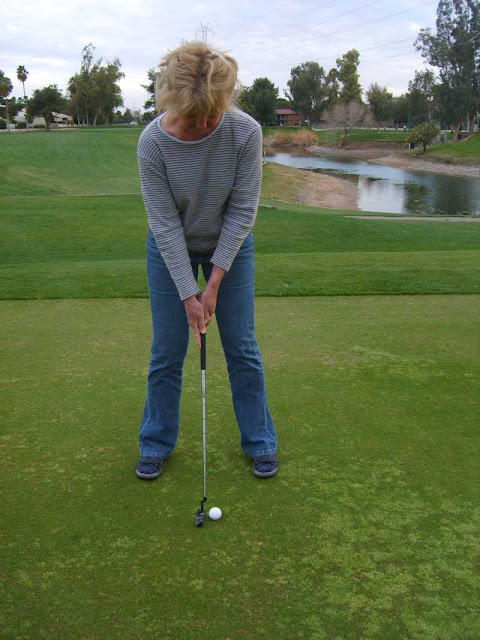 Susun spent her day helping Roger clean up the house in preparation for Tuesday's services.  THANKS, SUSUN! After her long afternoon nap, we went back over to Harbor Freight, made yet another visit to Goodwill and then hit the putting green at Royal Palms.  I found Susun a Junior's RH putter.  It's a wee bit too small for her but I can easily see a good putter design is really going to help her game.  We putted around until sunset and then enjoyed a quiet Happy Hour.  Roger, Nancy and Arlyn were all gone.  I spent the evening checking out my new $43 book and my personal sound amplifier.

What are those amplifiers all about?  Well, as almost everyone knows, I cain't hear hardly at all and I have been loathe to spend $2000-$3000 or more for a pair of hearing aids.  That's akin to stuffing a Zuki in my ears.  I'd rather spend the money on another Zuki than I would on two ounces of technology.  I've had this feeling that, sooner or later, somebody would figger out that they could turn the "bluetooth" device design into a hearing aid.  Voila, somebody figgered it out.  For many, many decades, Old Folks have had this stigma about the visibility of hearing aids.  It was so totally UNCOOL to see a big old hearing aid stuffed behind somebody's ear.  Oh, the embarrassment of it all.  So, the Hearing Aid Industry (Yes, Virginia, it IS a genuine industry) has always focused on making hearing aids smaller and smaller and more and more invisible.  Meanwhile, the cost of this miniaturization has caused hearing aid prices to skyrocket into the stratosphere.  I personally know someone who spent SIX THOUSAND DOLLARS on a pair of hearing aids!!!!!!  Heck, for that money, we would buy THREE Suzuki Samurais--or at least one really trick rock crawler. 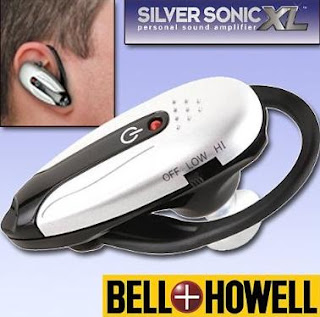 Well, meanwhile, the advent of Bluetooth technology totally reversed the "thingie on ear" mentality.  Now, it's considered hip and stylish to be seen waltzing around in public with a big ol' silver thingie clipped to your ear.  BAM--it didn't take long for somebody to realize they could stuff small sound amplifers into something that large.  The Hearing Aid Industry, of course with its Enforcer The FDA, realized the impact of possible competition and quickly stomped all over those entrepreneurs. These devices must be marketed as "personal sound amplifiers" for people with NORMAL hearing.  They must also contain a disclaimer on the package that they can't be used by the hearing impaired (AKA: Me) and that the hearing impaired MUST continue to deal with the scammers from the Hearing Aid Industry.  Well, HA! HA! HA!  I figgered this scam out and when Fry's just now began selling a really trick Bell & Howell "personal sound amplifier" I jumped all over it yesterday.  The cost?  TWENTY BUCKS!  No kidding.  And it works like a champ.  Now I will finally be able to hear normal conversation at a dinner table, meeting or party.  It's so cool, I can hardly stand it.  It even has a rechargeable battery so I will never have to pay the scammers for their hearing aid batteries.  It just TOTALLY ROX!  And, guess what?  I saved enough money to go buy another Suzuki Samurai.  YEEEE----HAAAW!