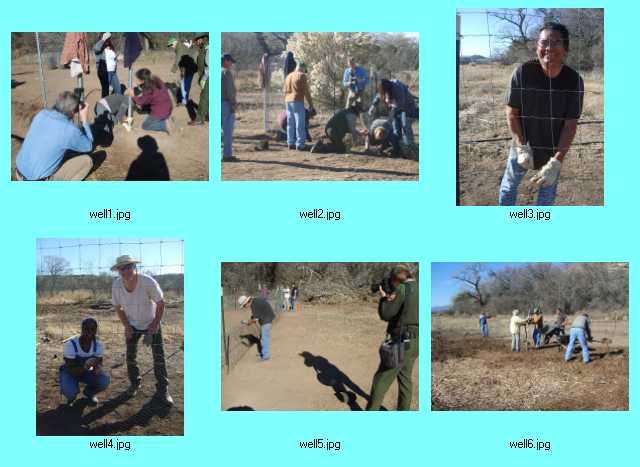 Yikes, It's ALIVE!  The photos above were taken by a digital camera that arose from the dead.  YES!  This is the same camera that was hosed by gasoline and then lay soaked in a pool of gas.  When I picked up the poor camera, gas just sheeted out of the thing.  Naturally, it wouldn't work.  It was given up for dead and cast off like a an old broken pot shard.  I did, however, put it out in the Sunday sun for one final airing before disposal.

Yesterday, prior to leaving for the MLK Day gig at Montezuma Well, my intuition begged me to give the Old Beater Gas Bag camera one final "Last Respects" try.  Imagine our surprise when it sprung back to life as if nothing had ever happened.  Well, not quite.  The LCD display looks real funny--kind of like a cheap kaleidoscope. But it takes pictures and that's all that matter to us.  Who cares if they look funny on the display?  The poor camera still stunk badly of gasoline so we rubbed it down with something called Odo-Ban, industrial strength de-odorizer normally used in outhouses and other foul places.  Voila, the Odo-Ban worked its magic and the camera smelled as sweet as a fresh bloomed flower.  Imagine that.  We were quite sad about losing this trusty, workhorse camera.  It had become like an Old Dear Friend, tried and true and loyal, through and through.  Now, the sadness has lifted and The Camera LIVES!  How sweet is that?  Very sweet.

I spent almost 4 hours over at The Well working on the TUG (AKA: Traditional Use Garden).  It was strenuous work and everyone there really pitched in to tackle some daunting dirty work.  I was sore and plumb worn out after returning home for some afternoon chores.  Basically, it was a day of old-fashioned grunt work quite literally "in the trenches."  I met some real nice folks, including Famous Reporter Steve Ayers (blue shirt).  He's a cool guy and we look forward to seeing him more often.  I also met a new neighbor, Gerry Q.  He's in the thumb at top right.  You can see his work here.  Gerry was easily the hardest worker at the event.  His energy and happy, positive attitude were contagious. He knows Kate W. and her Dad, Bob L.

We got to spend some real quality time working side-by-side with Ranger Rex and finally got to meet the head of Friends of Montezuma Well, too.  The new TUG is going to be a MUCH better garden than its previous incarnation.  It's also going to be a much easier and far more pleasant walk from The Straw House to the garden.  Once again, we enjoyed a real nice campfire in the balmy springlike evening air.  Life is good!

Many Cheers, jp
Posted by John Parsons at 8:57 AM