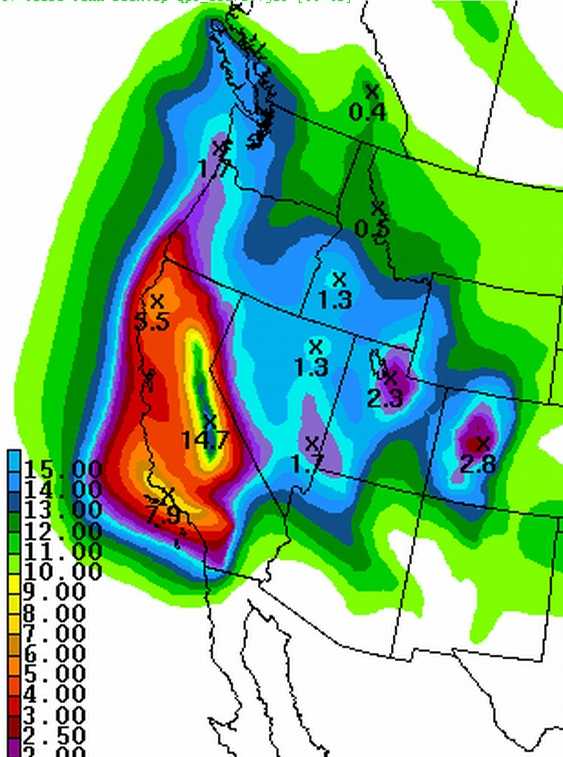 Yea, verily, it hath been raining righteously upon The Plain--copiously and mostly without let up.  We have well over an inch with more pitter patter on the way today and tomorrow.  The temps have remained continuously in the 40's and are likely to stay pegged there possibly for another 48 hours.

Meanwhile, our cool, wet news is not really news.  Take a look at California's 5-day QPF above.  WOW!
(QPF=Quantitative Precipitation Forecast)  There are some eye-popping numbers in the graphic shown here.  If the computer models are correct, the Sierra Crest could be looking at upwards of TWELVE FEET of snow!  Meanwhile, those fire-ravaged SOCAL hills could easily get enough water to break loose another round of Headline News mudslides.  Generally speaking the NWS folks who do the QPF's are a pretty accurate group of forecasters.  They usually aren't off by much.  Let's put it this way, even if they are off by 100%, it's still going to be one hum-dinger five day period coming up.

We don't talk politics here as everyone well knows.  It's strictly forbidden.  However, we must admit that it was great to wake up this morning and see that the tax cuts have been extended for another couple of years.  Since we're fixed income seniors now, our budget is pretty piano wire tight and the prospect of having to pay a lot more federal tax was a great concern.  So, without making a political comment, we're thankful to whomever wishes to take responsibility for this welcome news--it certainly will  make Years 2011-2012 a lot more "liveable." (We can exhale now.)

Dear Friends & Neighbors Gary & Robin (or should that be Robin and Lizard?) came for dinner last night. We appreciate their company so very much!

Susun went off visiting some of her Sedona friends.  I staid home and spent a lot of time researching the historic photos of the National Archives (NARA).  The NARA folks are having what's called an "Augmented Reality Photo Contest."  Even though I figure my own reality is pretty well augmented, especially during Happy Hour, I am intrigued enough to want to play by the rules and try to put together a credible entry into this contest.  You can click here to read all about the Augmented Reality gig.  (NOTE: The way they explain it is pretty esoteric so be sure to check the Flickr album to see examples of how it works.)  I must have looked at perhaps 1,500 photos, maybe closer to 2,000.  It was a perfect Rainy Day activity.  Below are my five candidates to use in Augmenting Reality.  Brief notes appear below each photo. 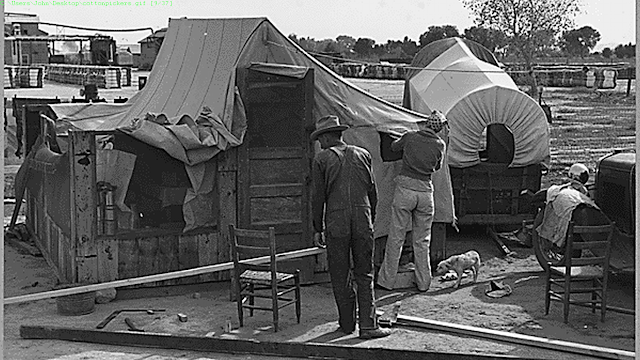 NARA titled this one "Cotton Pickers Improving Their Home."  The NARA archives had scores of photos taken of Arizona cotton pickers during the Depression.  The photos were haunting and very sad.  This one is so bleak it tugs at my heartstrings.  The picture was taken in an area that's a seemingly unending sea of red tile roofs stretching to the distant horizon in a nameless, faceless region of sprawling suburban subdivisions south of Phoenix.  I would like to hold this photo up with those ticky tacky houses spread out in the background. (You can get a really LARGE version of this photo by clicking on the one above.)

This is a true Photo for The Ages. It's really just about as good as it gets.  Numerous LBRs will instantly recognize this photo.  For all other LBRs, here's the story.  None other than Major John Wesley Powell sat in that flimsy chair.  That's how the fearless. one-armed hero of Colorado River runners actually ran both of his epic trips through Grand Canyon: in a ten cent kitchen chair!  If only I could teleport myself down to that very spot and hold this photo up against today's timeless background in the bottom of The Big Ditch. (Note: John K. Hillers took this famous picture during the 1871-72 second expedition.)

Ladies & Gentlemen, Welcome to Flagstaff!  This wonderful photo was taken in perhaps 1881-1882 when the photographer perched himself on an Atlantic & Pacific Railroad water tower looking north into what is now thoroughly urban and perhaps even sophisticated Flagstaff.  I'm guessing this would be located about where today's intersection of Old Route 66 and Leroux Street is located but it cold be a block farther east.
What a hoot it would be to use this photo in the contest! 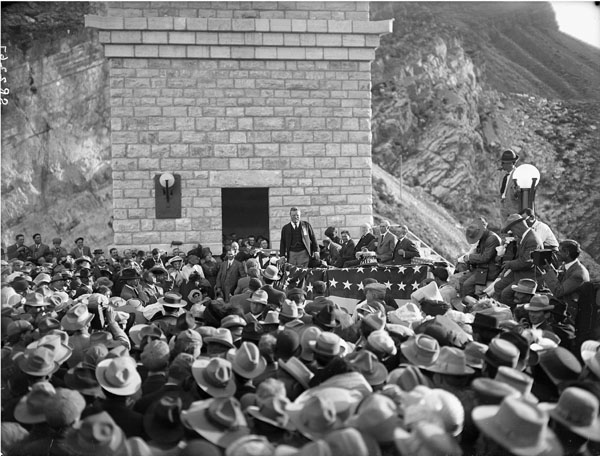 Speaking of hoots--this one would be a huge hoot, too.  That's Col. Theodore Roosevelt (Teddy) standing atop Roosevelt Dam prior to his dedication speech in 1911.  By 1911, Teddy was a true grit hero to every Arizonan of the male persuasion.  He had their undying love and devotion for his role in organizing the Rough Riders and many other legendary exploits.  The dam has undergone significant changes since then but with the help of Salt River Project, I'm sure we could interpolate the long-lats of where the photog stood and it would be Total Hoot to augment some reality at this specific location!

No, this is NOT the Three Stooges in high school automotive class.  This is a WPA class helping young guys learn auto mechanics back in the Depression.  (WPA= Works Progress Administration).  I absolutely LOVE this photo.  It would be so fun to take it to the highest tech High Tech automotive technology repair shop and augment some reality with a background of computers, wires and NOTHING that remotely resembles an actual engine!  Meanwhile, everyone would be in spotless coveralls and uniforms and carrying bar code scanners and using smartphones to talk to their Tech Support Specialists.  AH, The Good Ol' Daze!

Cheers, jp
Posted by John Parsons at 7:37 AM