"What's it's name" is here again

Maybe we should spell Monday out loud to the tune of the Mickey Mouse Theme Song.  M-O-N-D-A-Y...You get the picture.

This Monday promises some serious fun and games.  Since it's the first Monday of November, it's time once again for the monthly Parks & Recreation Commission meeting at High Noon over on yonder Skyline at the OK Activity Center Corral.

After today we will know one thing for sure.....whether we will still actually be ON the Commission or not.  As you know, we're soon heading down to OAZ. (Acronym Alert!  See Glossary.) That means we will miss at least 5 P&R Commission meetings.  A couple of weeks ago, I asked The Big Man Dave for an official item on the November Agenda so the Commission could discuss whether they want me to remain as a member or resign.  Well, naturally, this opened the proverbial can of worms.  It's becoming quite the story and we won't go into all the gory details here as doing so would broach on politics and, as you know, we're loathe to have anything remotely political on this blog.  Suffice to say that it's going to be a quite interesting meeting.

This morning has been real busy.  We spent a long time posting up various email, blog and Twitter stuff relating to Harry''s Hideaway restaurant in Cornville.  That's a long story, too, but you can read about "Why We Promote Harry's Hideaway" on the Snowbirds blog.

We had a really fun thing happen with our Snowbirds Twitter account this morning.  Twitter's computers automatically suggest other accounts you may wish to follow.  Most of the time, such suggestions are "right on."  So we shuffled over to a suggested twitter called "thetraveltweet" and became intrigued.  Then we visited the author's blog and found an interesting idea to send postcards to ourselves.  Sounds goofy but, trust me, it could be a lot of fun in the right hands.  So, one thing led to another and, lo and behold, we got retweeted for our Montezuma Well post on this person's Twitter account!  Considering she has over 3,200 followers, that's a Big Deal for us.  You can visit her Twitter by clicking here.

Terry M. gave us a book to read the other day and today's the day we have to give it back.  Luckily, yesterday was blustery and almost cold so we read the book instead of doing stuff outside.  It's entitled "Indian Creek Chronicles," by Pete Fromm.  You can click here to read the various Amazon reviews about it.  Overall, I agree with someone who rated it a "3" and used the word "mundane" in his review.  But it was a good Sunday read and that's what really counts.  It's great to have a fast book you can gobble down in a single day.  Thanks, Terry!

Another item of Big News-The Lost Lost Straw Bale House Photo Album is ALIVE!  Both of us would be lost with the pictures of the building of our straw bale house.  The album disappeared in May and wasn't discovered again until yesterday. It was cause for much celebration.  Whew!  Hopefully, we'll be able to scan in all those priceless pix before we depart to OAZ so they can be preserved without any future angst. 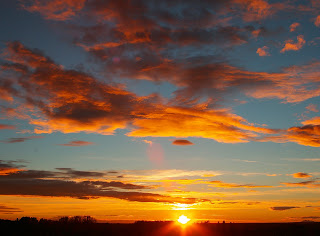 Ye Ol' Sidekick hasn't sold--nobody's biting on my "smelly, noisy, ugly" ad.  Dang.  So, instead of giving the poor thing away, we're going to put it to bed in its own custom built Okie-style lean-to alongside the cook shack.  We spent a goodly part of the day designing a cheapo arrangement using old 2x4 remnants and a single sheet of flimsy OSB.  It should rank right up there with some of our Best Hillbilly Designs.

Goatherder got some good wine news yesterday.  You can read about it on his blog by clicking here.  CONGRATS, GH!

Roger delivered yet another stunning sunset as seen on Halloween Night from his perch high above the Snake River Plain.  It's so fun to wake up and check out Roger's blog.  Last night Susun was saying, "WOW, the light is SOOO awesome outside right now."  Well, from the looks of Roger's fabulous foto, Susun sure got that right!  Thanks, Roger. (Click here for Roger's Sunset Blog.)

Well, there's not a heck of a lot happening 'round these parts, as you can easily tell.  So, we're signing off once again this morning by wishing you MANY CHEERS!  jp
Posted by John Parsons at 10:10 AM