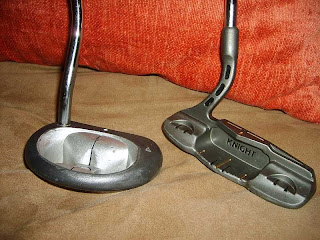 We went off on a golf tangent yesterday.  First, we headed to the T-stores looking for a container to help measure and pour precisely 18 ounces of motor oil.  Well, you know what happens when we go to the t-stores.  Sure enough, as we were passing by the golf club bin at Dee-Eye, a whole bunch of fancy putters leaped into view.  All-in-all, someone had donated seven high dollar putters, the kind that routinely sell used for upwards of $25 a pop on eBay.  Never the laddie to pass up a deal, I placed all the putters side-by-side on a nearby desktop and picked out the two best for Miss Susun--total cost: $4 for both.

Naturally, we hustled home putters in hand and broke Miss Susun away from her chores.  She was intent on doing the final "tidy up" of the courtyard and other outdoor environs. I swept her away to the Pinecrest putting green where we spent a fun 45 minutes "puttin' around."  Each of the new putters really elevated Susun's putting game.  She immediately started getting 30-40 foot putts close enough to the hole to drop the ball in on the second putt.  She actually dropped some 15-20 footers!  Man, you should have seen her smile.  Pretty soon, she looks at the little green and realizes there are six numbered flags and she decides we should have a Match Game.  So, we started at Hole #1 and kept score through the six practice holes.  Believe it or not, we finished tied at the end and I had to struggle to achieve even a tie.  WOW!  Susun was positively jazzed about her turnaround.  It always amazes me what a difference it makes to have the proper tool for the task at hand.
Susun now wants to go back to Pinecrest as often as possible before we leave for Arizona.  She even suggested figuring a way to strap the putters to our bicycles.  It only takes 5 minutes to drive there so it might be a 10-15 minute bike ride.

Pinecrest is cool.  It was built in 1936 and has one of those old rock and timber clubhouse buildings so common in the Post-Depression Era. (Click here for it's city webpage.)  It's rated the top municipal course in Idaho and its in the mid-rankings of the top 100 munis in the Nation.  It sure has lots more ambiance than Sand Creek.

However, moving right along to Sand Creek,  I met Houn' Dawg at 2:30 for another round on the short course.  As we were walking out to the tee, HD spied one of his friends on the regular course.  They started chatting and when HD told his friend he was going to play the short course, the guy started doing a belly laugh.  I quickly saved the day for HD by telling the old gas bag that HD was my Mentor and since I hadn't played golf in 45 years, I needed a coach and HD had condescended to help sprinkle some holy water on my swing.  That seemed to appease the old duffer's sensibilities and off we went unscathed by the slings and drivers of outrageous sarcasm and ridicule.

It was a great day for golfing in shirtsleeves.  The temp pushed 60 and there was only a light breeze.  Yellow cottonwood leaves fluttered through the crisp air and the views of the foothills and the sand dunes were outstanding.  Sand Creek is actually built on some Holocene sand dunes.  As fierce winds raked the Snake River Plain, large dune fields formed here and there on the eastern fringes of the plain.  A giant dune towers on the west edge of the golf course.

Anyway, I scored a 27, once again right on my average there, and it was fun to share an afternoon with The Houn' Dawg.  How can you possibly beat a $3.25 green fee?  No way, José.

The upcoming mid-week temps for early November are progged for the mid-60's with no wind.  That's basically unheard of in Eastern Idaho.  A normal early November day would see a mix of sleet, freezing rain, blustery winds and maybe a snow squall here and there.  It would be mostly gray and people would be scurrying about trying to stay warm.  By some magic, this awesome fall weather gift continues to give us magical days.  As long as it stays like this, who knows when we will head south?

Cheers, jp
Posted by John Parsons at 7:46 AM