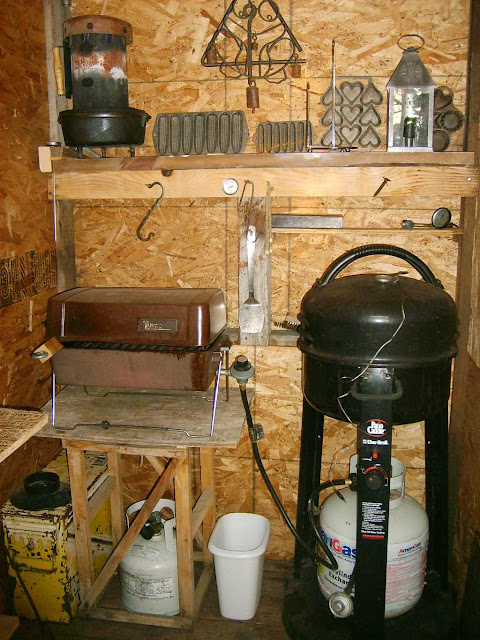 Gee, here's another Monday--no matter what I do, Monday always seems to be sitting on my doorstep waiting for a handout. Can't I sleep through Mondays or something? Last week, I started that cook shack project and I think I hit my head at least 15 times, banged knuckles and bloodied fingers, too. Blame it on Monday!

The photos in the slideshow below are self-explanatory. They show the inside of the cook shack. Since it's only about 30 sq. ft., it's kinda hard to take pictures inside. Sort of like aiming a camera within a fish bowl. Last night we fired off four chicken leg quarters. Each piece was in its own foil wrapper slathered with all sorts of tasty liquids and spices. They turned out delicious and we were yummified.

Susun and I spent a lot of quality time together down in the basement slinging and slogging our way through various piles and stacks of stuff. Packing for the Arizona Trip is coming along remarkably well.

As if wrassling stuff in the basement wasn't enough fun, I ripped into my workshop and gave it a complete R&R (roto-root and rearrangement). At one point it looked like a band of gypsies had set up camp in the backyard. But it's all safely stashed away now and you'd never know what disorganized mayhem lurked with the walls of that small space. The Monster Leaf Sucker now fits nicely alongside the snowblower and lawn mower.

We love Craigs List. Oh, yes we do. We sold our Equalizer hitch yesterday for $150. That makes a net income of $410 this month from items we've put on Craigs List. Arizona Friend Tom B. told us we'd be lucky to get $100 for the hitch. That's the beauty of Craigs List. Put it up there and sooner or later, somebody will bite the bait. But, wait, here's another success story regrading something that DIDN'T sell!

We listed a Char-Broil vertical smoker on Craigs List. We paid about $150 for this puppy in May 2009 and never used it once. Heck, we didn't even ever hook it to a propane tank. It just sat there in the crowded cook shack taking up space. After reading that "man cave" article awhile back, we decided to make a list of our priorities and get down to brass tacks. That meant the smoker had to go. We listed it for $80--a smokin' deal, if you will.

Lo and behold, we had several interested parties and one of them even made a date to come and buy it Saturday morning. I think we mentioned that in an earlier blog post. She never showed up. Why? Well, she sent a poignant little email that asked, "Is THIS the smoker you own?" (Click here to see the document she referenced.)Thank YOU, Shelly!

Um...what a surprise. I went out and checked and, sure enough, it WAS the smoker we had. OK, Class, here's what COULD have happened to Little Johnny. Little Johnny COULD have actually fired up the smoker in his little teeny, tiny cook shack with the door closed and then come back later and opened the door and accidentally sparked off the accumulated propane gas and been blown to Kingdom Come while meanwhile catching the cooking shack on fire and burning the adjacent big green truck to a blackened crisp. Meanwhile, Little Johnny would have spent considerable time in reconstructive surgery for the third degree burns on his face. I always wondered why my intuition said, "Don't bother lighting up that smoker." Now I know.

As a little side benefit of this stroke of pure luck, the person who alerted me to this potentially dangerous fate has a great website about kunekunes. Huh? What's that? Pigs. That's what it is. It's actually a VERY endearing website and I know most of the LBR's here will enjoy visiting it. Ah, Craigs List! Ain't it great!

We will be calling Char-Broil this morning to request a new gas hose to make the smoker safe and THEN we will sell it on Craigs List. Hopefully, the Kunekunes People will buy it and then we might get to visit their place.

There's that dastardly word again: "Hopefully." I didn't know "hopefully" was such a despised outlaw word. To hear some people talk about "hopefully," you'd think it was responsible for the demise of civilization as we know it. How do I know that? Well, I am now an avid read of a blog entitled "Throw Grammar from the Train." That's a play on words, of course, from the Danny DeVito movie: "Throw Momma from the Train."

You can click here to read "Throw Grammar from the Train." Anyway, that's how I discovered that some high brow people HATE the word "hopefully" and they would shoot it on sight if they saw it or heard it. All of which makes me Hillbilly Happy to overuse and abuse such a reviled word. Click here for the blog post that alerted me to my use of such a renegade piece of our American lexicon. Hopefully, a Cheshire Cat Smile will flicker across my face every time I use a word I hopefully love forever! Hopefully, you will find this news useful.

Today's the monthly day for another Parks & Recreation Commission meeting. High noon on the Skyline. Skyline Drive, that is. There's a slim chance I might be able to put in a word for the geo-cache ideas bandied about late last week.

We spent a LOT of time last night studying one aspect of the Verde Valley Wine industry and also the backstory for that little restaurant called Harry's Hideaway in Cornville. The whole social networking phenomena is coming of age down in the sleepy Verde Valley. The more I study the inter-connectivity of it all, the more intrigued I become. Much homework remains ahead before we can even think to begin telling the tale here on El Blog.

That's about it for Monday Morning. Have a great day and Cheers, jp
PS--Click here if the slideshow below won't load for you.

That there is one Type A, no wait it's a type AAA cookshack. AWESOME!!

I'm with the Goatherder on this one. You could market that cookshack, but please don't! The fine use of flake chip plywood, the proper placement of cast iron accoutrements (I can't spell that word) and knowing you won't blow yourself up with the smoker make me feel all warm and fuzzy. I wish I'd made it to IF to enjoy watching you buzz around that shack.