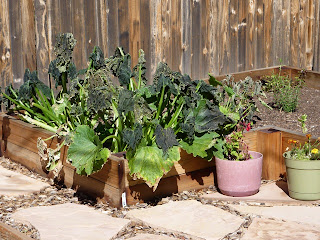 About 30 minutes ago, the KIDA weather station out at the airport recorded its first freezing temperature since last spring.  As of 6:53 AM MST, it was 31 degrees.  Actually, it's moderately unusual to have our first freeze this late in the seasons.  Afterall, it's October 12th!  Consider this--Flagstaff, Arizona, received its first freeze four days ago and Flag is located a mere 750 miles south of us.  The photo at right is from DF & LBR Maggie and shows her much loved squash plant after the first NORAZ freeze.

So, far, we're not freezing here on 12th Street.  It's 37 degrees in our backyard right now.  Our airport is always cooler than a protected "inner city" location.  But the footsteps of Ol' Man Winter echo loud and clear here.  We know that before this week is done, we're definitely going to get hard with temps well below 32.
It's time to wave goodbye to all of Susun's beautiful flowers--they sure have been a joy to savor this summer.

The protracted warmer-than-normal fall weather we've been having has caused the leaves to lollygag.  A few trees here and there have turned color but they are the exception.  The vast majority of the city's trees still look and act like it's late summer.  That's all about to change.  The shock of the first real freezes this week will send the leave into hyperdrive and the colors will start popping like the July 4th fireworks.  So far, the Monster Leaf Sucker has seen no action.  It hasn't even been fueled for the first time.  That, too, is about to change.

All of these changes are not lost on our sense of time and space.  We know we have a lot of work to do before we can head south this year.  We can look ahead and see a pretty non-stop schedule for the next few weeks.  Susun has been incredibly busy and productive for the past few days.  She spent her entire day Monday in her closet and storage drawers.  Her stuff now looks like it ought to be on a cover of one of those magazines that purport to tell you how to get organized.  I opined to her last night that she's more organized than she's ever been in our 24 years together.

I've been doing the Guy Thing.  Yesterday was entirely consumed with messing with vehicles.  The checklist of stuff we have to do to our vehicles is as long as my arm and we know from past experience that it will take days to check off all those important tasks for each of our four vehicles.

Our vehicle registrations expire at the end of December and we will have long since been in Arizona by then.  We checked the DMV and they said we could renew them early.  I toyed with the idea of trying to get one of Idaho's fine Whitewater license plates.  If the word "VERDE" would have been available, I would have thought seriously about popping for the $60 fee.  Alas, it is already taken.  It sure is a classy plate!  So, we're sticking with our existing plates.  They both would make great cribbage hands.  One is 8B X7607 and the other is 8B X7608.  They both would yield 12 points in cribbage.  Also, it's nice to keep the "8B" plates because they qualify us for "The Killer B's Club."  Rural Idahoans don't like anybody with a license plate that has a "B" in it.  They call us "The Killer B's."  Since Idaho license plate letters denote the counties, it's easy to tell where we are from.  Bonneville is the 8th county that begins with a "B."  Bannock would be "1B."  That's Pocatello.  Blackfoot, for example, is in Bingham and it's "4B."  Most of the "B" counties are filled with typical weekend warriors and yahoos who often are at the root of everything rural people dislike about city people.

Today's going to be more of the same for both of us.  Susun's going to burrow deep into the basement and I'm gonna continue doing The Guy Thing, messing with vehicles and such.  As much as we cherish fond fantasies of simply packing up and driving merrily off to Arizona, it simply doesn't happen that way.  Big migratory shifts take lots of planning and require lots of focused activity to make them happen safely and easily.

There's not much else going on right now.  Have a great day and Cheers!  jp
Posted by John Parsons at 7:27 AM