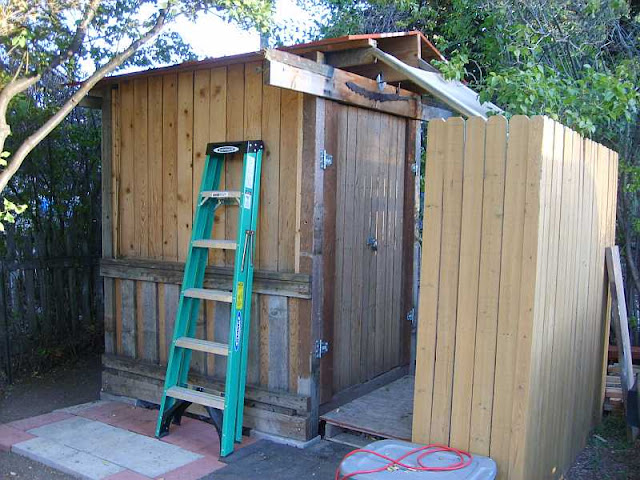 Even though yesterday was a typical Mun-dane-ity Monday, we managed to make much progress on several fronts. Susun spent her entire day on landscape-related activities. In the morning, she helped client Joanne for a few hours of yard work. Then she toiled away in our own yard well into Happy Hour. For my part, I mowed the grass yet again. That fall fertilizer has really kicked in and the grass must think it's springtime the way it is green and growing.

The Zuki spent the entire day down at Oswald's and didn't come home to roost until almost Happy Hour, too. Yes, we spent $100 but the value and service received was worth far more than that. Oswald's is so awesome, we can't speak highly enough of that little shop. After finishing this blog post, we will go post up over on the Zuki blog. (You can click here to read it.)

While the Zuki was confined to a service bay, we dived into the Cook Shack roof project. You may recall that we were slated to begin this project precisely two weeks ago on the day we discovered the Zuki sitting down south of Provo. As you now know, most of our spare time since then has been spent on the Zuki and not the Cook Shack roof project. Yesterday was D-Day (Demolish Day) for the old roof. Susun helped by trimming out the vegetation from around the perimeter of the shack. One thing led to another and by Happy Hour, we actually had the new roof decking in place and relatively square as well. There's nothing plumb or square about the shack so getting the roof "relatively square" is probably an oxymoron or a non-sequitur or maybe even a bad pun. Who knows?

Anyway, the Cook Shack roof is now well along the way to critical mass and completion. In the meantime, we decided to sell off our unused huge smoker and completely redo the 30 square foot interior of the shack. So much floor space, so many options, eh? This morning, I have to get out well before trash pickup to bundle trimmed branches and the old rotted roofing material for the trash guys. Unless you package up stuff like a Christmas present, they won't pick it up. It has to be all tied real nice and tidy. Luckily, I don't have to put bows on each package.

Yep, we're having digital camera meltdown here. First, Susun dropped her's in San Diego and it's kaput. Then the battery door broke completely off of mine and it's DOA. We have a lot of spare digitals so Susun inherited an older 7 mega pixel Kodak and I got a 5 megapixel Samsung. Her's is holding up well. Mine? Not so much. It's trying to croak and I doubt it will last through today. We might have to break down and go buy a new one soon. We have a real nice, great big 10 megapixel Fuji but it's too big to fit in my hip pouch. It's fine for special occasions but not as a daily driver. All that's left after the Fuji is a 4 megapixel with no zoom.

Even though we turned Comment Moderation off, no one commented last night. We're in a long-term Comment Drought. There's only been a couple of comments in many a day. And even though we don't write this blog to attract comments, we will appreciate them when they actually do show up.

The Spudboater is a pretty frequent commentator but she's been gone on a long Salmon River trip and is only now getting acclimated upon her return to Boise's civilized environs. We look forward to her often pointed barbs soon.

This morning, we meet with Dave C. the City Parks Boss. Terry M. and I will let Dave know we need some new projects to tackle or we are losing interest in our participation on the Commission. Neither one of us wants to be a "yes man" who simply sits at a meeting modding in agreement. If they want placeholder people, I'm sure there are lots of them available. But it's not in either Terry's makeup or mine to fill that role. It ought to be an interesting meeting.

On another note, we received a great email from Sue K. back in Michigan. It looks like our geo-caching project is back "on." That's exciting news and comes at a near perfect time. Thanks, Sue! Meanwhile, Jeff C. up in Challis emailed to say he has funding to print the Salmon River Guide in this fiscal year that starts October 1st. YEA, Jeff!

So, Johnny. Sorry I have been working my buttocks off, and couldn't comment, but it's close to quittin time down here at the state of dysfunction so here goes: Seems like you'd have at least one or maybe 20 rolls of duct tape to put on the back of one of those cameras so the batteries stay put.

And that cook shack has really improved since my last visit to your fair I de hoo Falls home. I'm thinkin my chickens need an upgrade and you would be da man to help me do it with all them thar tools and stuff you got at Harbor Freight. I've been thinking of something that looks like your cook shack, but not quite so big and goes on one of those wheeled carts like the ones at Home Depot and Lowes that you hall BIG stuff on. Harbor Freight often has ones that are two feet by about 4 feet so the coop couldn't hang too far over the edge. And it could be bolted through the cart floor to avoid tipping.

So, when you get tired of I Falls I think you should come here, since it's not so cold, and help me build one. Bring yer tools. And no, we can't build one while camping at C of R in ten days, either. Let's start menu planning and snow planning soon.