September's such a great month--we hate to see it go!  There's consolation in knowing October is at least as good and maybe even better.  What a pair of months.

OK, what about yesterday?  Here's the Top Ten highlights:
1) Played golf on the short course at Sand Creek with Terry M.  Made Par 3 on the first two holes!
2) Bought "Idiot's Guide to Geo-Caching" at Barnes & Noble.
3) Bought the Premium membership at Geo-Caching.com
4) Get up an email account and 3 blogs for our upcoming geo-caching projects.
5) Scored a new pair of awesome car ramps at the Youth Ranch
6) Found a US gov't 1943 steel serving tray at Deseret Industries
7) Ordered $72 worth of steel roofing for cook shack
8) Ripped into interior of cook shack and made it 100% simpler to use.
9) Studied the "Running of The Brides."
10) Baked some potatoes

OK, what about today?  Here's the Top Five Objectives:
1) Put the roofing felt on the cook shack.
2) Frame all four cook shack gables
3) Clean up the giant mess around cook shack
4) Relocate outdoor kitchen from courtyard to cook shack
5) Attach metal roof if supplies are available.

As you can tell, it's all about the cook shack right now.  It would be nice to begin October with that project totally finished.  All kidding aside, it really did help to make that list the other day after reading the "man cave" article.  It helped me focus on what's important out there in the cook shack.

As a result, I'm getting rid of two dutch ovens, the smoker, the charcoal grill, all the charcoal briquettes, and a lot of other flotsam and jetsam.  I'm paring it down to the bare essentials--the stuff I am actually going to use on a regular basis.  All the other Pack Rat Nest stuff is G-O-N-E!  I want that place to be lean and mean and CLEAN!  If we're lucky today, we will even get a music system and some LED Christmas lights installed out there, too.  This is serious stuff, ya know!

I sure am enjoying that little six hole short course at Sand Creek.  Terry and I had a ball out there.  It's the best $3.25 entertainment available right now.  We were hootin' and hollerin' at each other and high fivein' good shots and all the rest.  We both got some mean-spirited stares from the real golfers over on the adjacent real golf course.  Those real golfers have to be quiet and act reverent like they are in church or someplace sacred.  No celebrating over there--real golfers don't do that kid stuff.  That's the one thing that makes the kiddie course such a hoot--who cares what we do?  There's nobody there but us anyway.  Heck, Terry even decided to play one hole BACKWARDS!  Try that on a real golf course and you will probably be arrested for assault with a deadly weapon.  It's hilarious fun and a genuine delight.  Imagine my surprise yesterday when I hit the first ball off the number one tee and it sailed high, straight and true and landed on the green and rolled to within a few feet of the pin!  Now that's a thrill for somebody who hadn't played golf for 45 years.  Thanks, Houn Dawg for getting back into this arcane so-called "sport."

Looks like we're ramping up the geo-cache stuff.  If I spent almost $30 on it yesterday, it must be for real.  Terry and I are looking forward to finding our first geo-cache, maybe even today.  Before heading out to play golf, I ducked into the Barnes & Noble hoping to find "Geo-Caching for Dummies."  A woman looked on their computer and said the Dummies book wasn't in stock.  I peered over her shoulder and noticed that they had the Idiot's Guide.  So I told her I wasn't smart enough to be a dummy but that I was definitely an Idiot and would prefer that title instead.  She was not amused. Ironically, it turns out the Idiot's guide was written by the editors and Staff of Geo-Cache.Com, which one needs to join to be able to begin this so-called "sport."

There's a story about those car ramps.  I'd doubt any reader of this blog is aware that car ramps have become VERY expensive.  It's probably a liability issue.  I've seen plastic ones as high as $60 a pair!  I haven't even been able to find the old metal kind at any price.  So (to use a recurrent phrase) imagine my surprise when I found a brand new, never-used-even-once pair of them for $12 at the Youth Ranch.  These puppies are HEAVY!  And big.  And bulky.  Gee, they wouldn't even fit in the Zuki Sidekick.  What to do?  How to get them home?  So, imagine my surprise when, as if by magic, in walks Miss Susun!  It's the first time our paths have ever crossed at a local t-store and the timing couldn't have been more perfect.  I was able to put the ramps in the Nissan and everything worked out well.  Ah, Serendipity! 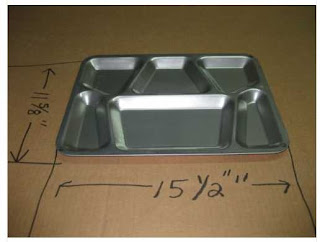 Here's a photo of the design of the US 1943 serving tray.  This picture came from an ebay listing I found this morning.  There's six trays for $40 on ebay.  I bought ours for a buck fifty.  It's very heavy steel.  So what are we gonna use it for, huh?  A relish tray, obviously!  Imagine the green onions, carrots, celery sticks, olives, radishes and so forth all tastefully arranged in those little compartments.  And imagine a relish tray with a real backstory!  What's not to like about something stamped U.S. and dated 1943? It's a spiff artifact, that's for sure.

And, finally, what about "The Running of The Brides?"  Susun attended an evening soiree with her girl friends last night.  One of them was in New York City this year helping her daughter prepare for her (the daughter's) wedding.  Susun's friend just happened to be there in time to actually experience the Running of The Brides.  As the story goes, some young woman actually took at punch at Susun's friend and demanded to have a wedding dress that she was holding.  Well, I was TOTALLY UNAWARE of such a phenomena as "The Running of the Brides."  I guess I have been living under a rock or something.  Anyway, I started Googling it and quickly became educated about this bizarre event.  Trust me, it's bizarre.  I'm not gonna bore you with the details here but if you wanna check it out yourself, prepare to be dumbstruck by the sheer craziness of this annual ritual.