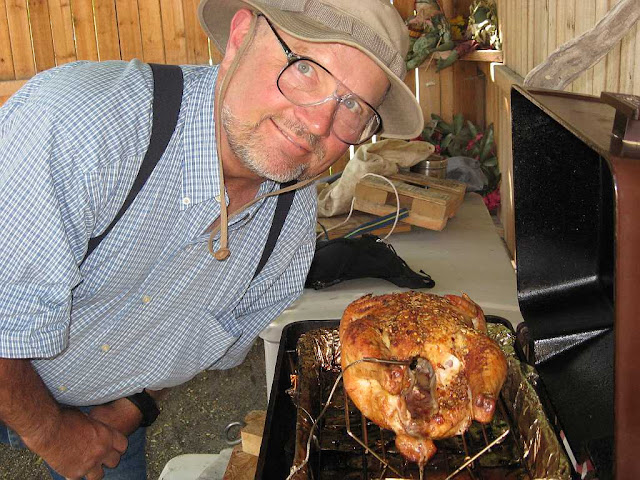 Luckily, we showed up just in the knick of time--the 90th minute the chicken had been baking. Our Target Temperature was 175 and the probe was registering 177. The little remote unit was beeping its brains out. We opened up El Turco and, lo, The Big Chicken Gig looked and smelled great! WHA-WHOOO!
--------------
(Added @ 4:20 pm) Soooo.....It's Deja Pollo. The Big Chicken Gig turned out to be a home run ball. So much of a home run that Little Johnny dashed off to the store and bought yet another 5.6 pound Big Chicken. We just doctored it up and popped it into El Turco--yeah, we're gittin' OCD about The Big Chicken Gig--that's a fact. However, if you tasted how good the first one turned out, you'd really wanna see if it was a fluke or if it could be repeated right away. We'll let you know within the next 90 minutes or so.
---------
(Added @ 6:20 pm) Yea, verily, it was not a fluke. It worked to perfection once again. This time the bird was bigger so it took 103 minutes to get up to 175 degrees in the thickest part of the chicken breast. It's cooled down now and resting on the indoor stove top awaiting a sharp knife and eager hands and equally sharp incisors. I really never knew I could roast chicken this well until today. Today's been a real Chicken Epiphany for me. I'm never gonna look at a fat chicken quite the same again. Life is finger lickin' GOOD! 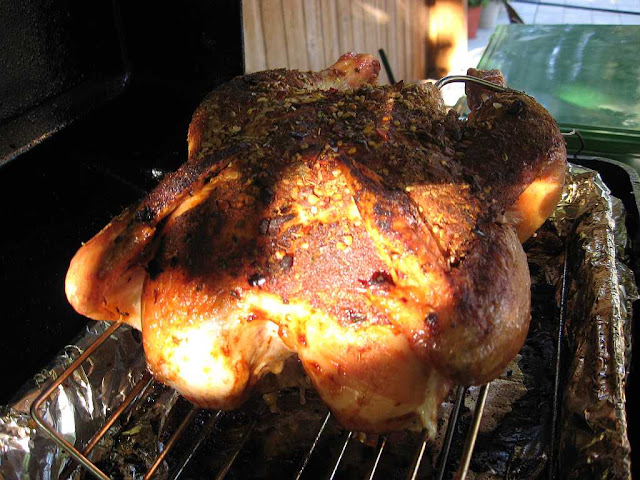