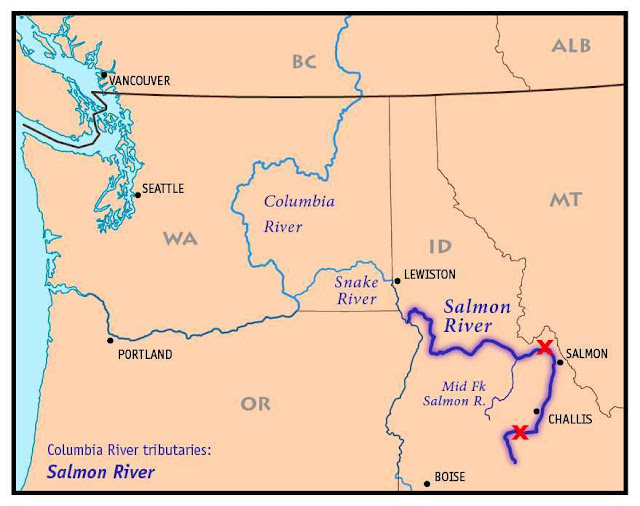 We've had some great comments on El Blog today--one via email, one via phone and one via the Blog Comment thingie.  Thanks Maggie, Stasea and Dave!  Siegfried is confused about our project location.  So, here's a blog post on that topic--"on location."

The Salmon River is odd and unique in many aspects.  First, it is said to be the longest undamned river remaining in the Lower 48 that is entirely with the boundaries of a single state.  Oddly, the Salmon had only one dam--Sunbeam--and it was dynamited by Idaho Fish and Game in the 1930's.  So, now there are no dams.

The Salmon then runs almost due north right through the heart of the Sawtooth Valley.  To the west are the jagged Sawtooth peaks for which are the icon for Idaho's mountains.  The Salmon gains considerable water flow as it passed by the Red Fish Lake outlet.  Then the Salmon reaches Stanley, Idaho, where it picks up the flow of Valley Creek.  This stream drains Stanley Lake which it a fairly large watershed in and of itself.  Here, the Salmon bend to the east and eventually appears as if it is running almost due east.  It picks up several substantial tributaries while making its easterly run.  The Yankee Fork and the East Fork are the two biggest of those tributaries.

When the Salmon has traveled about 60 miles, it reaches Round Valley and nearby Challis.  Here the river turns once more and begins to travel almost due north.  It slices through the heart of the Challis Volcanic Formation and knifes a few canyons along the way as well.  The Salmon River then brushes past a city named for the river (Salmon, Idaho) and continues northward toward Northfork, Idaho.  Here, the river picks up the flow of the Northfork and makes another sharp turn--this time almost due west.  About 40 miles downstream from Northfork, the Salmon enters the Frank Church River of No Return Wilderness, the largest wilderness area in the Lower 48.  It blasts through the some impressive ancient rocks collectively known as the Idaho Batholith while forcing its way over to the far western edge of Idaho.  Just for geographical grins, the Salmon makes one more turn to head almost due north again before finally bending westerly to finally join the Snake River not far south of Lewiston, Idaho.

We know of no other river that makes so many huge changes in direction.  Check it out on a map, you can easily see in large scale how dramatic these directional changes actually are.

Our project area is technically from Stanley to Corn Creek which is maybe 40-45 miles downstream from Northfork.  This past week, we narrowed the scope of the project from the east boundary of the Sawtooth National Recreation Area to Northfork.  That whacked off a lot of river miles and I'd guess we're looking at maybe 120 miles for the project area.  Although we spent a day up in the Sawtooth Valley last week, our main focus on this last trip was the Challis to Salmon stretch.

Its hard to get a grasp of the project area without looking at a map.  It's a huge area of Idaho, actually and that's why we've been racking up so many billable miles.  Heck, on Monday alone I think we logged about 350+ miles!  (And that's not counting the mileage from Idaho Falls and back.)

Well, we hope that clarifies the location aspect of comments rec'd today.

Thanks Siegfried!  Cheers, jp
Posted by John Parsons at 1:13 PM