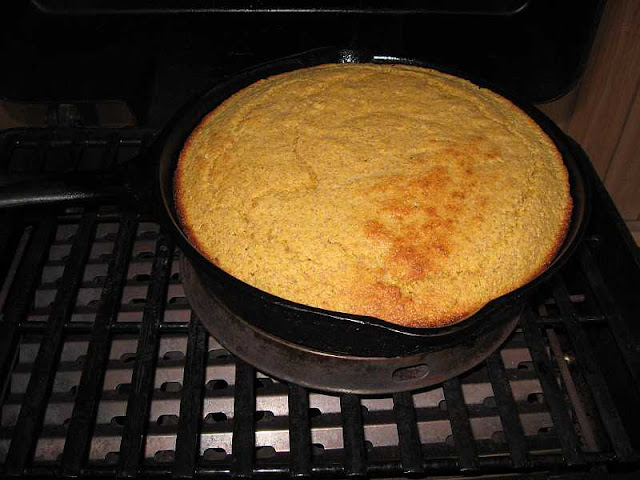 Johnny Montezuma wants to be Cornbread King!  Yep, shore 'nuf, pards, we is gonna go back to Cornbread Reform School--it's a little ol' one room cook shack down yonder along that shady lane by Ol' Man River. That's our big baking project this week--cornbread.

We're gonna bake it over and over until we get it right.  We're pretty danged close right now but there's a lot of work to do.  This morning's rendition is only the second batch we've baked in The Turco.  As you can see from the photo, it looks real good.  It smells real good, too.  In fact, we're using "the smell test" to determine it's doneness.  This batch needed a little more "doneness" in the middle but all the sides were perfect and it wasn't burned on the bottom--not even close.

We're using an old 1930's recipe that we keep modifying.  Today's mods were: use of organic pure cane sugar with no beet sugar; use of a whole ear of fresh Olathe bi-color sweet corn (uncooked); addition of 2 tbsp real bacon bits; and two tbsp adobo sauce from a can of chipotle peppers.  Also, I used an antique stainless steel hand beater to whip the eggs, milk, salt, sugar and adobo together.  The recipe calls for 2.5 teaspoons of baking powder but I rounded it up to a tablespoon.  I cut back on the milk to compensate for the moisture in the raw corn.  I'm using whole wheat flour instead of white flour.

Susun loves this batch--she keeps saying it's the best I've ever done.  Well, when it comes to cornbread, there's ALWAYS room for improvement--there's no such thing as "perfect" cornbread.  We can strive for perfection but we will never attain it.  That's one of the great existential realities of cornbread--it's all about the process and the journey because we will never get to cornbread nirvana--we can only try--we can never truly succeed.  I guess that's why I love baking cornbread--it's such a feng shui, ying and yang thing to do.  Even though I have just finished this batch, I am already scheming how to improve the next batch.  V.3.0 will include some Wisconsin buttermilk powder and some sour cream.  I will probably put in a schooch of baking soda, too, to compensate for the inherent acidity in the buttermilk and sour cream.  The sweet corn kernels really didn't come through the way I hoped they would.  They look nice but they don't register well on the taste buds.  Perhaps I will add more.  The cane sugar really rox.  I'm glad I dissolved it in the liquid mixture--that's a Keeper Technique.  I might experiment with adding some corn grits and perhaps use a different flour--maybe pastry flour with some soy flour added for coloration.  The adobo sauce was a good idea--the flavor didn't come through but it acted as a colorant and gave the product a much nicer beige patina.  The next time around we're going to vary the baking technique, too.  When the "Smell Test" is at its peak, we will turn off the direct flame in The Turco and then let it bake an additional 5 minutes with residual heat from the cast iron skillet and the cast aluminum oven.  That way it will get done in the middle without burning the sides or bottom.  Well, as you might expect, I will be writing a lot about cornbread this week.  It's Little Johnny's HOT project of the week!  WHA--WHOO!
Posted by John Parsons at 8:58 AM