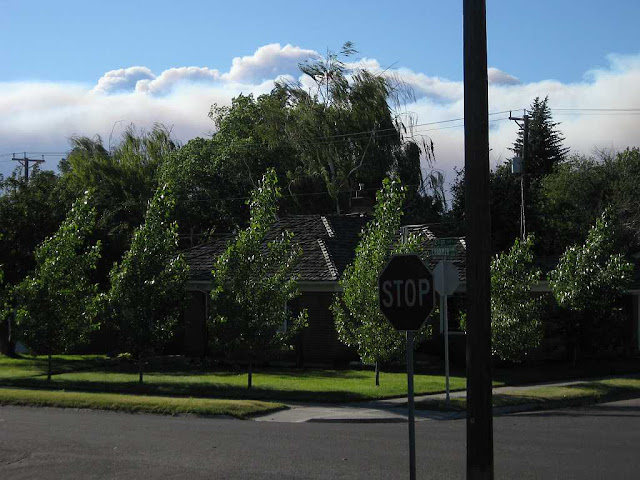 There was a huge wildfire yesterday in the desert west of the city.  It was visibly enormous with truly epic towering smoke clouds and a plume that stretched at least 60 miles--probably perhaps even 100 miles at it's peak.  The smoke plume was easily visible on NWS Doppler radar--that's how we know its length.  Even though the smoke gave the illusion of towering over the city, the fire was located at least 40 miles away out at "The Site," as locals call INL--The Idaho National Laboratory.  The fire started out at The Site about 2:30 pm and in a mere 7 hours it consumed FORTY SEVEN SQUARE MILES of desert vegetation.  Why so much?  One word: W-I-N-D.

The wind has been ferocious for the past two days and yesterday's wind reached its 55 mph crescendo  precisely during the time of the fire.  Today there's no wind to speak of so we assume the fire will be fully contained.  That's what happens with fires sweeping through the desert sagebrush.  If a howling wind is chasing the flames, the flames will run far, fast and furious for as long as the wind blows.  When the wind lays down, so does the fire.  It was both an awesome and fearsome sight to see yesterday as the dense smoke loomed seemingly on the fringes of the city. (The view above is from our west porch looking due northwest at Jana & Matt's house across the street.)

The smoke was so dense and thick that authorities actually closed a 32-mile stretch of I-15 and a 26 mile reach of Idaho State Highway 33!

One of the many reasons we picked Idaho Falls as a place to settle is because of fire, both structural and wildland fire types.  Idaho Falls is totally and completely surrounded by bright green, irrigated agricultural fields.  Miles and miles of some of America's best ag lands covered with barley, alfalfa and potatoes.  It's one huge, gigantic "defensible space" fire break.  There's absolutely no way for a wildland fire to threaten this city.  Can't be done.  Meanwhile, the City has been very generous with fire hydrants and they dot practically every corner in this community.  Water supply is unlimited and water pressure is about as high as it can get without popping the pipes. Fire stations are everywhere and the response time is hardly ever more than 2 minutes to anyplace in the city.  It's a very comforting reality that many communities simply can't enjoy.

We've lived for quite a bit of our lives in places where fire protection was merely a theoretical concept.  We've lived were wildland fire was an ever present and genuine danger.  It would have been entirely possible to have been trapped by fire on the Upper East Fork.  That thought really spooked us in 2007 when we were looking over our shoulders practically 24/7 because the forest was so incredibly tinder dry and the fire danger weighed heavily and constantly on our psyches.
Posted by John Parsons at 8:04 AM