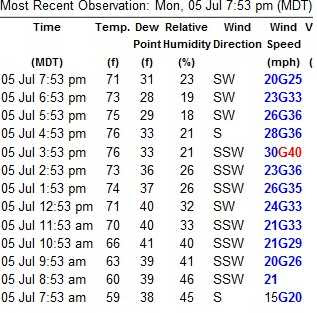 The wind has been blowing all day, as you can see from the embedded graphic.  It actually seems like it's been picking up some speed as the day wore on.  It's a Full Force day and it's not backing down. The wind is ripping here today.  Really ripping.  We went out and mowed the lawn early before the wind became abrasive, so that was a good thing.  Susun has been in Her typical Whirling Dervish mode, doing all the things that The High Speed Susun Loves to Do.  Her late Beloved Mom had the nick-name of "Turbo Tu Tu."  Sometimes, I think Susun has inherited the title of Turbo Tu Tu. Susun waved her magic wand over our basement and it's in better shape than it's been all summer. Thanks, Honey!

All of our plans for tomorrow have changed.  We're still heading up to the Centennial Valley.  But we're not going to be hiking.  We're going to stay far out in the meadowlands to avoid any confrontation(s) with a grizzly bear.  It's is now widely known that the Idaho Dept. of Fish & Game (IDFG) is going to begin baiting and trapping the grizzly bears in the Centennial Mountains.  They use road kill elk and moose to bait the bears.  Grizzly's are said to have a sense of smell 300 times more sensitive than a dog's.  We've visited one website today that purports a grizzly's sense of smell to be 100,000 times more sensitive than a human's.  Whatever the ratio, it's vast.  Those big puppies have a sniffer that won't quit.  Anyway, we don't want to go remotely near where we might run into one of them.  We say, "Give Bears their MySpace!"  Luckily, our hosts for tomorrow's outing are very flexible and they've decided instead to show us their ranch and just generally have pleasant, relaxing day.  Since they are running a good size cattle operation, it's going to be quite educational. We're looking forward to their company. Meanwhile, none of us will have to deal with the idea of coming eye-to-eye with a grizzly bear awakening from Fish & Game's version of Bear Prozac.

You may think we're getting a little OCD about bears but if you lived here I doubt you would have that impression.  Bears rule much of the choicest backcountry and their danger there is real and ever present.  Those who fail to understand or heed this reality easily can pay a high price indeed.
Posted by John Parsons at 8:50 PM

Stasea was here 7.5.2010 2:00 am Hawaii
time. All caught up on the daily news and
lovin it!! Your fireworks pictures are amazing!
What kind of camera? Loved mom and the
creatures!! Maybe mom can call me before
you leave or from the road. Xoxo