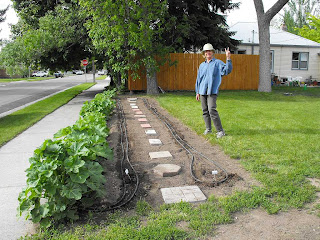 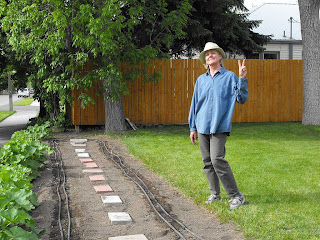 We just took some photos of Susun's Garden. She planted it today. It's been quite the work in progress this week. We will write more about this and her other gardens later tonight or tomorrow morning. We just wanted to get these two photos posted ASAP.

Tis a little after 6 am Saturday as we resume writing this post. Goatherder left a great comment. You can read it below. Ah, tis true, Goatherder, we have a bumper crop of stepping stones. They actually propagate like creosote bush--by mysterious ways deep underground where there is only the One Great Stepping Stone!

Anyone who knows Susun knows she's as addicted to gardening as I am the internet. I can sit for hours in front of this screen happy as a clam. Susun can sit for hours messing with plants and be happy as a clam. She practically radiates a full body smile when she is messing with plants. It doesn't matter much WHAT the plant is, just as long as it belongs in the Plant Kingdom. Indoor plants, outdoor plants or plants that can't make up their mind--it doesn't matter, just put some plants in her hands and she's a really Happy Camper.

She's been so happy to be home this week. Luckily, the weird weather we've been having lately delayed the typical prime time window for messing with a garden. It's been too cold and wet to do so. Even though our current weather isn't optimal, it's still OK to get the garden ready. The little garden shown in the photos is "native soil." It somehow escaped being scraped off when the house was built in 1939 and somehow survived intact until we "discovered" it by chance in 2008. There was once a creek in this vicinity that's long since been dried up and vanished. On the south side of the creek were reputed to be some windblown dunes of rich soil derived from what are now nearby potato fields. People told us we might get lucky and have some of that ancestral "creek sand" in our backyard. Indeed! It's prolific soil, that's for sure. We had a surprisingly great garden in 2008 but nothing in 2009. No time. Well, Susun's making up for lost time this year. She even forced me into action to rototill the area. She's added various amendments and carefully laid out her soaker hoses BEFORE she planted this time. Meanwhile, she studiously laid out the stepping stone with a real PhD pattern.

You'll note the vegetation on the left of the garden. Those are perennial hollyhocks. Some local gardeners consider them Public Enemy #1. They take over!
We planted them from seed in early 2008 to stabilize the slope between our yard and the sidewalk. Call it the lazy man's method of "bank stabilization." The hollyhocks are incredible. Last year they all rose at least 10 feet and a lot of them were 12. Some were even higher! It was an amazing sight. One nice thing the hocks do for the garden is shade it from the intense late afternoon sunshine.

Susun's also been working on all her container flowers as well as the landscape beds in front of the house. There's more than enough to keep her hopping. Luckily, all I have to do is mow the yard and surf the internet. Whew.

Susun is really enjoying a special session of gardening today. She's in charge of planting the flagship Hilda McClure Garden on the City's West Bank in front of the landmark Red Lion hotel. The Hilda Garden has a commanding view of The Falls. Susun has lined up a lot of women to help her plant. The City will be delivering a truckload of flowers at 8:30 am and then all spades will break lose. I'm going to be the official photographer and try to stay out of the way of flailing garden gloves. It should all be over before lunch. It's certainly not the world's best day for such an activity. Very gray skies, temps in the 40's and wind, too. (As of 7:10 am it's raining!) Don't worry, when women and a truck load of flowers cross paths, there's a will AND a way to "git 'er dun."

PS--Looks like we got the Greenbelt webcam back in action. I determined who's in charge of it and sent them a pointed email. POOF! That's one thing we love about Idaho Falls--you ask the city to do something and BAM--they do it immediately. Check the webcam, the river's running around 24,000 cfs.
Posted by John Parsons at 6:00 PM

I always wondered where concrete stepping stones came from. Who knew they grow them in Eye-dee-hoe....are they open pollinated?