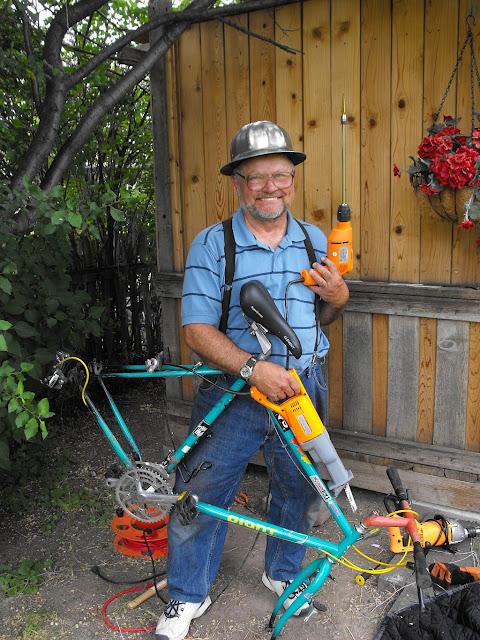 A Saga? Absolutely! Sensible? No. Safe? Maybe. Smart? Definitely not. Stubborn? Yes. Strenuous? Yes. Stupid? Probably. Smart? Probably not. So have a seat and lemme tell ya a story.

It all started at the June 19th Methodist Church rummage sale. (See photo below) We bought this Trojan Horse for a mere $5. Little did we know the black hole vortex lurking within its colorful frame. The next day I casually attempted to free the frozen seat post. It wouldn't budge. I used a large pipe wrench. No luck. I put a 3 foot cheater bar on the wrench. No luck. Meanwhile, we had to pack for the Dubois trip so I called off a full frontal assault on the post, making a mental note to take up where I left off upon our return.

After getting back into the Idaho Falls routine Saturday and enjoying a leisurely Sunday morning, I decided it was time to throw down the gauntlet with the bicycle seat post. I spent 3 hours on it Sunday. It was quite a ridiculous episode. I tried silicone. No luck. I huffed and puffed over various wrench schemes. I wailed on the post with two sledge hammers. I read up on the topic online. One tip involved using ammonia so I got some of that smelly stuff. All I succeeded in doing was getting ammonia all over the place and making a mess. The other online advice described the nuclear option. This involves cutting the top of the seat post and filing away at the innards with a hack saw blade in the same manner inmates escape from jail cells. This plan did not work. Meanwhile, I decided to poke a 4.5 amp sawzall down in the tube. This is not a safe plan. So I suited up like some gladiator. I wore three layers of clothing including a flannel shirt and a big quilted wintertime hoodie. I put on the hard hat, wore two layers of eye protection and two layers of gloves. Meanwhile, I blazed away with the sawzall like some mad inventor. No luck. It only made matters worse. Finally, I decided to drop back ten and punt to Harbor Freight. I figured I could find something there to ease my frustrations. Sure enough, I came home with a titanium step drill. I suited back up in the safety clothing and poked the whirling drill into the seat post. The only thing this did was make the situation even more helpless.
Finally, I grew tired of the whole thing and Happy Hour arrived. Clearly, it was time to call it quits.

The next day I was drawn back to the fruitless project like a moth to the candle flame. I spent a few more hours on the project on Monday. Each of the two bike shops told me it was useless and the frame was trash and to throw it in the dumpster as it wasn't worth anything anyway. I should have probably heeded their advice but I was hooked and couldn't stop investing time and money in the project.
There are some projects like that. Mentally and rationally, you know they are pointless. They start nowhere and go nowhere. How could anyone in their right mind justify spending so much time on a $5 bike frame? It's not logical and it makes no sense. I have no justification for this project whatsoever. It's just one of those projects which reach out and grab my psyche and won't let go. I became determined to WIN--to smite that seat post at all costs no matter how long it took. I won't back down and I won't blink. I will WIN--that was my mindset and psychology. (Click here for a snippet of the famous Tom Petty song.)

Tuesday dawned yet another beautiful day ripe for all the wonderful things one could do besides fight a titanic tussle with a frozen bicycle seat post that's now ground down far below the level of the top of the tube--so far, in fact, it couldn't be reached with needle nose pliers!

I called some rental companies inquiring about renting large drill bits. No luck. Finally, in desperation, I called the Idaho Falls Machine Shop. It's on Northgate Mile. It's as Old School as Old School gets. You can't get any more Old School than this machine shop. It looks, smells and feels like something out of the 19th Century. The employees are mostly biker dudes with scraggly hair and wallets on chains. Every one is covered in grease and their hands are black. The place is filled with gigantic, antique, noisy, whirling milling machines, the kind that once made America great. It's not a foo-foo place. So this biker dude takes a look at the bike and simply grabs it out of my hands and heads to the back shop. He calls two other burly bubba dudes to come and help him wrassle the bike under a drill press that's about as big as our Suzuki. Then these guys proceed to spend FORTY FIVE minutes wrassling with my bicycle. I can peek between machines and see huge drill bits going in and out of the tube, sometimes even getting STUCK in the tube. I hear muffled cussing and see frowning faces. Finally, the biker dude comes and hands me the bike and said they failed and it can't be extracted. Meanwhile, I am expecting him to tell me the bill would be $100 and I would faint there right on the spot. But he says, "Gimme five bucks and go!" Well, that almost caused me to faint.

So I got the heck out of there and then took the bike over to the parking lot warehouse sale at Bill's Bike Shop. (Note: Our house is a mere 3 blocks from TWO bicycle shops! How good is that?) Sure enough I find a seat post that "might" fit the new hole. I ask if I can take the $6 post home to see if I can get it to work and they say "yes." So, the next chapter begins. This chapter only took another 3 hours. I pounded, I wailed. I pried. I drilled. Pry bars got totally stuck in the tube. Only by minor miracles were they extracted. Finally, I knew if I could find a drill extender I might have a chance. So I went back to Harbor Freight. They told me they didn't sell such a tool. Well, I didn't believe them so I roamed around the store until I found the exact tool I was looking for. And then, just to be snooty, I called over the Staff and gave them a lecture and said next time somebody comes into this store and asks how to find an extender--HERE IT IS--don't tell them you don't sell it, OK? And I took my tool and headed back to the bicycle battlefield where tools of all descriptions lay strewn in disarray. I commenced to drill away some of the final detritus and, much to my distress, I realize I was drilling right through the freaking bicycle frame! OUCH! So, we stopped that plan right away. Then, I took the $6 seat post and put it into the vice and cut it in half. Then I wailed on the seat tube opening with a ball peen hammer and put in a shim and proceeded to get the NEW seat post frozen and stuck in place. Wholly Molely, what next? By this time, I was at my wits end. I had come full circle, getting a frozen seat post drilled and broken out only to get another post stuck in its place. How bad can this black hole get? So, I huffed and puffed and was so happy when the new seat post finally came loose. I removed the shim, whacked away with the ball peen hammer and FINALLY was able to get the new seat post properly mounted and securely fastened. I threw the frame over my shoulder and rang our doorbells to show Susun. She admits she had totally given up any hope of success on this pointless project. I don't blame her--any right minded person would agree that the whole thing was pointless and doomed. But somehow I succeeded. Go figure. She took my picture.
It sure made me happy. I took the bike frame over to the bike shop to show it off and then to the machine shop to show the greasy biker dudes. A five dollar bike never had so much fun!

Well, there's lots more to do to restore this Old Beater Bike. it needs a chain. The two tires are rotted out. I suppose there will be other stuff, too. I don't care. I'm "all in" on this one. It doesn't matter what this bike throws at me--I will WIN and one day I will ride that bike happily down the pathway.

So what's the cost of all of this, so far? We're into the bike for $16.36 so far. I've spent another $20 on tools. I've sprained a wrist and have a real sore left thumb. Luckily, I haven't been lost any blood--no cuts or nicks. I haven't smashed any fingers either. That's remarkable. Timewise, we're nearing a 10 hours investment. That's truly ridiculous but it's a fact. I'm not counting the gasoline for all the running around. The saga has only really just begun. The Seat Story has its own series of chapters but I'm sure the rest of the bike will produce some memorable stories as well. Cheers, jp 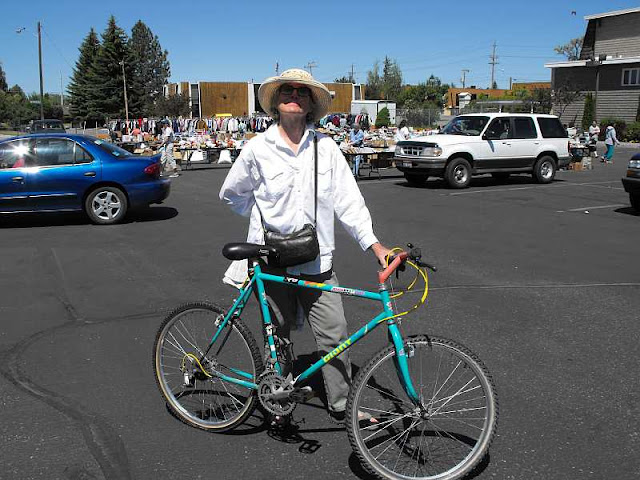