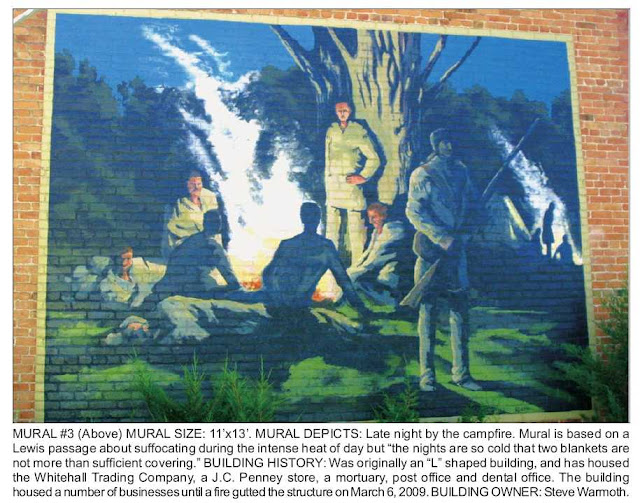 Here's a heck of a story. Back in June 2005, we were doing an NVUM Secret Shopper trip. It was a long one and took weeks. We were about halfway through when we came upon a little Montana town called Whitehall. Well, back in 2005 it was the Bicentennial of the Lewis & Clark Journey. The Whitehall vicinity was right smack on the L&C route. Anyway, Whitehall's claim to fame was a series of really cool murals depicting L&C's presence in that area. We were fascinated by the murals--it was like finding a big fat diamond lying in the street. One of the murals really stuck in my mind. I have often repeated my recollection of the words from that mural. This spring I became even more interested in those words and set out to get them verbatim. First, I tried finding them in online editions of the L&C journals. No luck. Then I had a brainstorm--go to the Whitehall newspaper's website and "ask the editor." OK, so far, so good. The Editor sent a reply weeks ago and said he would "look into it." Weeks passed. This morning, poof, there it was in the inbox. Ain't that sweet? You betcha!

Basically, it's an endearing quote to me because of the diurnal dichotomy of Northern Rockies weather--burn and scorch in the day time and freeze at night. It's a true today as it was in 1805!

For my Techie reader(s): The file came in as a 3.3 megabyte PDF. I used Zamzar's online service to convert the PDF to a JPG and it came in at 600 KB. I used Irfanview to rotate the JPG and drop it to a 90KB file.

Cheers, jp
Posted by John Parsons at 8:41 AM