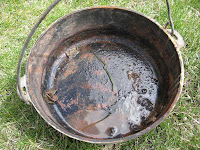 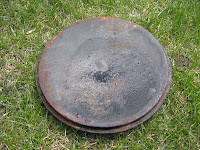 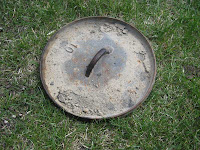 Anyone who mistreats a cast iron dutch oven is at least a  Dunce and maybe even a Dastardly Dude.  All those who abuse dutch ovens shall reside in the Dutch Oven Dungeon (DOD).   Sadly, I have been in the DOD for many months wearing my Dunce Cap.  Last summer, I baked some potatoes in my favorite historical dutch oven and forgot to clean it.  We're talking JUNE here, folks.  And forgetting to clean it means I actually left potatoes inside the oven.  We're talking a Dutch Over Disaster of the first order here, folks.  Unforgivable.  Despicable. Ridiculous.  These are words that come to mind as the Devil of DOD places hot charcoal briquettes under my fingernails.  How could I be so slovenly and profane?  What am I? A Neanderthal?  Well, yeah, I guess so.

The fate of this poor dutch oven has been haunting me for months, even as we took two trips down and back to Arizona.  Finally, Wednesday, I summoned the courage, dollars, time, fortitude and tenacity to face up to, tackle and remedy the unacceptable situation.  But it wasn't easy and it took Dear Friend Harbor Freight to help me get over the top and across the finish line on this one.

Wednesday, I popped the lid on the oven, dumped out the smelly contents and filled the oven with vinegar.  I also covered the lid with vinegar, too.  Then I let this sit about 24 hours.  Yesterday, I went to HF and bought a hot rod 4.5 inch angle grinder and the baddest of the bad wire wheels they sell.  This wire wheel is wicked.  Just looking at it hurts.  Touch it and it will definitely hurt you--and that's even before it starts spinning like a whirling dervish.

I emptied out the iron oven, mopped up the excess vinegar and dived into to the task.  Halfway through, the brand new grinder simply quit.  Poof, it said, I'm done.  I'm not sure if that was because its innards failed or it just had sympathy for the oven.  Either way, it was DOA.  So, I packaged it back up and hot footed it over to HF and took the oven along and showed it to the cashier and said, "Hey, this is all I was trying to do and the danged thing quit on me."  The other customers in line were turning up their noses and trying to act like I was a homeless person or something.

Meanwhile, the clerk realized his best option was to get me back out of the store as soon as possible so he said, "Just go get another one and sign this and yer good to go."  It was that simple.  Poof, gone.  I think the presence of the decrepit dutch oven helped my cause a lot. 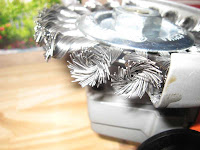 Meanwhile, on the way back home, all 4 minutes of it, I realized I had messed up.  The wire brush had rubbed against the disk guard and the extra friction had burned up the grinder motor.  Upon arriving home, I dutifully removed the disk guard.  (DO NOT DO THIS!)  Let me tell you, that wire thing really screamed without the guard to slow it down.  Luckily, I was wearing really stout gloves so that each time my fingers accidentally made contact with the wire brush it only destroyed a portion of the glove and not my fingertips.  It's very difficult to use a grinder without a guard and NOT get your fingers into the wire brush.

Well, I really went to town once I figured out The Plan.  I had the inside of that oven and lid shiny enough to use as a signal mirror.  Meanwhile, the brush was flying so fast it actually made two musical notes--very high pitched notes.  Our neighbor Chuck plays the bagpipes so he is tuned into musical notes.  He heard them and came over to investigate.  He was duly pleased that I was showing some obvious non-Neanderthal care and concern for my oven.  I don't think either of us had ever seen as shiny an oven before. Talk about buff!

Then, for good measure and to somewhat help restore my sagging dutch oven karma, I brought out our other two really big ovens and buffed off surface rust from their lids.  (Their innards are OK.)

Meanwhile Susun came out to survey the situation and realized it was THE historical dutch oven.  It's the one I cooked potatoes and onions in on our very first date together back in 1987.  She swooned when she realized I was bringing it back to life again.  Her motherly genes immediately adopted it and she insisted on reseasoning it right and proper.  Somehow she scrounged a package of Crisco someplace in the neighborhood.  Much to our surprise, nobody had any lard lying around (well, lard we could use anyway) so she settled for Crisco.

She carefully cleaned the oven and then dried it in our electric oven, baking slowly at 225 for 45 minutes.  Then she coated the oven with Crisco and baked it at 350 for an hour.  Voila!  An almost brand new dutch oven.  All three ovens are now stacked happily once again together in the Camping Warehouse (AKA: Our garage).

I promise to one and all that I will never, ever treat a dutch oven this badly again as long as I live!  Cheers, jp 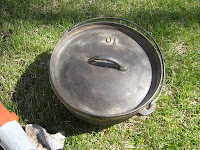 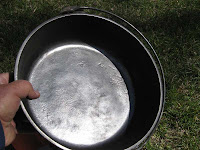 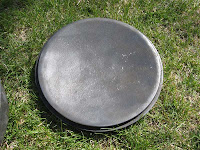