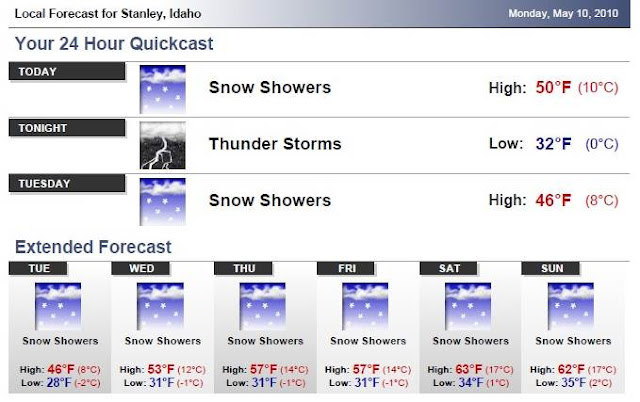 (NOTE added @ 6:50 am--We went to Hamweather.Com and typed in Stanley.  WOW--if this forecast above is correct, we're in tall clover for this upcoming weekend!  The narrative below was written an hour earlier this morning.)
---------------------
As odd as it may seem, we appear to be getting a break in the weather for our Stanley trip.  Here's the meat of the morning discussion:

All heck is breaking loose during the early part of this week.  Check out the OTHER part of this morning's discussion!

That's cutting it pretty danged close. It's still going to be quite cold overnight. However, it now looks like the possibility of temps in the teens is remote. I'd now be guessing the overnight lows will be mid to possibly upper 20's. Every degree counts when you're down in that range. Daytime highs might actually be in the 50's instead of the 40's. That's a biggie.

We'd like to do more yardwork today. It looks like the main thrust of the upcoming storm won't arrive until this evening. So, we might just be able to do another de-thatching job, lay down fertilizer and then kick back and wait for Mother Nature to water in the fertilizer. How sweet!

Looks like the railing job is fading fast. Eddie never got back with me last week and we wouldn't be able to start now until the second week of June. The BLM's lack of a timely response has nixed any thought of doing the Salmon River Guide this year. Meanwhile, RSVP could have locked up in for some volunteer work in Custer and Lemhi Counties. That's out of the question now and might not be possible at all in the future, too.

We often call ourselves "fishermen." We put a lot of hooks in the water and use a lot of different tackle. We play a lot of the lakes and streams of life. We tie on a Big Rig for the Big Gig. It's our goal to land the Big Gig. One has to have a LOT of poles and lures and flies in the water all the time in order to be ready when the Big Gig strikes. After that first bite, we have to be able to play the Big Gig correctly to land it in our boat. So it was this spring that we fished a wide range of waters: Parks & Recreation, BLM, RSVP and NVUM. NVUM bit first and bit hard. Hey, we love volunteering as much or more than most people. But with NVUM, we're making actual real money for our time logged. The cash flow from NVUM could really make this year a lot more "livable," if you know what we mean.

We're sorry that those other Big Gigs didn't materialize or even show a hint of coming into play. However, that's the way it goes. We've fished for a lot of Big Gigs since we first retired in 2001. We know how to recognize that first strike when one bites. We've lost our share of Big Gigs, some have slipped off the hook just as we were landing them in our boat. But we've landed our fair share of Big Gigs, too, and so we know how this game is played. Once you get one on the line, ya gotta dance with the one that brung ya. That's the way it goes.

Cheers, jp
Posted by John Parsons at 5:47 AM