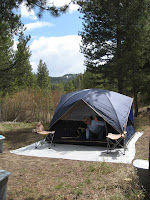 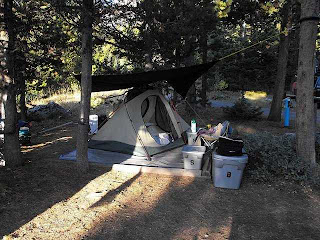 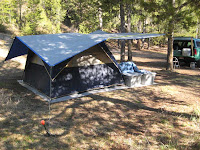 This camping trip was the first in many years where we used our so-called "Big Tent."  You can see the Big Tent in two photos above--one with no tarp and one with the tarp.  Our Small Tent is sandwiched between the two photos.  The picture of the Small Tent was taken at Jenny Lake in the Tetons last September. (In case you never saw that photo album, click here to see it.)

We are happy to be using the Big Tent again.  It's HUGE compared to the small tent.  I think it's 9x9, probably larger.  We can stand up in it.  It can hold two nice chairs and a table.  There's so much room it almost feels like a house.

Here's a history of the Big Tent.  Back in September 2002, our straw house was flooded when the adjacent wash overtopped its banks.  The place was a mess.  The only thing we could do was open all the windows and go camping and forget about it.  We spent about 6 weeks camping and came home and it had dried out fine and there was no mold and life was OK after a long, tedious cleanup process.

Well, anyway, we first went up to Kaibab Lake near Williams to camp.  We were hanging out getting mostly bored there and decided to go into Flagstaff for the Parents Day Parking Lot Sale at the now defunct Popular Outdoor Outfitters.  The parking lot was packed with deal seekers.  We found this tent for $30!  We couldn't really tell what kind of a tent it was but for $30, we took a chance and bought it and took it back to camp outside Williams.  When we set it up we were dazzled.  The next day, we hustled back to Flagstaff and bought the remainder of that style of tent--they had two more.  All-in-all the 3 identical tents cost us less than $100.

Meanwhile, we got a call from Sue K. about an NVUM trip back east.  We had to pack hurriedly and take off on a Thursday morning hoping to get into an official Southern Indiana Forest Service wilderness BEFORE 9 am Sunday morning!  The first real test of the Big Tent came when we pulled into some Indiana State Park Saturday night in the rain.  It was near midnight and everyone else camped there was presumably sound asleep.  We somehow set up the Big Tent without a flashlight and without speaking to each other.  We already knew it that well.  If a man and a woman can set up a tent in the pitch black dark in a rainstorm without getting into an argument, trust me, that tent is a keeper.

Well, the tents went on to play a huge role in our lives.  That road trip was 6,600 miles in 28 days and the tent played a giant part of making the trip successful.  The next year we got sent on a 7,000 mile road trip and then wound up camping along the Rogue River near Gold Beach for over 2 months in the Big Tent.  It was luxury compared to any tents we'd ever had before that time.  In 2004 we moved back into the pop up camper lifestyle and stored the Big Tents.  They sat idle and dormant for years.  When we sold off all our 18 tent inventory in 2006, we kept those tents.  they went into storage in Sedona and survived another potlatch-style yard sale in November 2008.

Late, late in our March-April trip this year--I mean REALLY late--we somehow got to thinking about those Big Tents.  We were up in Flagstaff visiting Nancy and Maggie and decided to go back through Oak Creek Canyon to try to get the tents from storage at Bob's garage.   Luckily, Bob was there and we drove off with all 3 tents.

Why 3 tents?  Well, tents wear out.  Zippers fail.  Fabric gets ripped.  Poles break.  Floors get holes.  Seams separate.  We reasoned if we had three of them, we could always swap out various parts and have one tent in good condition all the time.  This plan has served us well now for nearly 8 years!

Prior to our recent trip, we dug out all 3 tents and put them up to decide on which body, fly and pole set was in the best condition.  Much to our surprise, we realized that one body and fly had never been used.  YIPPEE!  Off we went with a brand new Big Tent!  How good is that?  Very good!

I think this blog post is too long already so I will tell the story of the other tent over on a page at the Google Site.  When it's written, I will put in a link here.

Anyway, that's the story of the Big Tent you see in the photos above.  It's got quite the long story, eh?

Cheers, jp
Posted by John Parsons at 8:08 AM

We used to have a Big Tent when our family went camping. Me, wife Mary, 4 kids and, sometimes Grandma - but we all fit. Each person had a duffle bag for their stuff and we had a kitchen box in the back of the VW bus. There was a storage box on the roof and we pulled a one- wheeled trailer.It wasn't the set-up you guys have, but it worked for us as we roamed the West and even went back to the East to see our relatives. They were good times.
I was amazed to see that Idaho Falls is on US Route 20, because that route goes through my growing-up home in Angola, NY. I used to watch traffic head West on that road and wish that I was going there, too. Well, I finally did and found beauty, adventure and a new home where the sun set.
John - you exhaust me just reading about your daily exploits!!
You have a great life - may it continue for many years.
Tell Susun that I have 4 rehearsals and concerts this week. Singing two Requiems - one by Faure and the other by John Rutter. I'm going to be tired by Sat. night.