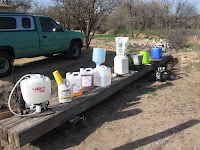 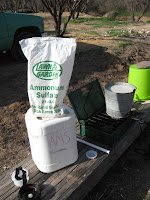 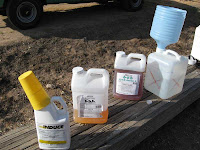 We spent 4 hours today doing The Spray Thing.  It took the better part of an hour to get set up and probably more than 30 minutes to de-rig and clear everything.  I guess I was spraying about 2 hours, plus or minus.

Susun fixed a real nice lunch and now it's time to get back in action once again.  This afternoon we're going to do more burning of all the dead weeds that were killed during the first spray thing March 24.  After we finish this afternoon, we should have the best defensible space possible around this house.  There's nothing better than black!  Black don't burn! 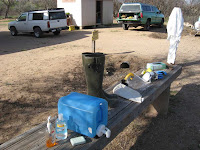 We will do at least two more sprays before we leave.  There's a wicked plant we call a "tomato plant" that is covered with stickers.  We despise the thing.  Well, it's germinating right now and I think it's kind of falling between the cracks of our spray schedule.  It looks like we will have to spray just for that particular plant.  Then we will do a final spray of the pre-emergent.  That's the one we are really pinning our hopes on.  We hope that it works well enough to kill the weed seeds and prevent their sprouting when the summer monsoon rains arrive.  If the pre-emergent does it's job then we should be able to show up here next November or December and not stare a huge amount of weed work in the face.  That's the goal--a weed free arrival next fall.  It's Weed Wars, there's no doubt about it.

About the photos:  We thought we'd photo document our setup for Year 2010.  It will be interesting to look back on it in the future and see if and how it might have changed.  The top row is the chemical and spray set up.  The bottom two photos show our PPE--Personal Protective Equipment.  We used the camp stove to heat water to dissolve the AMS (ammonium sulfate) so we could make a big jug of it.  The role of AMS is to help neutralize the hard water here.  The Induce is a non-ionic surfactant.  We're using glyphosate and 2-4-D.  The big jugs are in real concentrated form (41% for the glyphostate and 48 % for the 2-4-D!)

We really got our mixing gig wired up this time around--it was a lot more efficient and safer, too.  You can see all the stuff we wear in the bottom photos.  The Tyvek suit is hanging on the post in the background.  We use the neoprene gloves when we are spraying and the vinyl gloves at all other times.  This time we got our handwash setup much better and we were able to take a break about 45 minutes into the spraying to drink some water.  That helped a LOT.  It's a hassle.  It's expensive.  It's a lot of work.  But it's WAAAAY easier than weed eating!
Posted by John Parsons at 2:36 PM