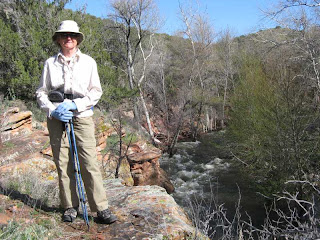 We enjoyed a great campfire last night.  We spent most of the evening telling stories about how we started building The Straw House on April Fool's Day 1994.  It seems incredible to both of us that it was "only" sixteen years ago.  Gee, all the stuff that's happened in those 16 years is pretty incredible.  I was 46 years old then and Susun, 47.  Wonder what changes will happen in the next sixteen years--I'll be 78 then and Susun, 79.

I remember at least the dinner of my 16th birthday really well--it was a huge steak at the Attica Hotel in Attica, Indiana. My parents were real big on 16th birthdays and they made me feel real special.  I thought turning 16 meant that I had really hit the Big Time.  HA!  The very next day, of course, is burned in my memory and the memory of all those alive at the time--the violent death of President Kennedy.  Who can possibly forget where they were or what they were doing when that news broke?

At the end of my second 16 year span, I reached a true milestone in my life--moving to Arizona on Valentine's Day 1979.  The third 16 year interval was marked by the completion of this straw house and really hitting stride on what became the culmination of my efforts to "save" the Verde River.  I won't know how the 4th 16-year chapter of my life ends for another couple of years---November 2012 to be exact.  It will be very interesting to see how it all evolves.

Last night, we both realized that the 16 year cycle for The Straw House has brought some really welcome developments.  For the first time, we are resting easy with the weeds here.  That may sound trivial to you but to us it's HUGE.  No one has ANY idea of the amount of time and actual blood, sweat and, yes, tears, I have shed over years of literal hand-to-hand combat with the weeds and the mesquites.  My arms bear lifetime scars from this battle.  For ALL of the time we have owned this property, I have always actually dreaded the onset of weed season.  It was a genuine fear and loathing thing.  Heck, it was never even comfortable to even walk around this property--you would always wind up with some sort of stickers in your socks and shoes.
I never "beat the weeds," they always won-year after freaking year.

Last night, for the first time, we enjoyed total freedom from Weed Anxiety. You have no idea how blissfully liberating that feeling is. It's delicious beyond description! We have finally Beat The Weeds. We won. They're toast. Fried. Done. DEAD! As we looked around the property, we realized that, after 16 years, we've finally reached a stable condition of this place that will allow us to actually enjoy it as never before in our history with it. What a great way to mark 16 years. 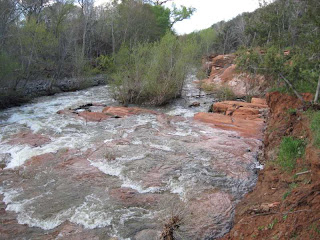 We took a nice hike April Fool's morning. It was along Wet Beaver Creek downstream from the 618 road. There are some nice red rock ledges and red bluffs there. The riparian is "old growth" and it's a delightful place. We had a little snack on a beautiful red bluff and enjoyed what we call The Dance Trail. No one ever hikes that trail, especially this time of year. It's one of the best kept secrets of this entire region.

We spent another four hours in Cottonwood. Paid our 2nd half property taxes and bought about $100 worth of groceries. We saved at least as much as that by astute shopping and couponing.

Yesterday was noteworthy in another arcane way. I had a HUGE breakthrough in one of my obsessions--the roasting of green chiles. All of my Southwestern Life, I've roasted green chiles on a grill. This involves painstakingly turning them one-by-one. Also, I have to hand select flat, straight chiles. Lately, the green chiles coming up out of Mexico haven't been flat or straight. They are twisted and knarly and quite literally impossible to roast on a grill. No way, no how. This has been a real vexation for me as I love roasting green chiles. Yes, I am obsessed with roasting green chiles. It's a fundamental part of my life.

So, here I have been deprived of my obsession as I can't even find a flat, straight chile to put atop a grill. What to do? Well, a combination of two things led to my breakthrough last night. First, Houn Dawg (Jeff, The Jon-E Handwarmer Kind) said he used a small propane torch to roast them one-by-one. These torches are generally used to thaw pipes or maybe sometimes solder a copper pipe. Next, I have always admired commercial rotary roasting drums. They roast 50 pounds of chiles at a whack. They're awesome and the envy of my eye. They use huge gobs of propane fed through giant flames as the drum passes by a pipeline of jet propelled fire.

Finally, the lightbulb went off. What if I used our huge weed burning torch? WOuld it work? First, I bought four pounds of the ugliest, most twisted green chiles I could get my hands on. Next, I set up a culinary grill atop two pieces of rebar perched on some white rocks. Then I backstopped this with some stucco lath and put the whole arrangement on bare ground beside our campfire pit. Then I laid out an array of homely chiles atop the grill grate. Finally, I sit the afterburner on the torch tip and had at it. When you apply gas to the torch tip, it truly sounds like a jet taking off on a runway. It's hugely loud and there's a frightful flame coming from the end of this torch tip. If used improperly, these things can be wildly dangerous to life and property.

Well, magic happened and I was able to roast 4 pounds of chiles in a heartbeat. Every little nook and cranny of the chiles was roasted to perfection. They were all blacked and blistered perfectly. It was an incredible sight to behold and really invigorating for a Chile Head like me. WOW--I would hardly believe my good fortune. Now my chile roasting days has been catapulted into a whole new realm. My head is spinning with all the possibilities. Now, I will even be able to roast pasilla peppers. Gee, I will be able to toast off entire masses of jalapenos in a veritable flash! WOW--this is rich stuff!

Life is good! Indeed. Have a great day and Many Cheers! jp
Posted by John Parsons at 8:49 AM