The Three Wheelers have 12 kids. 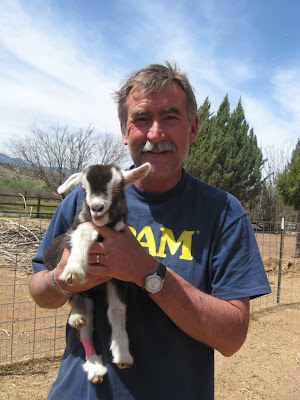 Our Dear Friends Kate, Brad and Josh have quite the little agricultural operation in a small, rural quasi village in the Verde Valley.  Sometimes they call it El Rancho Chivitos (Goat Ranch).  Brad started getting into chickens when Joshua was a mere 4 years old.  Josh had an egg route by the time he was six.  Josh started in 4-H as soon as he was age-eligible.  Since his very early youth, he's shown the chicken and then sheep.  He's quite the accomplished showman.

About four years ago, Brad decided to get into goats.  Since then, Brad, Kate and Josh have become honest-to-gosh goat experts.  Brad could (and should) write a book on goats.  I keep urging him to do so.  Meanwhile, Joshua is adding to his 4-H awards by showing goats.  I think he told us he has about 14 trophies now.  It's really amazing to watch him at the Verde Valley Fair.  He sure knows how to show off a goat or a chicken.

Well, The Three Wheelers decided to get a buck.  You may have read the story Josh wrote that we printed here a few days ago.  Meanwhile, four of their does became pregnant.  And wouldn't you know it, all four decided to kid within a two day period.  We went over yesterday to see the first four kids delivered Saturday.  Brad and Kate expected four more from the two remaining pregnant does--twins are normal from this breed of goat.  About a half hour after we left, the next goat delivered triplets!  Then we received an email from Brad this morning.  The last goat had FIVE kids!  This means The Three Wheelers DOUBLED the size of their goat herd in TWO DAYS!  They now have 24 goats.  Early Saturday they had only 12 goats.  Brad wrote quite a nice story about the arrival of the five goats.  It wouldn't be appropriate to print it here in the blog but if you want to read it, email me and I will forward it along for you.

Congratulations to The Three Wheelers--you are awesome and we offer you our heartfelt Cheers and wish you Many, many more Mighty Cheers!  Carry on!  J&S
Posted by John Parsons at 8:39 AM