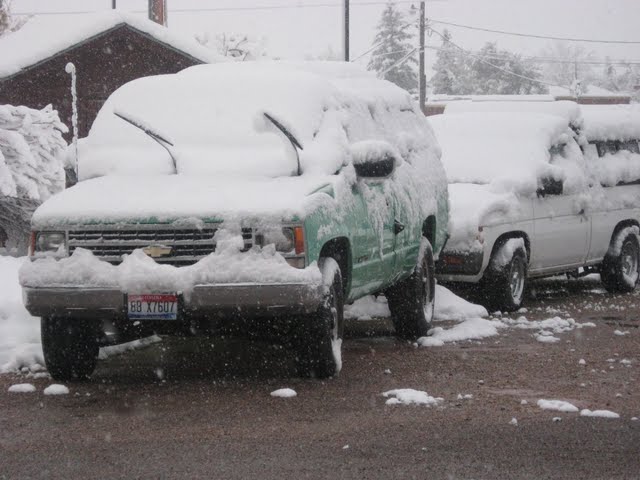 It was quite the road trip this time. WHEW! I am wiped out here on Friday morning. The cumulative affects of the trip hit home today. I will be writing a longer account of the road trip here later today.

OK, time to write about the trip.  We left the straw house unhitched so we could climb out of the valley OK.  The wind started picking up in Munds Park as we hitched up.  By Flagstaff, it was really howling.  Out north of town in the old beanfields, huge sheets of dust were whipping across the road.  When we topped the hill we looked out into the Little Colorado River valley and shuddered.  Giant dust clouds appeared everywhere.  Motorcyclists in the other lane were leaning 20-30 degrees into the wind to keep from being blown over.

We made a pit stop at Cameron and the truck door almost blew backwards when Susun opened it. Her prescription sunglasses were blown off her head and they took off across the parking lot. Luckily, she chased them down before they were broken. When she came out of the gas station, she couldn't close her door. I had to get out and close it and it was a struggle. Then I really had to fight to close my own door. I felt like I had just been sandblasted.

The wind was really buffeting our rig hard all the way to Page. Then it became a headwind as we turned west toward Kanab. It was all the truck could do to manage 50 mph into that headwind. Climbing the Kaibab Monocline, our speed dropped to 30 mph! We were so glad to get to Kanab and unhitch again.

We drove separate up through Long Valley and Panguitch. The Utah 20 hill was a piece of cake. We decided to rehitch in Beaver. Good thing. The dust clouds at the intersection of UT 20 and I-15 were amazing. It was quite windy in Beaver but the downtown area damped down the wind somewhat. I was wearing a lightweight short sleeve shirt and did not feel cold. I remember seeing a time & temperature sign that said 64 degrees. My, my, my, how quickly things changed.

Not far north of Beaver, we could both feel a noticeable chill in the truck cab. It started to rain and then the rainfall rate really increased. When the big trucks would pass, our windshield wipers couldn't clear the water. We often had zero visibility when the trucks passed. That's not good. As we approached Fillmore, we began to debate whether we should stop. As if by an omen, the rain instantly turned into snow right at the Fillmore offramp. I said, "To heck with this, we're outta here!" and dodged off the interstate.

It was snowing so heavily as we checked in we had to brush off the snow from our jackets before entering the room. The snowfall rate was easily 2 inches an hour.
We drove to the town's only grocery store and bought some finger food and found a cool pink snake for a buck and a quarter. The trucks were covered with snow again when we came out of the grocery. We almost spun out driving back to the motel.

We woke up to big gobs of snow on the vehicles. UGH! It took nearly an hour to clear them off. We could see that the snow didn't stick to Fillmore's streets so we thought we'd be OK heading north again. Also, I had a hunch that the worst of it was in the Fillmore-Cove Fort-Beaver hills. Turns out that was a correct hunch. As soon as we dropped off the Scipio hill, the snow was basically nothing. Soon the roads were dry and it was smooth sailing to Payson, South Gateway to the Belly of The Beast.

It was with a deep sense of fear and loathing that we again entered onto I-15 and headed north. I sent a two word text message to the Twitter account, "Cowboy up."
I felt like I was on a bronco that had just come out of the chute. Ahead loomed deep dark clouds and we knew we were driving into a lake affect snow storm.

Almost immediately north of Payson, the rain came and then turned off and on to snow practically all the way to Willard Bay--the North Gateway to the Belly of The Beast. At times, visibility dropped below a quarter mile. At times, sheets of rain, sleet and slushy snow obscured our vision. At times, the wipers couldn't clear the water fast enough. Of course, NO ONE slows down in Salt Lake City. Yesterday, I could barely glance into the rearview mirror--what I saw behind me scared the daylights out of me--a mass of congestion and speeding vehicles changing lanes like Shriner go-carts in a summer parade. I even got a tad dizzy and nauseous looking in the rear view mirror so I simply stopped looking and hoped for the best. Oddly, the insane drivers were rocketing around us so fast they left a nice gap in front of us. So, at least I felt comfortable with having enough space to stop if the need arose. It was almost 2 full hours to survive Salt Lake. Susun tells people it is four hours to drive that stretch. That's what it always feels like--four hours.

We were so relieved to get to Willard Bay. From there north, it's a piece of cake. The only other incident was just south of Pocatello when the wind blew over a stock trailer. Some old cowboy had two giant bulls in the old trailer. Somehow, the bulls survived and they were roaming the shoulder of the interstate. The cops hadn't got there yet and some other old cowboy was standing smack in the middle of the interstate trying to get traffic to slow down. It's a miracle all the speeding semis and speed-obsessed drivers didn't wind up in a mass pileup there. That ain't no bull.

It started spitting snow north of Pocatello but felt like nothing compared to what we had already survived. Consequently, the remainder of the drive home was downright relaxing.

Everything went like clockwork in terms of opening up the house and getting everything restarted. The city guy showed up within minutes and we had two walkie-talkies ready. He turned on the water while I stood in the basement to check for leaks. All A-OK. We bled the plumbing and filled the water heater, enjoyed hot showers and a great Happy Hour and dinner. Whew!

Last night I had a couple of nightmares about the sea of speeding vehicles in my rear view mirror. Gads, that was ugly! This morning I felt like the full toll of that trip. It's a good thing we won't be traveling that route again until November. It's going to take us that long to even think it might be a fun thing to do. Right now, we're just danged glad to be here at home safe and happy. Bone tired--but safe!

Cheers, jp
Posted by John Parsons at 9:00 AM