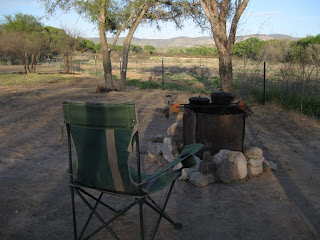 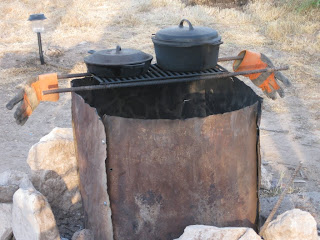 Got up at 4:30 this morning so the coffee was done at 5 am sharp! Our newspaper delivery person is really good--the news was lying in front of the house at 4:30, too. Mostly, the Arizona Republic isn't much worth reading. Too many depressing stories about local politics and so forth. But it's something to stare at while waiting for the caffeine to kick in.

Dear Friend & LBR Gary W. sent along a link with some great photos of the Iceland volcano. Click here to see about 30 great pictures. As some of you know, I have a certain fondness for volcanoes. We've spent hours talking about them on our weather blogs. Oddly, I haven't even written a single post on this particular volcano. This lack of verbiage has even me perplexed. Normally, I'd be chattering like a crazed squirrel about this volcano. I wonder why this one does nothing to get me amped up? Actually, I think I know. Even though the volcano has been wrecking havoc with the airlines, I honestly don't think it's ash plume has gone high enough into the atmosphere to affect weather.
That's really all I care about as far as volcanoes are concerned. Are they going to affect the weather? With this one, I doubt it. Therefore, I haven't written anything about it, until now anyway. The photos are excellent and I am sure you will enjoy looking at them. Thanks, Gary!

We enjoyed a nice hike up Blue Grade yesterday morning. We were 4-5 minutes slower on the uphill portion than the previous day but still finished the 3+ mile round trip in 1:04. A 3 mph pace for people our age rates at least a B+.

We had a nice talk with Debby up in Idaho Falls. We will be helping her today as a an important deadline looms tomorrow. We put in a couple of hours on Carrie's Art Bench project, too. (She and her husband are currently marooned in COlumbus, Montana. Long story.) We sent off a long note to Mike about the Chile Cookoff in July. We met with Rex from the NPS and said we will volunteer for them on our next trip down. Not enough time left this trip.

Meanwhile, we prepared to burn yesterday but Fire Dispatch said we couldn't do so.
We went to Cottonwood instead. Cottonwood did its usual hypnosis number on both of us and we fell into a deep slumber upon our return. Poof, the day was pretty much gone. Upon awakening, it was already campfire time again.

Last night we finally got around to doing some limited cooking atop the chimney-style fire shield. The skillet held two pork chops that were mostly frozen when they entered the cast iron and came out mostly cooked. The big pot held six frozen sausages that were perfectly thawed after their prolonged exposure. On our next trip down here, I really want to get feng shui with cooking on our evening fire. Might as well be doing something productive.

This morning my top priority is to get my portion of Carrie's project up and running. I need to get the slideshow done of the finalist designs. I also need to build a secure site to house their resumes and applications. There's so much personal information on those documents, we simply can't allow them to be accessible to the general public. I am learning how to use one of Google's little known blog features wherein you can build a "by invitation only" blog. So far, it seems to be working quite well--much better than I ever expected.

This blogging platform is so awesome. Even though I know a LOT about the various "tips & tricks" of Google's blogger platform, I sometimes feel like I am only touching the tip of the iceberg with this thing. There is such incredible functionality in it. Getting involved in the "invitation only" thing has really helped open my eyes to a whole new aspect of blogger.