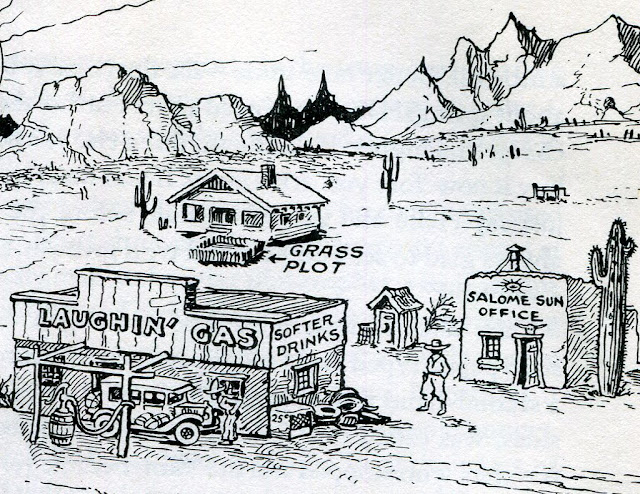 I go down a lot of Rabbit Holes, far more than I need to and sometimes far more than I want to.  And sometimes I go down too deep in them there hare holes...so deep I can't even see light at the top of the hole.  Almost always I can beat The Rabbit and come back with good stuff.

But today The Rabbit won and I am pulling out with nothing much to show for a couple of weeks and seemingly countless hours deep down a dark, damp, dank hole.

Yep, it's the story of Dick Wick Hall and Salome, Arizona, and "That Salome Frog" and all of that amore more.  If ever there was a wall at the end of a bottomless Rabbit Hole, I sure hit that wall on this foray underground.

Part of me doesn't want to admit defeat, especially da feet of the rabbit.  They're supposed to be good luck, right?  But the bottom line is "ya hafta know when to hold 'em and when to fold 'em" and when to cut your losses and RUN!  Well, we're up and outta that Salome Hole and we're running fast and far away.

In some ways it's been fun and in other ways not so much.  I found a lot of good stuff but can't really use much of anything because it would be all out of context in a helter skelter meaningless mish mash.  And it just wouldn't be worth the time and trouble to mess with.

Dick Wick's story is filled overflowing with contradictions, conflicting facts, obscure, dubious sources, questions that can't be answered and sources that can't be found.  Just when I thought I was "on to something," I'd get smacked back down with the reality I was on a false, fleeting tangent to nowhere.

And then there's the Dark Side.  Sure enuf I found a Dark Side to Dick Wick, a side almost no one knows and if they do know it, they don't want to admit it.  Everybody just wants to let sleeping dogs lie and move along.  That's all well and good I suppose.  You can get in trouble if you wake up the wrong sleeping dog!

So, each night I lay awake pondering how I could integrate Dick Wick's Dark Side with hisw Light Side and somehow make it work.  Well, there's really no way to have your cake and eat it, too, in his story.  And then there's the fact that everybody LOVES Dick Wick and his Frog and his silly stories.  Dick Wick is kind of an Arizona institution whose "Salmon Sun" debuted 100 years ago.

SO, in summary,, as I tried to peer into the dim recesses of that deep Rabbit Hole, the realization finally dawned that I was on a false and inappropriate journey to nowhere.

So I climbed out of that hole today and I'm not going back.  It's best to leave Dick Wick Hall's memory and legacy "as is" and not rattle those skeletons in the closet.  Just let it be, as some famous English boy band once sang.

So that's all the story you're gonna get out of me for nearly two weeks worth of hard work.  Now we'll move on to the next Rabbit Hole on down the line and try to keep it simple.