Have you ever heard that phrase?  A variation is an accusation such as "You don't know beans."  Well, I know a little bit about beans but I could easily say "I don't know beans" and be more right than wrong.

This morning I am trying to know a little bit more about beans than I knew yesterday.  Of course, it doesn't take much to increase one's knowing of beans since the internet is full of beans, pun intended.  So-called Navy Beans have long been a favorite legume of mine.

Yesterday I "rediscovered" a lost casserole book we purchased in Livingston, Montana, last October.  It has 2,000 recipes all contributed by Home Economics teachers in the mid-60's.  As you might suspect, most of those 2,000 recipes are full of Cheese Whiz, Velveeta, butter, bacon and all sorts of other yummy fat.  Some of the recipes aren't even casseroles.  I found one last night which sure sounded like a "pot-o-beans" recipe and that's why I am deep down the Rabbit Hole of Navy Beans.

First off, how did they get their name?  Navy Beans have been around for about 5,000 years and were supposedly one of the very first beans to be "domesticated." I'm not sure how you domesticate a bean.  Do you teach it table manners...or what?

Despite that little white bean's lengthy pedigree, it apparently didn't merit a name of its own until The U.S. Navy began serving the beans to sailors aboard ships at least from the mid-1850's and probably long before.  Those tiny bean's became rather ubiquitous aboard ship and it wasn't long before the "Navy" moniker was permanently affixed to the beans.

In our casual research this morning, we found one article which asserts Navy (and other) Beans played an important role in creating the Industrial Revolution! "In fact, beans may have driven the industrial revolution as much as the increasing use of fossil fuels. As a cheap and abundant food resource, beans provided the impoverished workers with enough nutrients and energy to get through the long, grueling work days."

That assertion could well point to why small white beans became such a staple food aboard ship.  They are easy to cook and don't lose their shape or break apart.  They are easy to store and provide some of the most protein per serving of any dried beans.  The little beans pair exceptionally well with salt pork--a meat unit that could be easily carried aboard ship for long periods of time.

All-in-all, it now makes some degree of sense to me why and how those beans could come to be called Navy Beans.  I happen to love Navy Beans for the same reasons the U.S. Navy must have loved them--ease of cooking and a natural affinity for any sort of pork product.  I've used ham hocks. ham bones, salt pork and even bacon to flavor my bean pot.

I'm looking forward to using this mid-60's "Old-Fashioned Baked Beans" recipe from Rogue River, Oregon, just about as soon as I can get all the ingredients together.  Knowing beans just a little bit better will help my imagination wander while I savor a bowl of Navy Beans. 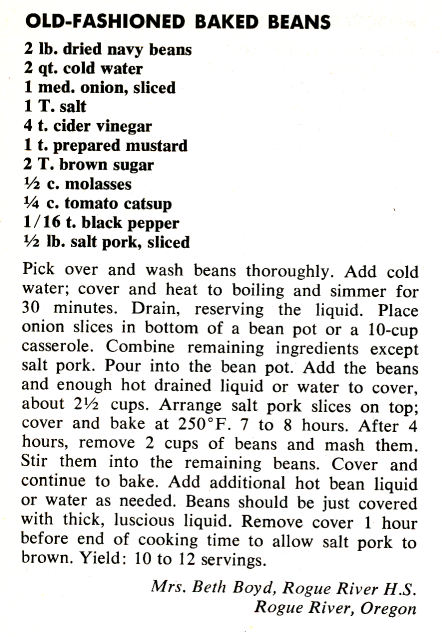 Random info that is fun to read. I learned something new today.