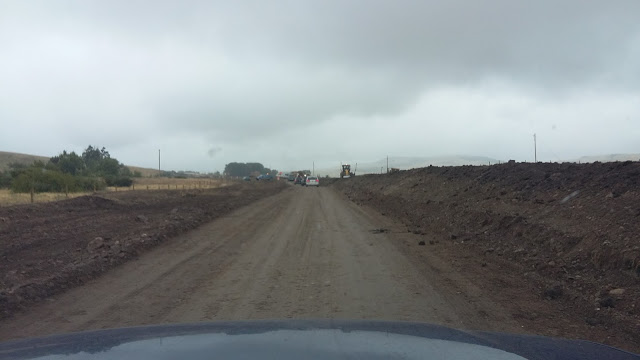 Yes, it truly was The Weirdest Of The Weird.It was THE Weirdest Construciton Site I have ever seen in my entire lifetime. Bar None. And this goes back to the 1950's, Dear Friends.  I have never seen a construction area this weird in ALL my Life, not even  in Sonoran, Mexico, and that says it all right there.  I personally worked weird construction sites in the 1960's.  They were nothing compared to today. I thought I saw the Weirdest of The Weirdest in Sonora back in the 90's.But NO!  The Blackfeet Nation surpassed The Weirdest of The Weird today.  We went through a construction site designed by some rogue engineer on drugs. Hardly half way through the most weirdest of the weird there was a sign that said “End Road Work” and then it got worse.  A LOT Worse.   Oh, my gosh, I was honestly on the edge of my driving abilities going through that ridiculous construction zone.   Blackfeet Men were driving giant machines in ways I don't even want to attempt to describe.  The speed and sheer terror of these machines brought me right down to my most primal level.  I determined I was gonna get outta there no matter what those guys threw at me!


Yikes!  Yes, it was THAT bad!  We made it OK but it was white knuckle all the way.  When I got to the other side of their gauntlet, I exhaled like you read about.