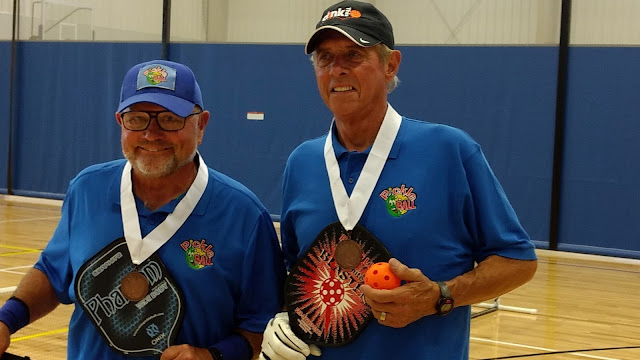 Behind that smile on July 8th after winning a Bronze Medal in the SE Idaho Senior Games is acute left knee pain.  OUCH!  I injured the MCL of the left knee that day.  Foolishly, I masked the pain with some NSAID RX meds and then played in the July 28 Star Valley Tournament.  BAD PLAN!

Anyway, Dick (above right) and I got smoked in Star Valley.  But it  was all because of me and my knee.  I couldn't play and I should not have played and it was extremely foolish of me to have played.

So, after the debacle at Star Valley, I decided to give my left knee a "Healing R&R Break".  I didn't touch a pickleball paddle for 28+ days.

Only until today did I dare pick up the paddle again.  First, however, I checked in with my Doctor twice to make sure everything in the knee would be feng shui.    My Doc and I discussed the RX and I agreed to continue taking it.  It's a once-a-day NSAID called Meloxicam and it's only 15 mg.  But it sure helps.

Anyway, I thought about playing last Sunday but pushed it back to Friday, August 25, 2017.  I scheduled a paid lesson with our local Pro, Austen Felton.

I showed up at High Noon today and Austen and I worked in private for an hour before  anyone else even came through the gym door.  I told Austen I wanted to "Begin From Square One" and asked him to treat me as a rank beginner.

It was a truly refreshing and delightful coaching experience and Austen taught me a lot about how to improve all aspects of my pickleball play.  He is such a great teacher  Austen ROX!

Then after an hour of coaching, I faced off with The Ladies!  They are so awesome and so aggressive and so addicted to this sport.  When they come at you, they don't cut you any slack whatsoever.  If there's any way to make a point on you, they will find it and they will do it and then they will DANCE and Celebrate and hoot and holler and high five!  YEAH!  They LOVE IT when they stuff a point in your face!

So, Kitty and I squared off with Annette and Donna (A&D).  A&D just flat stuffed us two games in a row.  No mercy, no remorse.  They were dancing around the court like they were on Dancing With The Stars!

So, then we decided to switch pards and equal it out a little bit.  Donna and I then matched up against Kitty and Annette. (K&A).  K&A were convinced they could smoke us into oblivion and they danged near proceeded to do so in the first game of "Best of Three".

But that's when all my dormant pickleball skills came back to roost and we narrowly lost 11-9.  Then in Game #2, Donna and I fell behind 9-2 and somehow we found ourselves and won 11-9, going on a 9-0 run

And then it came down to Game 3 of Best of Three.  That's when the pedal really hit the metal and K&A were playing their hottest, bestest game.  Somehow, Donna and I got up on them 9-5 but they came storming back and fought us three serve sides at 10-9.

And then they got another point and tied it up at 10-10.  Luckily, we broke  their serve and got the ball back.  Donna served first and with a deft return put us up 11-10.

And then it was my turn.  ELEVEN-TEN-TWO.  I called out our score and stared across the net there in the APPLE Gym and then I closed my eyes and bowed my head.  I asked The Pickleball Gods to have mercy on me and allow Donna and I to win.

I lofted the serve high, long and far...and it faked out Kitty and she hit her return out of bounds..  OH, HOW SWEET it was after being gone 28 days from The Game I Love.

You have NO idea how much that moment meant to me today.

Ok....I will pad my hand and Picklball paddle to Paddle up and play...now that the Habitat for Humanity fun raiser ...for now was a success. ..