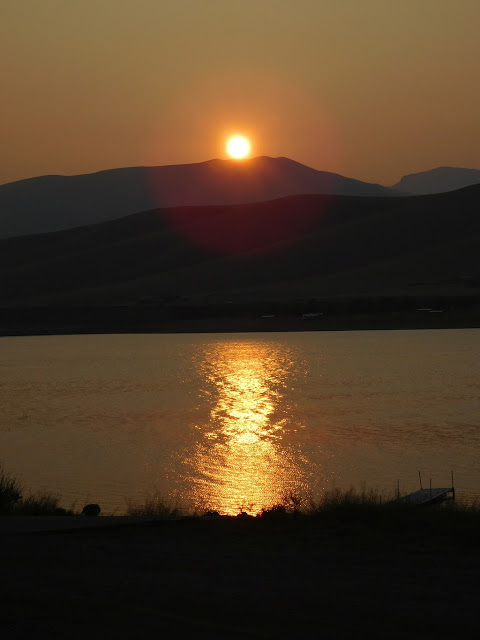 'Nother Red Sun kinda morning...Makes me wonder what's gonna happen if all this smoke is still here in 11 days...which it probably will be because that's the way it goes during a Northern Rockies fire season.  Anyway, all those Eclipse Pilgrims supposedly coming from far and wide will be sorely disappointed to see their event shrouded in a pall of particulates.  We've never really succumbed to the Eclipse Excitement. Lotsa folks are going ga-ga over two minute totality.  But all this smoke sure does make me wonder....


This campground is managed by the Bureau of Reclamation.  Being an upstanding federal bureaucracy, BuRec put up a really tall and upstanding flagpole nearby.  And, naturally, BuRec followed the rules and put in a really big light at the base of the pole so Old Glory can fly right and proper all night long.  It's actually one of the best night  lights for a flag I've seen in a really long time.  Most people and outfits skip on their night lighting for their flags.  I got up a couple of times during the night and sat in the darkness watching the Stars & Stripes flutter in the breezy dark air.  As growing turmoil continue to rock America's collective boat, it was a welcome comforting sight to see and reminded me of the timeless, sacred lyrics from our National Anthem.  We are proud of our Country and stand beside her through thick and thin.  We pray and trust that we will make it through these trying times together stronger, better and more united than ever. Those are the kind of thoughts a geezer guy has in the middle of the night while watching a well lit flag strut its stuff at Camp Fortunate.


Seeing the flag fly last night also made me think of the flag flying here at Camp Fortunate in 1805.  Lewis & Clark were really good about flying the flag at each camp.  Heck, I don't even know how many stars and stripes would have been on an 1805 flag.  And speaking of which, I don't think our National Anthem had even been written back then.

(Editor's Note added later: There were actually 17 States in 1805 but the official US Flag has 15 Stars and stripes.  Here's the link for more info: http://www.lewis-clark.org/article/665  And here's the photo of a typical US Flag in 1805.  The Star Spangled Banner National Anthem lyrics were written in 1814.)

Speaking of Camp Fortunate, this is where the Lewis & Clark expedition parted ways with their boats—boats that had paddled, dragged, pulled and portaged all the way from St. Louis.  Here is where they set foot almost due west to climb high onto Lemhi Pass and cross the Continental Divide.  We went to Lemhi Pass back in 2005 during the Bicentennial Hoopla of Lewis & Clark.  It's a steep, steep road up to that pass and danged near burned out the clutch on our little Suzuki Samurai.  But it's a worthy spot for a pilgramage to stand in their footsteps and stare at wave upon wave of mountain ridges disappearing into the far western horizon.  From Lemhi Pass, the expedition would drop down into the Lemhi River watershed and make their way to camp for a few days at what is now Salmon, Idaho. For two Lewis & Clark junkies, it's wonderful being here at Camp Fortunate.


We're happy to be going home today.  We originally thought we'd stay out much longer—possibly even skipping the eclipse.  But we're both glad to be 125 miles from home.  It's been a great trip and now it's time to turn a page and start a new chapter in the book of our 2017 Idaho Season.