Eclipse made me money 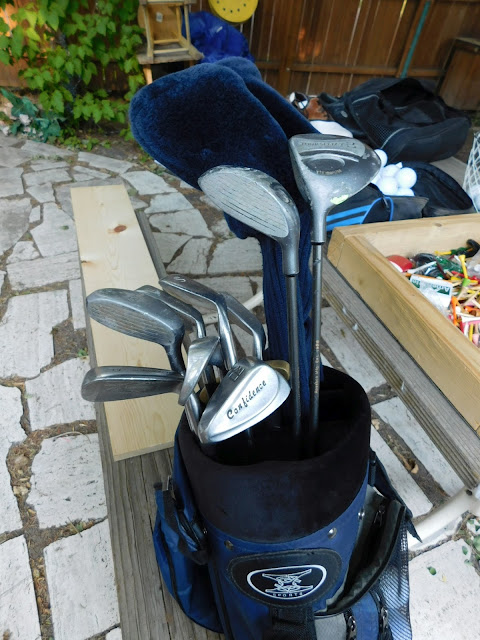 Who'd a thunk that the Eclipse could make me money?  But it did.  Here's how.  Many years ago, I got conned into buying an ancient set of left hand golf clubs.  Well, one thing led to another and I began to play golf again...albeit only on the local "par 3" kiddie course for $3 a round.  I upgraded my clubs several times and added all sorts of accessories.  By and by, I had a rather large assortment of golf flotsam and jetsam.  The inventory included 19 clubs and two putters with two bags, a cart and other items too numerous to mention.

Well, I can't play golf any more because of the bad left shoulder.  Pickleball, yes.  Golf, no.  So, when we returned from Arizona in early May, I put all my left hand golf clubs and stuff up for sale on Craigs List.  I've had great success with Craigs List but not this time.  NOBODY inquired and those who did were air heads.

How do I know one of them was a total air head?  Well, I am in Idaho Falls and this air head was in Nampa, 300 miles west of here and he said he'd be right over.  Um...not so much.  Once the air head found out he'd have to travel 300 miles, he rather quickly changed his mind, and hopefully his direction, too.

Quite frankly, I was getting pretty discouraged by the lack of interest in my golf stuff.  And then, lo and behold this morning someone inquired about them and wanted pictures.  So, I dutifully took photos and sent them along.  BAM! POOF! SLAM!  The buyer showed up almost immediately and peeled off the cash asking price for everything.  Naturally, I assumed he was local and asked if he'd ever played the Sand Creek Junior's Course, as it is more properly known.

He kinda looked confused and then said, "No, I'm from Minnesota."  So, I asked, "Are you out here for the Eclipse?"  Yep, he sure was.  Showed up yesterday and is leaving right after the eclipse.

So, you see, that's how the Eclipse made me some money.  If that guy hadn't shown up, I'd probably be sitting on that golf stuff for years and years.  It simply wasn't going to sell out here where the potatoes roam.

Consequently, my attitude about the eclipse improved dramatically!
Posted by John Parsons at 1:02 PM