It was five years ago today when a 12-year-old changed our lives. The young delinquent male broke out most of the windows of our straw house here in Rimrock.

When Dear Friend Brad W. arrived to assess the damage, it was a seen of bleak devastation.  Brad called me at my office in Idaho Falls that day to deliver the bad news.  I will never forget the feeling of listening to his calm voice recount the situation.  All I could keep saying was, "Well, everything happens for a positive purpose."  That's our mantra through thick and thin.

While Brad tried to stabilize the house, we hurriedly packed up and hit the road south, using some accrued vacation time from my position as Director of The Eastern Idaho Retired & Senior Volunteer Program (RSVP).

We sold our straw house and the land around it in 2006 to a developer.  He would only take the straw house if we carried a note for its portion of the purchase cost.  In 2009, he couldn't pay off the three-year note and voluntarily signed the house back to us without having to go into foreclosure.

Susun was heartsick when she heard the news.

We really didn't know what to do with the place since we had been living and working a full-time paid job since 2007 in Idaho Falls.  I managed a roster of well over 700 volunteers who served at far more than 100 organizations in a 19,000 square mile area of Eastern Idaho.  One of the highlights of my job was working with 16 Senior Center spread far and wide in some of the most beautiful country on earth.

As the mileposts ticked past on our way south, Susun and I debated what to do with the place.  Our first inclination was to dump it into arguably the weakest housing market in Arizona history.  As you recall, 2009 was the pits of the housing bust and the depths of the recession.

When we pulled up alongside the home we built with our own hands, a feeling of helplessness surged through our spirits.  Broken glass was strewn everywhere.  The land itself was an unbroken sea of huge tumbleweeds.  To say it was bleak was a colossal understatement.

We set up a small camping tent inside the house and unlimbered two camp chairs and tried to camp in the shell of what was once a happy home.  The day after we arrived, we went to Brad's Place for lunch.  When we returned, the 12-year-old had returned and broke out more windows and scatter large glass shards all over our tent, sleeping bags and chairs.

We stood staring at the scene in utter disbelief.

And thus began a chain of events that led us to where we are today--sitting in our Happy Home telling you a story about all these circumstances that began five years ago today.

Luckily for us (maybe not for him), the 12-year-old went on to bigger crimes and eventually got incarcerated in Arizona's Adobe Mountain juvenile facility.  At least the primary threat was rather quickly removed from our neighborhood.

Meanwhile, somehow the circumstances brought out The Best in both of us.  we worked feverishly day-in and day-out, non-stop everyday for almost two months.  In the process, we coined a new name for our place--2nd Chance Ranch.

Luckily, my employer figured out a creative way to keep me employed and paid so I didn't lose my job.  We took only two days off during that time--Thanksgiving and Christmas Day.

Looking back, the amount of work we had to do to this place was epic.  Frankly, five years later I look around and wonder where and how we got all that relentless energy.  Each day we both worked from sunup to sundown, often not even breaking for lunch.  Some sort of passionate zeal overtook our Spirits and we just worked.  Period.

My mantra during that time was "think like a 12-year-old."  We successfully armored-up our house so that any garden variety juvenile delinquent couldn't damage it.  Now if an criminal adult showed up with a cutting torch and a battering ram, that would be different. But we figured adult criminals would have bigger fish to fry than vandalizing a straw house.  So, we planned every move to thwart the mind of a 12-year-old.

Five years later, we are happy to say it has worked.  All of our armoring efforts truly paid off.  The place has been untouched, unharmed and intact each of the five times we have returned since those fateful days five years ago.

When we drove north after Christmas five years ago, we got caught in a blizzard at Nephi, Utah.  We holed up in the Safari Motel to ride it out and finally arrived back in Idaho Falls New Year's Eve 2009.

Meanwhile, there had been a sea change at my workplace and on the day we arrived back in River City we decided to retire from the job and become Snowbirds, keeping our straw house as a place to roost from November through April each year. Meanwhile, we began this blog the next day, January 1, 2010, to document the changes we knew would lie ahead in our lives.

As time has passed over the past five years, we can now look back and see the vandalism of our place as a blessing-in-disguise.  The event forced our hand, so to speak.  it forced us to "stand & deliver" for the things we cared about.  It forced us to make decisions that have turned out to be wonderful and life-changing.

We love our little Happy Home here cozied up next to Montezuma Well National Monument.

Indeed, everything happens for a positive purpose! 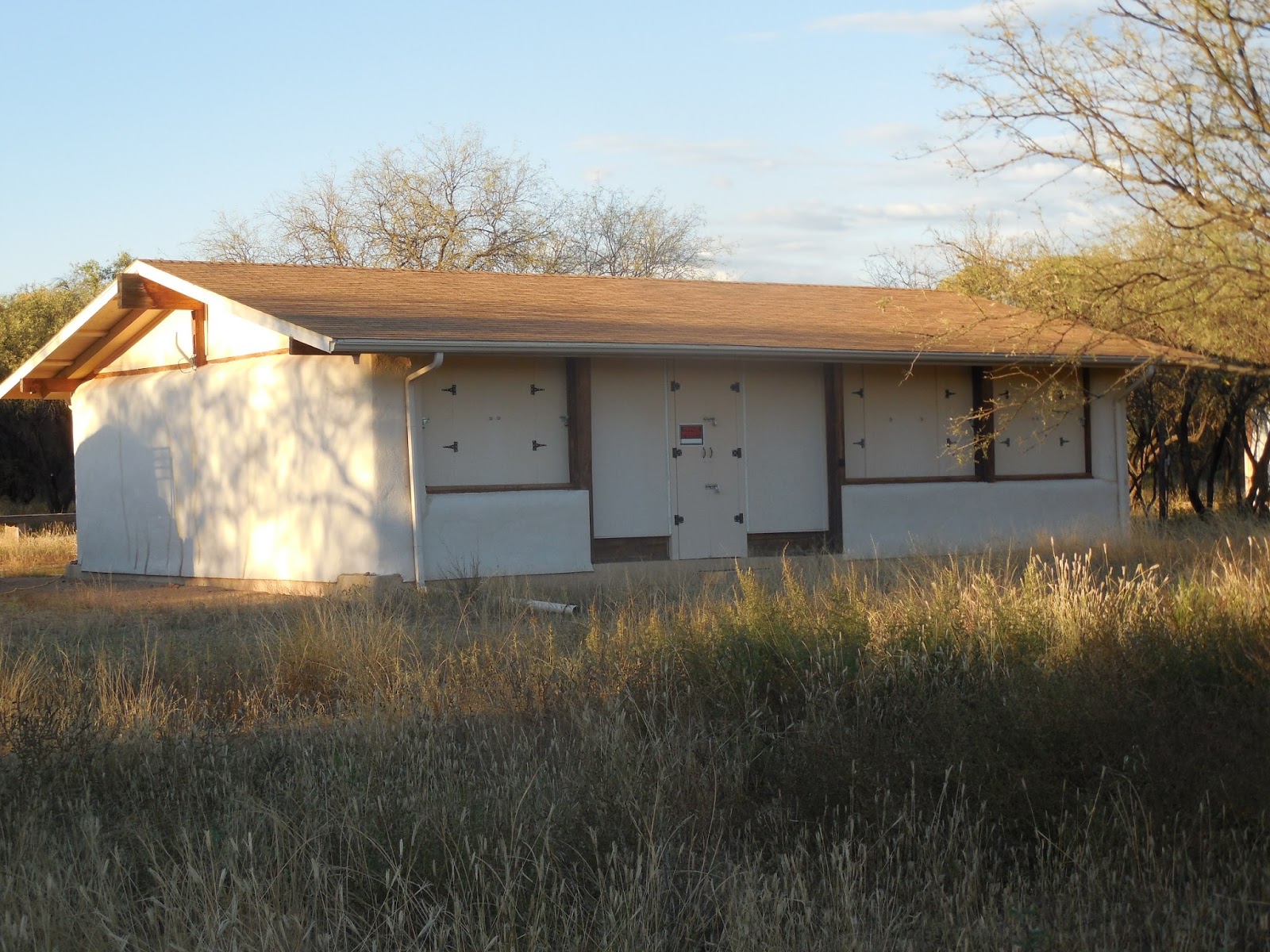 Here's what the place looks like now when we arrive after six months in Idaho.  We lock up the shutters even if we're driving only two miles to the Post Office.  The place is ALWAYS shuttered and locked if we are away for any reason.

For those who haven't seen the photo album of the construction of our straw house, here it is:

http://www.livesimplecaremuch.com/2010/11/straw-house-slide-show.html
Posted by Johnny Montezuma at 8:29 AM