Yesterday I was working out on the treadmill at the gym.  Lo and behold, the big screen TV's were all tuned to The Kentucky Derby.  As chance would have it my later afternoon treadmill session coincided perfectly with watching the 140th running of The Derby.  I actually enjoyed watching the hoopla and the actual race itself.  It brought back some memories.

I went to The Kentucky Derby once in 1960 just before I graduated from Saint Lawrence grade school.  My Mom was all excited weeks beforehand.  Even 54 years ago, the Fashionista Thing infected the females who attended The Derby.  Mom had to have the "right" dress and, of course, the "right" hat.  Back then, only a fraction of yesterday's 164,000 people attended the event.

We actually has seats in that old, classic grandstand. Today, seats in the old grandstand are only affordable for the very wealthy.  Top dollar yesterday was almost $10,000 for the "right" seats.

I was even forced to wear a tie!  Dad was dressed his best, too.  Since everyone was drinking mint juleps or sipping some sort of distilled spirit, my Mom had to partake, too.  After all it was the fashionable thing to do.  Mom wasn't a drinker so half on one drink pretty well made her tipsy.

Dad took me to the bettor's window where he placed the obligatory bet on some horse whose name in lost in the dust bin of memory.  Back in those days, people could actually get fairly close to the regal animals and the midget men who piloted them around the track.

Even "back in the day," The Kentucky Derby" was the place to go "see and be seen."  This morning, our newspaper was late coming to the front doorstep so I once again roamed the internet looking for "fun stuff."  I stumbled onto an  article about "Kentucky Derby Hats" in the San Francisco Chronicle and thus began searching for even more such articles.  Below you will find links to many, many wild, outlandish, goofy and strange Derby Hats.  Apparently, "high end hats" are selling for upwards of $2,000 each.  Amazon has a pretty nice selection for under $50 each.

"Back In The Day" only women wore Derby Hats.  Now, men are in on the Derby Hat Trick as well.

For some inexplicable reason, I was never smitten with The Kentucky Derby like so many other Midwesterners seem to be.  It was an interesting and obviously unforgettable experience but it was "one and done" for this kiddo.

OK, without further ado (or even a Derby trumpet fanfare) here's the hats: 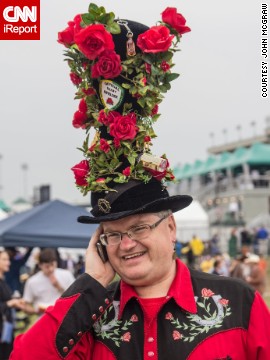 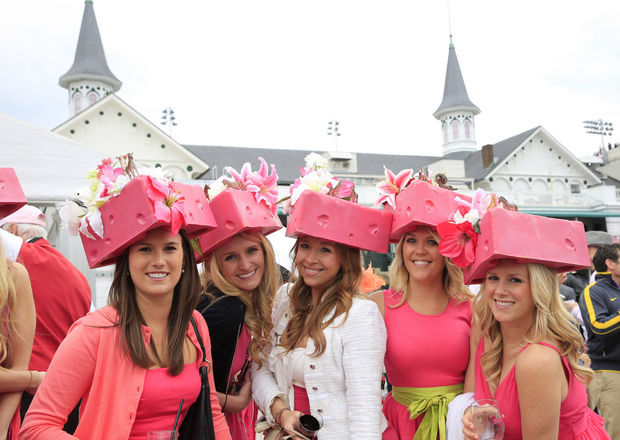 Oh geez. I LOVE LOVE LOVE those southern ladies and the hats! seems like images from another era. What fun, John.