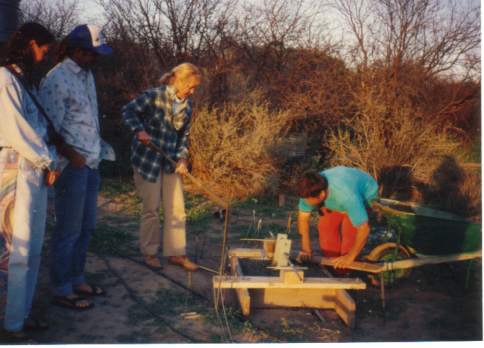 April Fool Day 1994 we did the first piece of actual work on what would become our Straw House Home.  This morning and throughout the past 20 years, we have given "Forever Thanks" to all of our Dear Friends who helped us create and build the place.

On February 20, 1993, we were flooded out of Susun's Cottonwood home on the Verde River.  A couple of days later, we moved our tiny 8-foot travel trailer nicknamed "The Cave" to our land next to Montezuma Well National Monument.  It would be our home for the next 18 months.

As soon as we settled into The Cave in late February, we began scheming and dreaming about building a straw house on the land beside the west end of The Well. Nary a day went by without some sort of discussion, planning, training, or materials acquisition for what would become our straw house. Dear Friend Brad W. was our co-conspirator throughout the whole process.  Without his involvement, it's unlikely we could have ever pulled off this project.

So, by the time April Fool Day 20 years ago arrived, we were well trained, prepared and equipped to begin the project.  Yes, we had our Yavapai County building permit in hand--the very first straw house building permit the county had ever issued.

Dear Friend Wayne Ranney was on hand to witness our first tiny efforts to construct the house that day.  We dug a single hole in the ground.  We put up some forms and arrange some rebar and poured hand-mixed concrete to create the northeast cornerstone foundation for the house.  We had a little ceremony and sealed in some rocks from The Grand Canyon that held special meaning to us.

Each of the four cornerstone hold rocks of special meaning from special places. We set them in the concrete so a little portion of them shows on top of those four cornerstones.  Looking at them over the past 20 years has (and continues) to bring special smiles and thoughts to our Spirits.

Sweetie Susun was the hardest and most energetic worker.  Building our home together has given us a special bond.  However, building our straw house was all about Friendship.  Even back in 1994, we lost count of the number of people, Dear Friends and Total Strangers, who helped us building the place.  Dexter Allen was our Main Man, of course.  Without Dexter, we doubt if we could have ever finished the job.  All-in-all, we're guessing perhaps 100 people helped us build the place.

The outpouring of support and Friendship was touching, inspirational and continues to have a special place in our hearts.  We often look at an aspect of the straw house and think fond thoughts of those folks who helped make that aspect possible.  When it finally came time to stucco the structure, more than 40 Friends and strangers turned out on various days to volunteer to help complete that part of the process.  The construction of the house actually went very quickly.  We had a good, solid plan and followed it to the letter.  We knew what we had to do to "git 'er dun" and we did it quickly and well.  Of course, without the energy of all of our Dear Friends and so many strangers, it certainly would not have gone so quickly or perhaps have been done so well.

However, at least when someone showed up to help, we could immediately give them a meaningful task in which they could take both ownership and pride of accomplishment.  That was a very big key to building the house.  The house was "livable" by the fall season of 1994.  Granted, it had a dirt floor and lots of other stuff that needed to be done.  But at least we would get out of our travel trailer and into a real structure.  We lived "off-the-grid" in the house until Spring 2006.

Back in 2005, Susun decided we were moving to Idaho.  So, in early 2006, we sold the straw house and our adjoining vacant building lots to a developer.  He had plans to make a southwest theme development in that area.  His main goal was to use the vacant land but, of course, we had to sell the house with the land.  Luckily, we asked for us to "tote the note" on the house.  When the recession came, he gave the house back to us three years later in the spring of 2009. 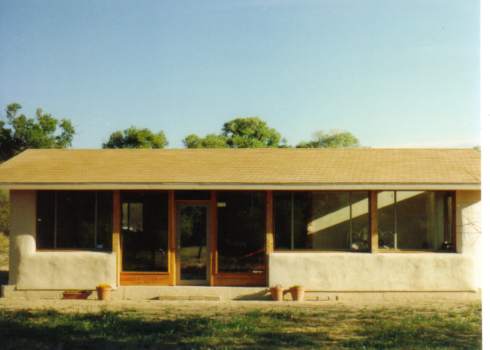 On Halloween 2009, a juvenile badly vandalized the house.  Dear Friend Brad W. called us in Idaho Falls to report the sad news that most of our windows had been broken out.  We will forever remember pausing to digest the news and then saying, "Well, everything happens for a purpose, Brad, and this is no exception.  Something good will come from it."

At the time, we were working a paid job in Idaho Falls as Director of The Eastern Idaho Retired and Senior Volunteeer Program.  We immediately took some time off and drove down to Rimrock, to assess the damage.  At first we thought we'd simply sell the place and move on in life.  But then the magical allure of our straw house and Montezuma Well once again reached into our hearts and beckoned us back.  As we sat amid the tumble weed jungle beside of our first campfire, we held hands and decided to rehabilitate the place and keep it.

It took six weeks of really hard work to make amends for the vandalism and fix up all the other stuff that had fallen into disarray during the previous three years.  Luckily, our employer cut us some major slack and allowed us to do what needed to be done.  We finished up everything just in time to return to Idaho Falls for New Year's Eve 2009.

We knew we faced some tumultuous changes ahead and we began this blog the very next day--New Year's Day 2010--to record all those changes.  By February 2010, we knew the "die was cast" and put in our two week notice.  We arrived back at what we now call "Second Chance Ranch" in early March 2010 and the rest is history.  We've been spending six months each winter in our beloved straw house.

Our home holds special meaning for us in ways words can't really describe.  We and our home have been through thick and thin together.  We shared the Good Times and, well...other times, too.  The walls so finely plastered by Dear Friend Dean-o have heard much laughter and, yes, even some tears.

We give Thanks for our Home and for our Dear Friends who made it possible!  May we all enjoy many more Happy Years together! 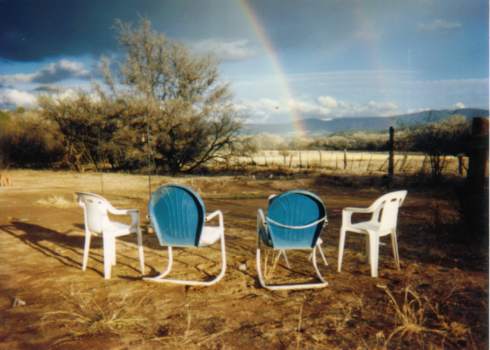