Ol' Sol is acting up.  The Big Question is where and how far south will the Aurora be seen tonight? Who's gonna get lucky?  Chance are a big chunk of Idaho might be able to see some auroral activity.  As of this morning, it's now looking less likely that the aurora will make a rare appearance in Arizona.

The last time we personally saw the aurora this far south was in December 1992 at the Dugas Road exit on I-17.  It takes a huge whopper of a solar storm to send the colorful display down into the Southwest.

Last night we read this snippet and got excited about the possibilities:

"Federal space weather forecaster Joe Kunches said the sun shot out a strong solar flare late Tuesday, which should arrive at Earth early Thursday. It should shake up Earth's magnetic field and expand the Aurora Borealis south, possibly as far south as Colorado and central Illinois. He said best viewing would probably be Thursday evening, weather permitting
.
The University of Alaska's Geophysical Institute predicts much of Canada and the northern fringes of the U.S. should see the northern lights. Chicago, Boston, Cleveland, Seattle and Des Moines might see the shimmering colors low on the horizon." 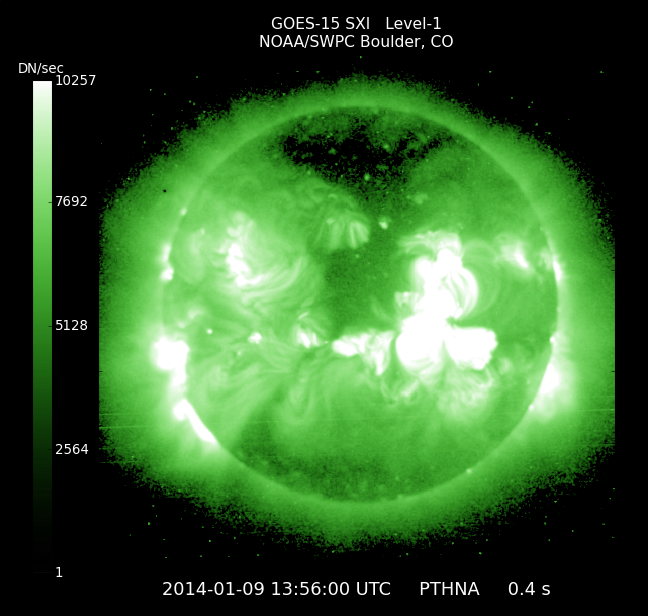 In any event, Space Weather reports NOAA forecasters estimate a 90% chance of geomagnetic storms on Jan. 9th when a CME is expected to hit Earth's magnetic field. The speed of the solar wind around Earth could spike to 700 km/s (1.6 million mph) shortly after the impact, sharply compressing Earth's magnetosphere. High-latitude sky watchers should be alert for auroras.

The source of the incoming CME is AR1944, one of the largest sunspots of the current solar cycle. The active region sprawls across more than 200,000 km of solar terrain and contains dozens of dark cores. The largest could swallow Earth three times over.

The sunspot is almost directly facing Earth. This makes it a threat for geoeffective eruptions. NOAA forecasters estimate an 80% chance of M-class flares and a 50% chance of X-flares on Jan. 9th.

The best way to track "whazzup" with Ol' Sol is here: http://spaceweather.com

Yesterday, we reported that not one but three West Coast football teams are in the playoffs.  Well, you know those "West Coast Types."  Lo and behold The Seattle Times is promoting a Haiku contest to spur on their beloved Seahawks.  Back in the Midwest where most of the NFL teams are located, most football fans probably never heard of haiku.  When a newspaper promotes a haiku contest for an NFL team, ya definitely know ya ain't in Kansas no mo, Toto!

Meanwhile, down in San Diego, the enterprising interim Mayor there has done a foodie bet with the Denver Mayor on the outcome of this weekend's Chargers-Broncos game.  It's a fun story:

Many of our Dear Friends have worked at one time or another in the food service industry.  Our very first job was as a bus boy at an Indiana Holiday Inn.  And so it goes...  So this story is for anyone who has ever been a table server or interfaced directly with customers in a restaurant or bar.

Speaking of foodie stuff, the venerable Crock Pot surfaces once again in a Seattle Times article.  OK, stifle those yawns, Readers!  Buck Up!  This is a good story.  Honest.  I mean, really, here it is, OK?

Remember the two dummies who posted a video of themselves destroying rock formations in Utah? They sure got in a lot of trouble.Well, it seems this sort of "gee, look what we did" can get you in trouble in other ways, too.  This video cost these guys at least $225.  Nothing is harmed in the video but the moose sure is stressed.

We checked in on Tucson's Daily Star newspaper and could this little video of an informal Flash Mob in downtown Tucson.  One of our Dear Friends in Clarkdale is planning a Flash Mob for a Special Person so we figured we'd include this video for Krysta.

Last but not least, Shade The Raven is going to Meet The Public in Prescott Saturday.

If we were going to be around here Saturday, we'd go.  This will be our last Morning Edition for "awhile."  What's "Awhile?"  Well, we don't know.  We're heading out on a Road Trip Friday morning and don't know how long we're going to be gone.  Chances are we will be back next week sometime.  Exactly when is debatable so the word "Awhile" is about as close as we can get in describing our absence.

Thanks for reading.  Have a great day & Many Cheers!  jp