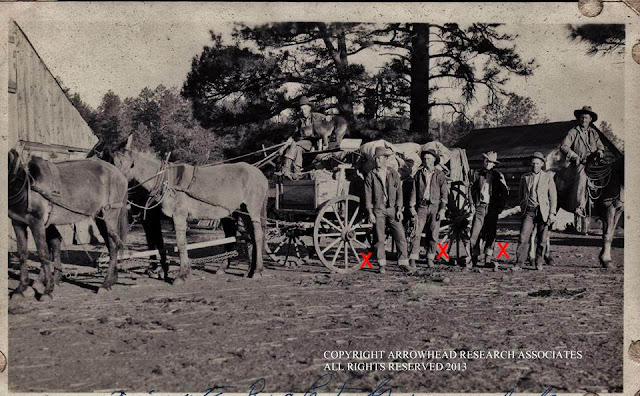 No, we're not talking about my DNA here, we're talking about my cheap jeans I buy at Wal-Mart for ten bucks a pair.  One of the downsides of being short is the fact that NO store-bought jeans on earth are made to fit short guys.

You wanna wear jeans, you gotta get 'em altered which is not the same as neutered but close.  I remember when people talked about "altering" their pets and it always made me a little suspicious of altering my jeans.  But, whatever.

Anyway, in my "mature years," as this phase of Golden Age is often called, I have begun to revolt against the idea of altering my jeans.  It's such a hassle.  Susun really doesn't much care for the chore and I am loathe to pay a commercial seamstress for alteration.  Somehow there's something a little suspicious about calling up someone to arrange an "alteration."

Well, over the past few years, I've begun to notice that back in the first half of the 20th Century, guys didn't bother to alter their jeans.  They just grabbed a pair off the shelf and rolled up the bottom to the right level and off they went ready for whatever adventures might come their way.

Somehow the style police decided rolled up jeans just weren't the ticket any more and we men have been suffering through the whole alteration process for at least as long as I've been alive.  Being short exacerbates the situation and generally means I dread the very idea of buying new jeans just because I then have to face the onerous alteration deficit disorder.

Well, getting back to the topic once again, Dear Friend and Historian Emeritus Bill Cowan posted up some great historical photos today on his Facebook.  I immediately noticed that three of the dirtbag cowboys have really spiffy looking rolled up jeans, as you can easily see in Bill's fine historical photo.

We're going to go to Wally World TODAY and buy a pair of jeans and roll them up and take the consequences.  So what if people think we are a fashion outcast?  Who cares if they think we're a Hicks from The Sticks?  What does it matter if people LOL when they look at me?  Heck, that's nothing new.  We're gonna GO FOR IT!

Anyway, we have asked for advice from our Facebook Friends on this weighty matter and eagerly await whatever wisdom wanders in.  What do YOU think, eh?  To roll or not to roll, that is the question!
Posted by John Parsons at 9:28 AM