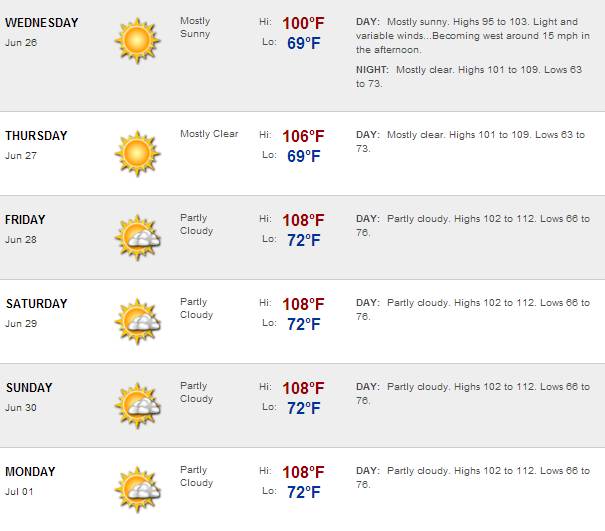 Ladies & Gentlemen, seriously high heat is coming later this week and there's going to be HOT STUFF over a huge, giant humongous area--like from Mexico to Alaska.

In Alaska temps could possibly push 90 degrees and, trust us, that's HOT STUFF for those far north latitudes.  Boise, Idaho, and Missoula, Montana, might make it to 105.  Salmon, Idaho, might be a wee bit cooler in the high 90's, maybe crack 100. YIKES!

When it gets this hot, there's no where to run, no where to hide--it's just HOT STUFF every which way.

We can't remember the hottest it ever was when we lived in Rimrock but we're thinking it was probably in the 112 vicinity.  We don't recall ever talking about a 113, 114 or 115.  You see, when it get's to 110, you begin to talk about each degree of heat as a separate entity.  Trust us, by some strange osmosis, you can actually feel the difference between 112 and 113.  It's kind of like the Richter Scale for earthquakes.  It's exponential once it gets above 110. (It's possible it might get to 120 in Gila Bend, so at least Rimrock will feel much cooler by comparison!)

The other thing we learned was that the location of our home in Rimrock saw higher temperatures than the so-called official "Rimrock high."  So, for example, if the official high was 100, it generally would have been 102-103 on our thermometers.  During the summer we kept generally 3-4 thermometers scattered around the property so we could have a pretty good idea what the high temps really, truly were.

If it really gets to 112 in Rimrock, it wouldn't surprise us to learn that it might be 114-115 at the straw house.  A +2-3 degree shift was common there.  Anything over 110 in Rimrock is borderline unbearable for most people no matter what kind of a cooling system they have.  However, when the temp pushes well above 110, it's really and truly HOT STUFF!

The trouble with the upcoming forecast high temps is that they are expected to last and last for days and days.  This is the time of year Arizona People get "cabin fever."  It's too hot to go outside so everyone stays inside and hopes the electricity doesn't go out.  Then they start getting "cabin fever" from all that indoors time in weird swamp cooler air.  Our hearts go out to our Dear Friends there.

People are all silently praying that a fire doesn't break out somewhere in the parched forest or range lands.
As the HOT STUFF scorches Rimrock once again, even though we are in Idaho, we pray that no one starts a wild fire.

Please, Dear Lord, keep Rimrock, The Verde Valley, Arizona and The Southwest safe from any more wild fires.  We pray for rain, we pray for the monsoon and we pray for cooler days ahead.