Arizona Spring doesn't wait for its Equinox.  Spring in The Desert comes whenever it feels like it.  Spring is Springing as we write our first blog post of March.  How do we know?
Those are a few of the "Here's Your Sign" indicators that Spring is here.  Spring always begins before its official Opening Day.  By the time March 21st rolls around, Spring is a done deal so this is about par for the course.  It's as if some unseen Alpha Javelina digs into the roots of a prickly pear cactus and accidentally flips an unseen switch.  Poof, Spring, just like that.  Happy March!

We dropped off Susun before 6 am this morning at the Camp Verde Wendy's.  She met Laura and the pair are driving over to Oceanside, California.  Susun is always so excited when she's taking off to see her Grand Sons.  It's almost like Christmas Eve when we were kids ourselves, only different.  Whenever she travels West by vehicle, she gets to take special "Treats for Tykes."  On this trip, she took two boxes of kid's books.  We betcha we'll be getting an iPhone foto real soon showing Mema reading to Gage and Van.

Chester The Sequester is coming to Rimrock.  Superintendent Dorothy Fire Cloud was quoted in the big daily newspaper this morning saying that Montezuma Well National Monument (AKA: Our neighbor) will "probably" close.  "Probably" in gubmint lingo means "you can take it to the bank, buddy."  The feds use words like "probably" so they can duck and dodge and weave early on and then pull the plug when they are back in the comfort of their cushy offices.  Local Ranger Rex thinks he will be the sole caretaker of The Well.  We will all know whether "probably" is really true by about noon today.  In 2011, officials figures show over 570,000 people visited The Well and the NPS claims the well helped boost the local economy by $30-million.  Even though the $30-million figure is undoubtedly fuzzy math, there definitely IS an economic impact to The Well and it will be surely and sorely missed here in Greater or Lesser Rimrock. 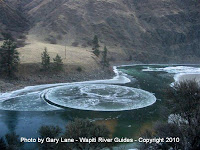 Our hootenanny continues with That Salmon Thang.  We did a really fun story that took the better part of two days.  The story discusses a great guy, Gary Lane, who created the photo of the now viral Salmon River Ice Circle.  Yep, that's Gary in the right of the photo with his wonderful wife, Barb. Years ago when he took the photo in late 2009, he had absolutely no idea the picture would prove so popular.  His own personal observations about the formation of ice circles and other ice-related tidbits are what makes the story so fun. It has been a genuine delight and gift to be able to communicate with Barb and Gary in the last few days. We swapped a lot of laughs and had a great time. You can click here to read the article we wrote on The Salmon Thang

And you can click here to read Gary's spin on the whole ice circle deal: