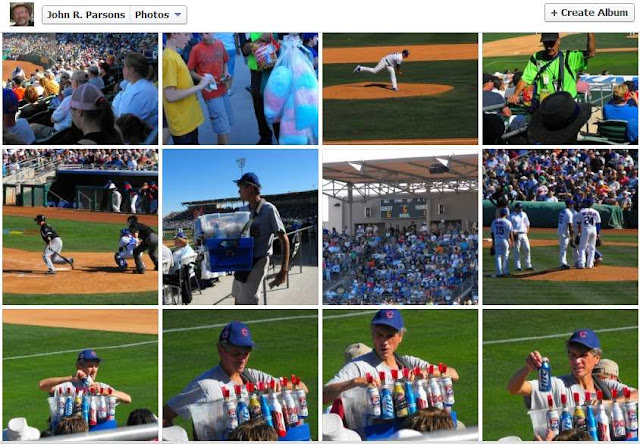 Well, here we are behind the 8 Ball once again. It's been almost a week since the last blog post.  We were doing a pretty good job blogging prior to this week. As long-term DFs & LBRs know, that's the way it goes sometimes.

Monday was tied up all day with the bi-weekly shooting match.  Tuesday somehow flow by getting ready to go to Phoenix.  Wednesday as a rush-rush day to pick up Susun.  Thursday was a blur that culminated in the Cubs-White Sox game.  Friday was a rush-rush back up here just barely ahead of getting caught in a major storm.  Saturday, so far, has been pretty lazy trying to recover from Monday through Friday.

We've actually been blogging quite a bit but it's all been on That Salmon Thang.  Things are going to slack off on the Salmon project since the Deadwater Ice Jam finally broke up sometime between Thursday and Friday.

Susun had a great time in California.  She learned an air guitar one-legged dance.  She's really stepping out with here air guitar dance thing.  Yesterday, she actually danced in front of a totally packed In-N-Out hamburger joint in Phoenix so she could see herself in the window.  Well, gee, that means all the diners dropped their jaws watching Susun dance in front of the big window.  You just never know about that girl.

Susun's taking off this afternoon to have a slumber party with a full house of girl friends.  Dear Friend Phyllis is graciously hosting the party which has been said to be in Susun's Honor.  We wonder how many times she will do the one-legged thing to entertain her girl friends?  The big question is whether the dance will become contagious and go viral...or feral, as the case may be.

We did not get to get inside the B-29.  Nope, it's a long story.  We did go to the airport four times on Wednesday and were unsuccessful each time.  Oh, well, it was a fun thought.

We had a really big storm yesterday here.  it dropped about an inch of pure rain on use and turned the place into a swamp.  Today is cold and gray and it's supposed to rain some more.  It's a good thing for the High Country as the storm dropped enough snow to assure at least a short river rafting season.

Looking ahead--Once Susun's Sunday-Monday hikes are history then we're going to buckle down and start chipping away at our chores here.  Yep, we're short timers once again.  We have less than three weeks to get our chores done before Susun heads back to Oceanside on April 4th.  She returns on April 13th and we leave here April 18th.  Soooo.....our Arizona Season is rapidly coming to an end.

Many Cheers, jp
Posted by John Parsons at 9:39 AM