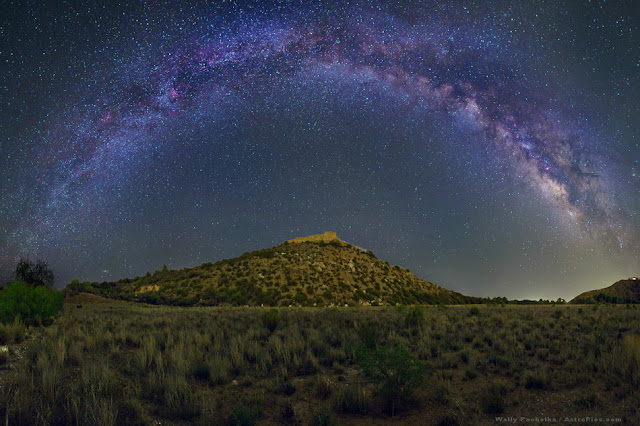 NPS Supt. Dorothy FireCloud was the most recent superintendent at the Wyoming Devil's Tower National Monument.  That's where she met Pacholka.  She told him about her new appointment as supt. of the three Verde Valley monuments and asked if he could make an image of the stars over Tuzigoot.  Pacholka obliged.  Supt. FireCloud then had the photo made into beautiful cards at her own expense.  She then gave a card to each person who attended her installation November 15.

Naturally, we were immediately smitten by this remarkable image so we emailed Pacholka last night. He replied about midnight and gave us permission to use a small digital version of this photo on our blog and Facebook.  The photo is copyright 2012 by Wally Pacholka and may not be reused without his consent.

Pacholka has taken the "Picture of the Year" for TIME-LIFE three times.  You can see his amazing astro photographer through his website.  is photo of the stars over Devil's Tower can be seen on this webpage: http://astropics.com/Top-10-Photos/

THANKS, Dorothy, for the Gift of that great card!  THANKS, Wally, for allowing us to use your awesome photo!
Posted by John Parsons at 7:27 AM