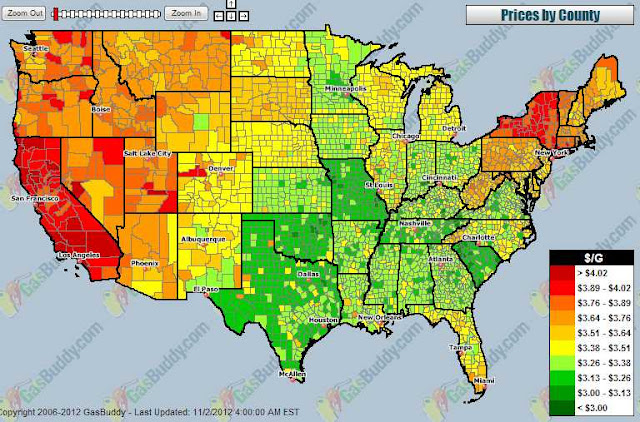 The graphic above is from Gas Buddy.  It's called the "Gas Temperature" map and it's updated regularly each day.  We've been using Gas Buddy since 2001 and it's proven to be the most accurate way of learning how your travel costs will add up on a long road trip.  We generally don't bother looking at Gas Buddy until just before each of our semi-annual migrations.

Basically, we assume it's going to take 100 gallons of gas to travel the 800 miles between our Snowbird roosts with three vehicles loaded with all our stuff.  You can quickly tell at a glance our upcoming trip beginning a week from tomorrow will cost us roughly $365 in gas costs alone.

Now it would be nice if our Western USA gas prices were as low as those you see back east.  However, even if we were paying the the cheap Texas prices, we'd only be saving perhaps $50-$60 on the overall trip fuel costs.

We generally mentally round the cost of each migratory trip to $500 total.  Typically, the costs add up to less than that but $500 is a good place to start.  The costs above gas include camping fees and food, etc.

While $500 might seem like a lot of money, consider what it would cost for two people to fly from Idaho Falls to Phoenix and then take public transportation to Rimrock, with a total of only four checked bags.  We might be able to get there for less than $500 by using Allegiant Airlines.  However, the fares at any other airline would easily exceed $500 for the both of us as this current calculation from Kayak. Com shows. 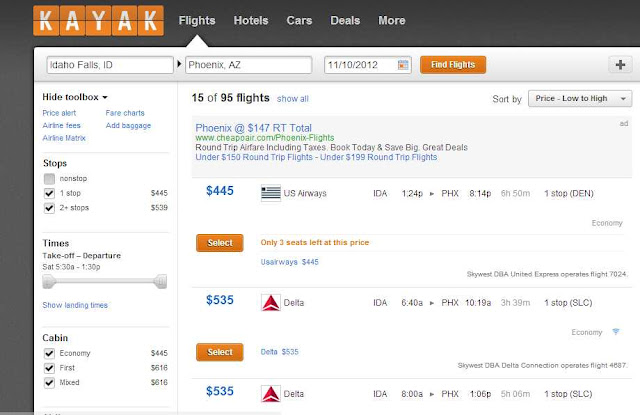 Also, we wouldn't have the availability of three vehicles, a poptop camper that doubles as a guest room and all our stuff all winter long.

Meanwhile, by turning off the water, electricity and heat here in Idaho Falls, we save an estimated annual cost of approx. $1200, depending on how cold the winter turns out to me.  That estimate could be as high as $1500 during a really cold winter but $1200 is a very solid baseline.

Essentially, our utility cost savings here more than pays for the two road trips to get back and forth, plus our electricity and propane for the Arizona season.  We're paying the same amount of money either way but, by being in Arizona, we get to enjoy all the great Snowbird Benefits of the place and see and have fun with all our Family & Friends there.

So, even though our upcoming gas costs always seem like a big hit to the wallet, if you put into perspective, it's really no big deal--the money's going to come out of the wallet sooner or later no whether we are here or there.  It's "six to one--half a dozen to the other," as Hoosier Old Timers are wont to say.