A Sweet Thank You Note

Monday morning, we received this totally amazing and awesome email:

"John, Dex, and Jodi.  A long time ago, you took us down the river for free rides.  Tammy and I fell in love with the river at that time.  We always wanted kayaks, and now we have one.  We love the Verde.  If we had not gotten on it 15 years ago, or so, we would not have known.  The last 4 times we have been on it, it calls us back even stronger.  Thank you for all you do for the River.  Heather and Tammy."

It was such a shocking surprise to have this email suddenly spring up from the inbox.  As many DF & LBRs know, we spent 20 years trying to get people "on the water" of The Verde River so the river could speak to them and work its magic on their hearts and spirits.  We estimate we directly involved about 1,000 people with river trips and so forth in the 1990's alone.  Precious few ever said "thank you."  Dex and I could probably count the "thank you" notes we received on our fingers and have a few digits left over.

So, getting this email yesterday was both Happy and Humbling.  It brought a super sweet sense of satisfaction and a very deep, warm glow to my heart, as well as many special memories of those go-go days of the 1990's.

Over the years, I always said to the river crew, "We will never know how the river reaches out to the people we're involving, but we must assume and KNOW that, indeed, the river WILL speak to them in ways that only each of them can hear in their own way.  Let's just do our job and trust that the river will do its job, too."

To get this note so many years later really validates the trust that we put in the river to be able to reach out and touch people in a way that only The Verde River can do.  Thank You so much, Heather & Tammy (shown below in their new kayak on The Verde) for such a great gift! 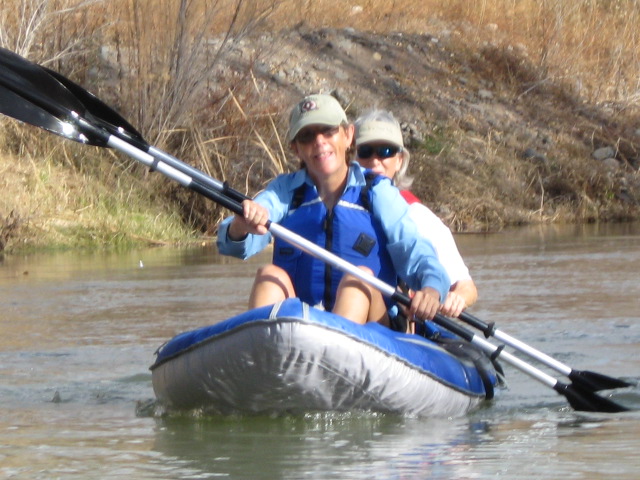 John - All of us who are adventurers touch people in ways we seldom know. You are fortunate to have touched so many people through your work on the Verde River. Wow! Way to go!