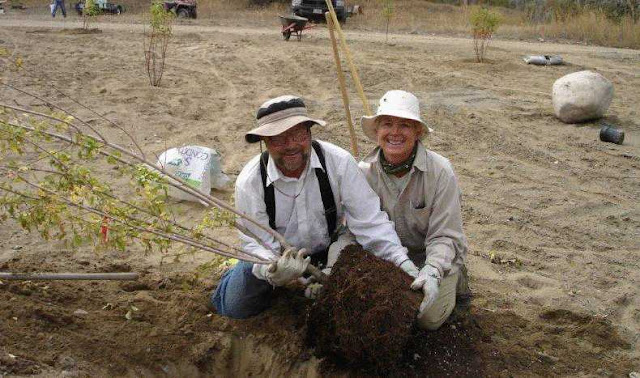 Talk about a "blast from the past."  Check this out.  This photo was taken in 2004 or 2005, we can't remember when because, um...well...that's been a long time ago.  It was on National Public Lands Day sometime in September.  The Challis BLM sponsored a tree-planting gig at the Challis Bridge Recreation Site near, um...well...you guessed it!--CHALLIS, Idaho!

We were out at Bowery Guard Station going a little stir crazy that late in the season so we figured we would volunteer for the BLM on their National Public Lands Day thing.  It was fun.

Our Volunteer Supervisor Jeff Christenson took our photo.  We smiled.  It was fun.  Time passed.  We forgot all about the details of the day.  Every once in awhile in the years since then as we whiz by the site on US Hwy 93 we say, "Remember that day we volunteered there?"  We both nod and whiz on.

Soooo.....today, late in teh day, along comes this email from Jeff who is now with the BLM in Dolores, Colorado.  Here's what he had to say, "Hey John and Susun, Looks like your smiling faces are going to grace the BLM State Office hallways for a while, hope that’s ok.:)"

That's all he said.  Well, it turns out Mister Modesty, Jeff, won three awards for his photography while with the Idaho BLM and his photos are now going to hang on the foyer of the BLM State Office in Boise. He dug up this old photo of us and entered it in the Public on the Land category and it won 1st Place.  Who'd a thunk it?

The photo is grainy because it's a copy of a copy that was used in a collage of all the various winners in teh various categories.  Anyway, that's our story and we're sticking to it.
Posted by John Parsons at 6:26 PM

Nex time your in Challis get some photos of this tree! Deano