I'd like to tell you a story about Disneyland.  Everyone on Earth knows about Disneyland.  My Mom kept really good track of stuff and she learned about Disneyland long before it became a buzz word of the American lexicon.  Being a little kid at the time, I have no recollection of how my Mom decided Disneyland was going to be a Great American Icon/Shrine.  Looking back, I suspect she knew it was being constructed and laid in wait, kind of like a two-legged cat hoping to pounce on Mickey and Mini Mouse.

Well, whatever the case actually was, there was no doubt that when Disneyland finally opened up, WE had to GO there.  According to Wiki, Disneyland officially open July 17, 1955.  I think it was 1957 when we finally got there.  I know my Mom had been jones-ing to get there for a long time.  I can't remember exactly how we got there but I know it was through Yosemite National Park and back along Old Route 66 through the Grand Canyon and then Mesa Verde. But I digress.

Anyway, when we finally got to Disneyland, of course, we all went nuts and thought it was the finest thing ever made and put together by human beings.  We spent hours upon hours there and, naturally, it changed my entire life.  I fell victim to the idea that Disneyland was reality.

Eventually, my parents tired of being in such a fantasy land and they made the cardinal mistake of saying, "You can stay here, we will come and pick you up later."  Well, that wouldn't have been much of a Big Deal except that they had purchased for me some sort of unlimited "E" ticket ride card so I could go on the "E" tickets rides like forever and forever as if they would last forever.

Naturally, I lost total track of time, as a young kid would be wont to do under such circumstances.  It turns out my Dad had to mount the equivalent of a search and rescue mission to find me that day.  I will never forget all the men who finally found me and surrounded me and sort of took me captive.  Perhaps I had momentarily gone feral.  It was like they were sort of roping me in.  Luckily, I didn't get thrown down on the ground and tied at the ankles like a roping steer.  That's how far "out there" I was that day---WAAAY out there.  My Dad wasn't happy at all and proceeded to tell me so in no uncertain terms.

Apparently, by getting lost in the delirium of Disneyland, I had violated an unknown rule of the Parsons Family that one could NOT have TOO MUCH FUN!  (Having SOME fun was OK--just not too much fun.)  Having too much fun was totally against all know rules of my Family History.  I was the first person, apparently, to grossly violate this unseen rule and was made to feel very guilty about it for quite some time in my life.

But they didn't.  Once they let me go, I realized that Life could be Disneyland and I've never looked back.  Indeed, Life IS Disneyland for those who can see and grasp the fantasy and imagination it takes to lead an "E" ticket life.

I will never forget moving to Tucson, Arizona on Valentine's Day of 1979.  I got off the plane and was walking across the tarmac of that old relic of an airport and I looked at the guy next to me and said, "Wow, this place is an "E" ticket!"  He looked at me like I was an idiot.

But, you know what, it's been an "E" ticket ever since and I am danged proud of having jump started my life at the original Disneyland in 1957, 55 years ago.

Now it seems that Disneyland is harking back to its roots.  Susun gets the "O" magazine, the one with the same woman on the cover every month.  I didn't have anything to read tonight so I began leafing through all the self-help, dietary and beauty tips that make up 99.999% of the "O" magazine.  Imagine my surprise when I spied a multi-page centerfold touting and pimping "all things Disneyland."

I ripped those pages right out of the slick magazine and scanned them in for this blog post.  Based on what I see here, Disneyland's reach and pull on the human imagination is just as alive and well today as is was 55 years ago.  VIVA DISNEY!

I have annotated each of the photos with captions below. 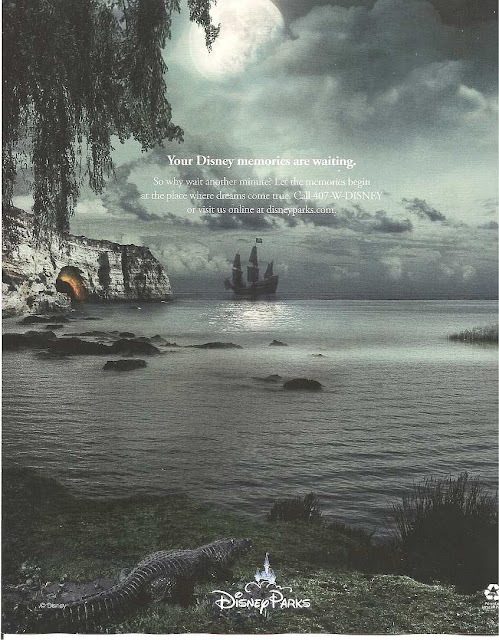 Do you see how they are marketing to Baby Boomers here?  "You Disney Memories are waiting?"
Well, I really like the one above with the light in the limestone cave on an unknown seashore.  Perhaps I am the lizard waiting to live Mark Twain's words:

"...So throw off the bowlines. Sail away from the safe harbor. Catch the trade winds in your sails. Explore. Dream. Discover." 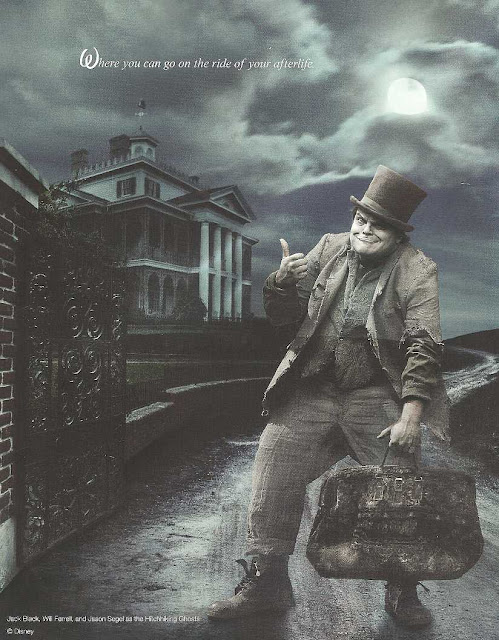 Ah, read the title of this Jack Black photo carefully.  Are they marketing to the moribund?  But I love the one below the best. 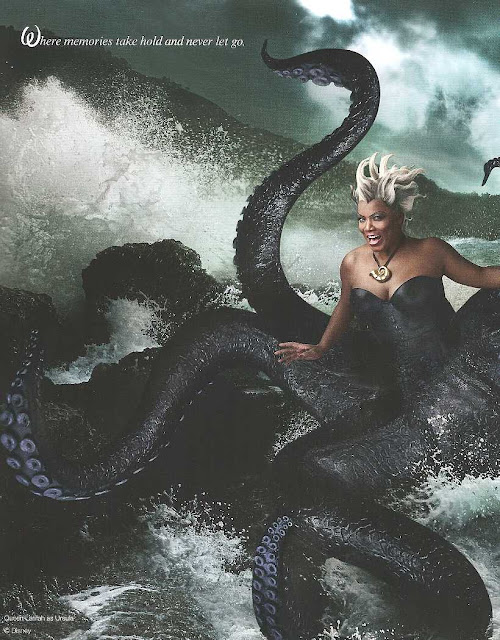 Where Memories take hold and never let go.  Is this not rich or what?  Queen Latifah in the grips of the tentacles of an octopus. And look at her glee!

As I close this tome on Disneyland tonight, I want to share another quote I found today:

"Twenty years from now you will be more disappointed by the things that you didn't do than by the ones you did do..."

We may not be able to revel today in Disneyland's debauchery, but we all still have the power and the will to do whatever it is we want to do and become.  Will we sit and wait as life passes us by or will we ride the gilded horse around the Merry Go Round to perhaps grab that elusive brass ring?

The choice is uniquely ours.
Every day can be our "E" ticket ride.
Disneyland is right around the corner
where memories take hold and never let go!
Hang on for the ride of Our afterlife--
Our memories are waiting!

So, Wayne couldn't resist even though he was probably running late to get to Lee's Ferry. He wrote this classic comment (in quotes). THANKS WAYNE, no we understand were you fell in love with the Grand Canyon. How apt that you are taking yet another "E" ride on on your favorite wave train!

"This is really stupid cause I need to get to Lee's Ferry. But the Disneyland post has just got me going this morning.

The spell that Walt put on your mom was also effective on my mom. Disneyland was like this great big reward we would get for being good. I'll post a picture of the three of us boys after our first visit to Disney land. Pure unadulterated joy!! It is priceless. Well, my mom would talk about Disneyland like she did about the Catholic church. Reverence. Walt must have really ticked off the carnival hands in SoCal because his spell involved dissing the carnivals. My mom told us that Disneyland would be there forever and that the carnival nuts and bolts were loose and you'd die if you went there. But you'd live if you went to Disneyland.

One summer my best friend Sam - he lived 3 doors down from us and we were the same age. Sam was my best friend for 10 years from age 5 to 15. Well one summer his dad said to us (we must have been 11 or 12 with paper routes and thus lots of moolah). He says, "If you boys pay your way into Disneyland, I'll drive you there and pick you up as many weekends as you like. Sam and I literally spent our summer weekends at Disneyland.

One time we got so "familiar" with the place that our whole visit for that day we just sat in the caboose of the Train that encircled the park. All DAY! It was cool. On that train - between Tomorrowland (get it?) and Main St., there was a tunnel and in that tunnel were two diorama's - the first was called the Primeaval World and had dinosaurs roaring in front of an ancient Landscape. The second diorama was called Grand Canyon and there was a realistic backdrop of the canyon with a mountain lion in a ponderosa tree roaring at the riders on the train. Now where do you think I got the idea to be enamored with time and Grand Canyon. Duhhh.

Just before Wayne posted the above comment he wrote "John - Just heading out the door on a 10-day river trip - the LCR just jumped up to 34,00 CFS overnight! Moenkopi Wash is running 4700!

Anyway the Disneyland post was fantastic! We definitely need to have a DIsneyland night when you return. I've got stories. YOurs was fabulous!!!!!!!!!!!!!!!!!!!!

John: I still have never been to Disneyland. My parents would never take me. So at age 21 while living abroad I took up my own Disneyland "you've got and e-ticket to ride..." called whitewater kayaking. And the fun has stopped since then. Living abroad and taking up kayaking forever changed my life, too. I never wanted to be closing in on 60 and saying "Gee, I wish I'd done such and such." I know in my 57 years I've had mountains of unadulterated joys, trials and tribulations I wouldn't trade for anything in the world. Just today I was thinking about a trip to Cuba. It'll have to come a bit after the most important yearly trip COR in lively little Almo, Idaho. See you soon.

And how about Wayne hitting the mighty Ditch at 34K cfs? Well, he won't be seeing National Camp. I am told we were probably one of the last trips to camp there June 30 before the monsoon hit and took it out completely.

Fantastic!!! This post and comments have stayed with me all day. One of your best ever, John. I'm gonna get in line at the ticket booth.

When I was little we went to CA nearly every summer. I got to ride the Sunset Limited with my grandmother while my mom and big brother took the un-air conditioned Pontiac across the desert. Disneyland and Knott's Berry Farm were WAY more crucial visits than the beach.
In her later years it became a tradition for my mom to make sure she was the first to take each of her grandkids to Disneyland. When Josh turned 4, in August, she was getting sick again but told me to plan a precision strike on Disneyland for him. Not a typical CA vacation with a packed car and long drive; we flew to Anaheim, shuttled straight to the Disneyland Hotel for two days, shuttled back to the airport and came home. My mom in her free loaner wheel chair insisted on watching Josh ride every ride he was big enough to go on and she went with him on all she was able to. It was her last grandkid's trip. She left us the following March.
There must be a special place in the hearts of millions of former kids for Uncle Walt and his Magic Kingdom.