Yep, it's 46 degrees outside here at 11 am this morning.  It's trying to rain, too.  Periodically, nice large drops of water will come out of the sky.  Mostly, though, it's just gray and cold with a chilly breeze to top it all off.  Just another typical Idaho Spring!

The life long locals here like to say this always happens on Memorial Day.  We've never checked the climo records to see if it's true.  It's been mostly true since we arrived here.  Here's how it unfolds.  The Saturday of Memorial Day is the traditional Opening Day for fishing in the high country.  Each year, hoards of Utah residents flock north to fish.  A nearby community (St. Anthony) has been offering a free Fisherman's Breakfast for danged near 50 years.  As the story goes, the weather always turns sour when the Utah people head north for their free pancakes.  In many recent years, they've been snowed on, hailed on, rained on, blown to another county with 50 mph winds.  Whatever.  The weather is supposed to be nice once the hub bub subsides over Opening Day weekend.

Five years ago today we were having quite an adventure.  We camped the night before at an RV park in Bluff, Utah along the San Juan River.  The starter on our big truck failed so the owner had to tow us and our travel trailer around the park to get us started.  Then we drove north to Moab and left the truck run while we found a mechanic who promised to do the job right away.  We have to unhitch our trailer and leave it in town while the truck ran and then take it out to this guy's shop.  We got the starter swapped out and then drove up to Green River State Park in the nick of time for Happy Hour.  Close call.

BIG NEWS here in River City!  Joshua Wheeler is coming to visit on June 15.  He will stay until June 29.  He's flying up and back from the Mesa Gateway Airport.  Josh has never been north of the Arizona-Utah state line.
We're going up to do more field work on The Salmon River for about a week.  Then we will commence with The Grand Tour of Yellowstone and The Grand Teton National Parks.  We might even be able to squeeze in a trip to Harriman State Park, too.  We are all excited about the whole thing.

Susun is in the middle of her annual Hilda Garden Flower Thing.  She and Dear Friend Dina have been poring over scale drawings of the garden beds, as well as spreadsheets that describe flower colors, size and foliage.  They are such a great team together.

There's nothing planned for the weekend.  However, on Monday, Jeff (Houn' Dawg) and Suzanne are coming for our traditional Summer Kick Off Breakfast.  That promises to be a real hoot.

The Spudboater is really busy these days.  She's getting ready for a big Grand Canyon rafting trip.  Plus, she's putting in a big garden, reclaiming lumber, volunteering at a food bank.  She's a real dynamo!

Wayne Ranney put up an amazing blog post on the recent eclipse.  Click here to see it.

Maggie is thinking about starting a blog for her tomatoes.  In the meantime, they are growing like, well...tomatoes.

We scratched our travel plans for next week.  We are getting backlogged on stuff around the house here.  No point in stressing ourselves out about it--just stay home and get stuff done.

We will try to intersperse our Yellowstone photos with this and various upcoming blog posts.  Below are five photos of The Bear Jam we encountered Saturday afternoon.  First, of course, there is Mister Grizzly Bear foraging for grasses and forbs in a meadow.  The bear is oblivious to everybody on the roadway.  He sure looks contented and relaxed, doesn't he?

Next, there is The Bear Jam.  That's official jargon for what happens when a large group of tourists all stop and gawk at a bear. The bear went on about his business.  In the meantime, a swarm of people snapped digital photos by the hundreds (if not the thousands) while passersby craned their necks outside car windows.  We've only been in one other Bear Jam--a winter jam near Jackson.  This one was bigger and better. 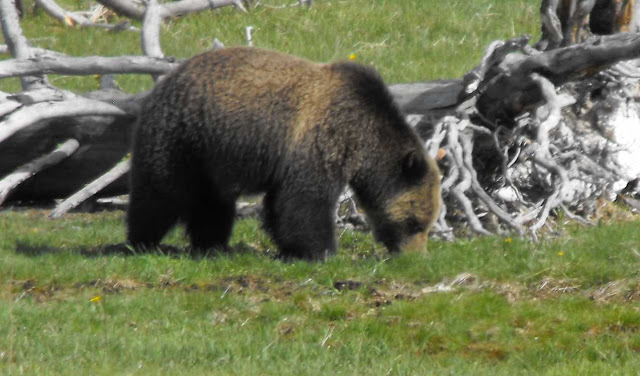 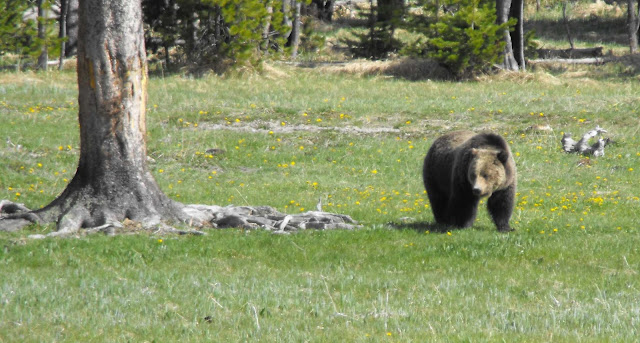 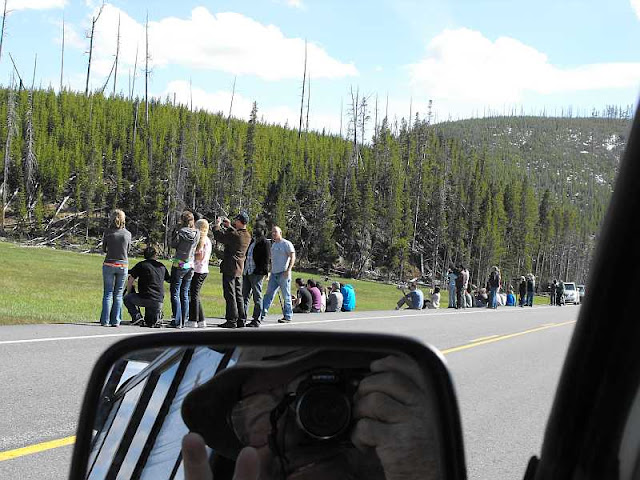 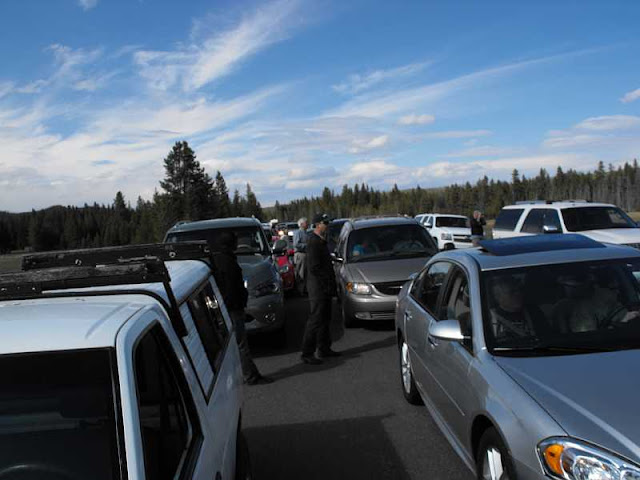 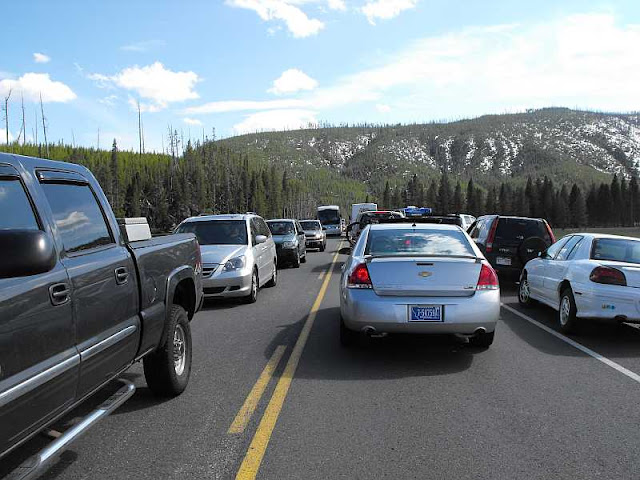 So, you were a participant in this bear jam? What is called when we are looking at moose? We were in one if those when Sarah and I were there. There were alot of moose milling around...