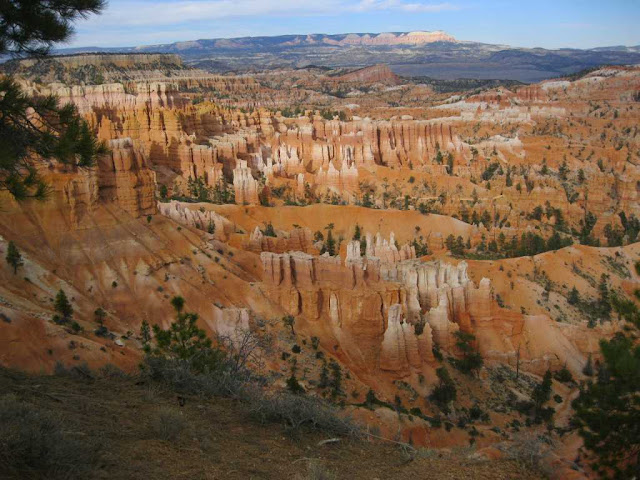 Greetings from Bryce Canyon National Park.  We arrived here Tuesday about 2 pm, roughly 5 hours after we left Vermilion Cliffs. (Most of the blog post below was written yesterday with some narrative added this morning.)

Bryce holds special memories for us.  We didn't know diddly 'bout Bryce prior to 2001.  That's the summer that changed our life when we became US Forest Service volunteers.  That's when we "discovered" Bryce Canyon.  It's not really a canyon--far from it.  There's nothing canyonesque about this place.  It's a plateau with a wildly eroded flank pock-marked with geologic voodoo and peppered with hoodoos.

The plateau itself sticks up in the sky like an outfielder's baseball mitt.  Just like an All-Star outfielder, the plateau to which Bryce has brought worldwide fame sits here and snags a big slug of snow from every passing storm.  Storms can's seem to dodge Bryce's skillful catcher's mitt.  Nope, if a storm is passing through, it's going to either rain or snow on the slopes of this plateau.  Consequently, the easily erodible rock has been shaped into all sorts of wildly weird and wonderful shapes and sizes.  People see all sorts of anthropomorphic stuff at Bryce.  Heck, now two people see the same things when they look out across this geologic Disneyland.  Bryce's rocks are on one hand purely definable by some sort of measurement.  On the other hand, Bryce's rocks are like snowflakes and no two are the same.  The time of day, time of year, perspective of the beholder and much, much more combine to make the total of Bryce far greater than the sum of its bizarre parts.  That's why this place captivates people.  It's a small and personal National Park.  People can feel like they can get a grasp on this place.  Everyone knows that NO one can get a true grasp of the Grand Canyon.  It's too vast, too truly out there for anyone to walk away from a casual visit to the Grand Canyon thinking they have a handle on the place.  Well, Bryce at least gives you the illusion that you can get a grip on the.  Tourists love that illusion and they leave here plum satisfied, kind of like purring kittens who just finished sipping fresh cow's milk.  That's the warm and fuzzy feeling Bryce imparts on its millions of visitors.  That's one of the many reasons we fell in love with Bryce way back when in 2001.

We love the tent campground.  Oh, how that tent campground taught us so many lessons.  We're not in the tent campground today--we're in the RV campground.  Susun thinks we ought to be allowed in the tent area but she will have to do her own research to find out.  Me?  I'm content to sit here in Space #245 and bang away at this netbook.  Who knows?  Maybe we will find some WIFI here and get to post up some blog stuff soon.  Wouldn't that be a novel idea? (We discovered later yesterday afternoon that there is free WIFI here--hence this post exists.)

Well, one thing we know for certain here at the Sunset Campground--we can walk to the Bryce Rim in a short, casual stroll.  Back in the day when we spent many a night here, we learned we could walk to the venerable old historic Bryce Lodge before sunrise and get a free cup of delicious coffee and then take the coffee out on the Rim to watch the sunrise.  Talk about romantic.  They don't do free coffee any more.  It's strictly BYOC. Man, I'm here to tell ya that you haven't seen a sunrise until you've seen a sunrise at Bryce.  Yeah, I know that sunrise at Grand Canyon can be great, too, but it's a tad bit overwhelming.  Bryce?  Not so much.  You can feel like you are a real participant in the sunrise here.

You can bet we will be out on the prowl tomorrow morning well before sunrise.  The sun was coming up at Vermilion Cliffs at 6 am sharp.  It will surely be earlier there so we will have to rally up and be out and about by no later than 5:30 am.

The 50 miles of trails at Bryce are about as good as day-hiking trails can possibly get.  Sedona has THE best day hiking trail system in America.  Hands down, case closed.  But Bryce is running neck and neck with Sedona.  Bryce lacks the sheer magnitude of mileage found in Sedona and doesn't have the geologic variety either.  Plus, Sedona has trails near water.  Water at Bryce only exists in your mind.  You have to visualize water and wind eroding the fantastic shapes here.  But Bryce's trails are pretty danged amazing.  We love them. We've often said that we don't think you could get tired of hiking the same trails here because the way the light changes you're going to see something new each time you travel the same route.  It's that snowflake thing again.

We have a Dear Friend who works here and with any luck, we will get to see Marilyn during this long, leisurely visit.  We have already talked about Marilyn on this blog but it's going on two years ago now.  I guess we will simply reference the earlier post rather than make this one too long.

There's lot of cool stuff here in Bryce.  Have we told you we love this place?  Let's see, here are some of the other reasons: heated bathrooms with flush toilets and running water; hot showers for two bucks a pop; a laundromat; free WIFI at the Lodge; a great store with cheap prices on everything; friendly campground hosts who tell you they want you to be happy; no bear nazis; very strict rules on generator usage; an awesome visitor center; forever views supposedly stretching to New Mexico; recycling bins everywhere; a healthy ponderosa forest; tidy, spacious campsites with brand new fire rings; and so much more.

Well, it's great to finally eddy out in Bryce on one of our semi-annual migratory trips. It feels great.

Two outstanding blogs. I can tell how lovely everything was at Vermillion Cliffs. Susan K could easily pass for 50, not 72. A good life led by her clearly. And I'm glad to see you didn't sell my home away from home, at least not yet. That pop up truck camper is the cats meow. I know it has good vibes for wi-fi cause I could use yours when I stayed in it at 2CR. Enjoy your time at Bryce. I've never been there myself.